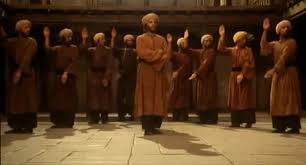 In 2013, a review I wrote of the MP3 recording of A.G.E. Blake’s reading of Meetings With Remarkable Men was published in a blog. Since then, I have revisited it. the review needed little change, but I felt it was worth placing on this page.

In addition to the impact of hearing the text read, before hearing this recording, I had not realised why Meetings benefited by being heard as opposed to being read. It is, I am fairly confident, because by making the effort to follow the spoken word, we receive the text in a new tempo. My accustomed tempo of reading to myself allows me to pass over small words and phrases so lightly that they leave no appreciable impression. I subliminally notice certain parts and ignore others. The same is not true when one hears it read, at least not to the same extent.

But the value is even greater when the reader takes it at a pace influenced by the contents and nature of what is being read. Blake does not read at all theatrically, but allows each word its weight. The result is that countless passages, sentence, phrases and words burst into meaning for me. I shall not give examples, lest I rob the reader of his own discoveries. Suffice it to say that listening to this CD has brought me closer to Gurdjieff’s ideas and methods, and, I think, helped to balance my perspective on them.

We have to start with the story as it is, even though the text is clearly auto-mythological (I thought that I had coined this word, but others have used it too. I suppose that it is quite obvious as a way of referring to an apparently autobiographical work which offers mythology rather than biography). The text may work within us, through the mysterious laws of association (deep calls to deep) suggesting different interpretations, dimensions and connections. But there is no need to analyse it: there is no need, that is, if one has accepted the narrative as if it were history. The book is addressed to the whole of us; it is a loss to redirect the invitation to the head.

The movie, gorgeous as it was, comprised a series of vignettes held together only by chronology. The Blake recording showed me what the film missed: the movie omitted Gurdjieff’s narration. Of course Gurdjieff was shown in it. Yes, but not in his most important role, that of narrator. Hearing the recording, one cannot but be struck by the presence of the narrator. Almost all of the words, phrases and sentences which now burst into meaning for me were spoken by the narrator: they provide coherence to the inner content. To leave them out is to make a necklace without some of the most important beads and without any thread. When de Salzmann made the Lubovedsky incident the climax, she lost Gurdjieff’s chosen ending: the last reunion with Skridlov. Re-read that last paragraph, the one commencing: “Formerly, it may be said …” and you will see what I mean. That is where the movie should have ended: anything else misses the point, which is Gurdjieff’s point.

This leads me to the last example I will offer of my revivified interest in Meetings. It also strikes me that Gurdjieff may have been telling the literal truth when he told of the “duel with cannon”. I have often wondered why Gurdjieff’s system never produces people like himself. From time to time, piano teachers have pupils who are as proficient as themselves if not better. The same happens everywhere, in sports, art, literature, science and religion. This never happens with the Gurdjieff work. It is said that Gurdjieff himself declared that anyone could achieve what he had if they were prepared to suffer as he had. I do not believe it. Many people in groups have suffered very considerably, and yet no one even comes close to Gurdjieff in terms of being and understanding. Why? Could it be that Gurdjieff’s experience on the cannon range was, for him, an artificial organ “to constantly sense and be cognizant of the inevitability of his own death as well as the death of everyone upon whom his eyes or attention rests”? Perhaps that accident allowed Gurdjieff to make a breakthrough. One could not set out to repeat that now, for one’s very identification with the goal would hinder the aimed for result. However, if there is something in this, it could help to explain the strange paradox which led Ouspensky to despair: the system seems true, but the promised result of development never proceeds beyond a limited level, which is hardly distinguishable from the level one finds in life.