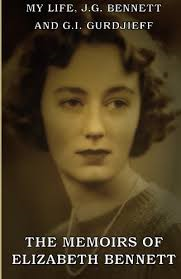 This interesting book, really a collection of chapters, is welcome, not least for its insightful portrait of Gurdjieff in his last year. The guiding thread is perhaps Elizabeth Bennett’s states of consciousness, from her childhood, through to some remarkable experiences as a young adult, and to her meeting with J.G.B., then Gurdjieff, and her life with Bennett afterwards. The earlier parts, especially those dealing with her girlhood illnesses and her time in the WAAF during WWII are rather more fully drawn than those dealing with the period after Gurdjieff’s death.

Elizabeth Bennett herself emerges as a “remarkable woman”, if it is not to presumptuous to use that phrase. Her insight into Gurdjieff’s teaching methods and his interaction with J.G.B. alone, would demonstrate that (93 and 97). Similarly, she saw that something in her which saw itself as sinful, imagined that it therefore understood humility (99). It is interesting how these things work in us: something in me has an attitude of sinfulness. Good. But then having that in me, there somehow develops, subliminally, of course, an attitude that I therefore understand humility. But how does it develop? Is it something else in me which attaches to the self-accusation of sinfulness, and uses that as a pretext for the false assumption of humility? And when would it do that, when my image of myself is under attack? At this stage we’re starting to see the development of the different “I”s.

To return to this book, however, perhaps the most striking impression I received from it is of her first view of Gurdjieff: “I saw a shadow fall across the glass panel of the upper part of the door. There was a fumbling at the handle and then the door opened and Gurdjieff came in. As he came, he looked directly at me, and all my former ideas and expectations fell away and never returned. … his eyes, large, dark and sparkling beneath his massive brow and the great dome of his shaven head, expressed nothing but compassion. I have never seen a creature more beautiful, more radiant of love and understanding. He could not, I thought, be of this world. From moment I loved him. … I could not tell who or what he was, I only knew that for the first time I was in the presence of a being totally different from myself” (73-74).

But then, after that, there comes the “monstrous vision” of pp.78-80. I once had one similar to Elizabeth’s. It was not nearly as strong, and I did not ever contemplate suicide, as she did. But I did have that sensation of horror and the sensation that this was how it was, but I had not seen it although it was all around me. I think the major difference between what we saw, however, was not just that her vision was huger (so to speak), but that even at the time of the vision, I knew that I was not myself completely awake, at least not in a balanced way: I knew that I was lacking feeling. I knew that I was lacking compassion for the sleep-walkers I suddenly saw, and I realised that I shared in their condition. I could see that the revulsion I was experiencing was not the result of a rounded self-awareness.

Perhaps one could apply to such a vision, Gurdjieff’s advice to her during a movements class: “Necessary symmetry!” (104). What is needed, without doubt, is what she described of her experience in those classes: “For those two hours, the attention in three centres was so fully occupied that there was none left for negativity, imagination, associations …” (104) Without such a state, our consciousness is devoid of the perceptions of the higher centres and higher parts of centres, which are more impartial.

This is a valuable book, taken from the notes of a remarkable woman. I would recommend you purchase it, and read for yourself, pages 117-118.