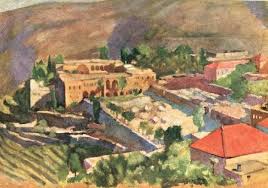 The road to balance is a long hard one. There are moments when one’s state is so high that it seems as if one will always be lifted up. And in that state, of course, questions of balance do not arise, because imbalance seems impossible.

However, being what we are, the state of collected presence does not last so very long. And those states in which a powerful affirmative feeling elevates us are even more fleeting. One is more often in a state when balance seems unreachable than in one where it is present and sweetly maintained.

I wish to mention one particular issue which I have found unbalancing, and that is a disproportionate reaction to painful memories: memories of mistakes and worse which I have made. I even have bad memories of being present when other people mistakes: those too can make something in me squirm. I am speaking, I suppose, of an excessive sensitivity to painful memories. It is not the same as guilt, although sometimes it is. But I can deal with guilt more easily, because I can repent. For irrational and disproportionate self-flagellation, however …

Probably as a result of all my efforts taken together, it is nothing like what it used to be, not that I ever needed medical help for it. But it is a sign of a state of being in which intellect and feeling are not harmonised, and so runs counter to my aim. Further, there have been periods of up to a month where it has been entirely missing (although it was perhaps present but passive rather than missing). While it has not disappeared, it has ameliorated so much that I have an objective hope that it will become so passive as to cease to annoy me, only to remind me. Then indeed it shall be, as Mr Adie would say, like the tamed dog which followed its master. I think that something like this must be behind Gurdjieff’s much misunderstood comment: “Angel help you, devil help you.”

I have long understood that there is a question here of the wrong working of centres. In particular, something intellectual in me does not like something in the past, and then the reaction becomes emotional. Specifically, it is a negative emotion which arises.

But, I see now, and this is only a recent insight, that feelings are not made to be continually reawakened and refreshed. Feelings are to show us a side of something present, some behaviour or situation, and to get beyond what the intellect or the senses could tell us. Feelings are like a sort of radar which can give a subjective knowledge of what would otherwise be unperceived: another person’s feelings and emotions, a shade of intent, a question of sincerity or insincerity, or care or carelessness.

The big danger, of course, is what Gurdjieff said of hysterical women: she feels everything, even what is not there. And that has caused me trouble in my life: my feeling what is not there, and other people, not only women but also men, acutely aware of something which they are imagining.

Yet, with time we become more discerning. We learn better how to weigh our emotions and to come to our feelings. Feeling always brings presence of myself, emotion does not, it carries me away.

The point here is that when painful memories arise, they can and should be treated as something to logically confront: am I still like that? Can I change? How? To experience them as present torments is to distort the true purpose of feeling. When we recall the past, what is appropriate is a reflective sort of feeling, perhaps remorse, or gratification. I can even have a gentle (meaning non-violent, unexcited) sort of desire to understood where I went wrong. But these are feelings which mark a present understanding of something once misunderstood. There is no room for self-hatred. But then, negative emotions have no reason in reality.

So there is something objectively wrong in emotionally dwelling on the past. I had not been sure that there was. Something in me always wondered what was wrong with kicking myself. But now I am sure that that is a distortion, the insight is liberating. I am also grateful to Gurdjieff because without his system of ideas and techniques I could not have come to this.

On p. 111 of the second edition of George Adie: A Gurdjieff Pupil in Australia, I mentioned how Mme Jeanne de Salzmann had told Mr Adie that it was good to remember the death of Gurdjieff on 29 October, as he did by taking his group to a Russian Orthodox Church each year. Gurdjieff had brought a way, she said, and when we observe the 29th, we come to feel more and more our connection with him. Even those who did not know him, but only his ideas and methods, can come to feel a more personal connection by this means. This is why I have written this, from my own understanding. It is also why I shall be offering the Divine Sacrifice of the Mass for the repose of Gurdjieff’s soul tomorrow.

But one last thing. Today I rang a friend to wish him happy birthday. Neither of us are great ones for birthdays, but in this case it was right: I wanted to acknowledge the spirit of life which I feel coming through him and his work. His birthday reminds me of that. It is even more serious than that when it comes to Gurdjieff, and the day he left this world.