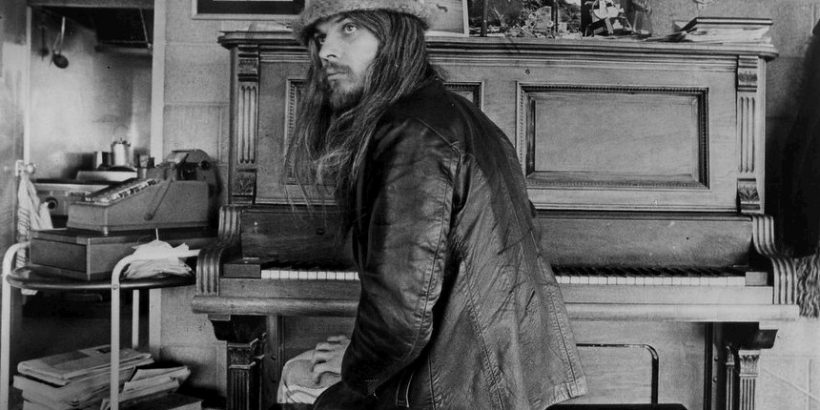 Sublime, poignant, elegiac: that is “I Should Have Sent Roses” from The Union, by Elton John and Leon Russell. In Gurdjieff-influenced terms, I would say that the person who wrote this had to be in a heightened state of self-consciousness. He had to be present to the workings of his feeling centre to allow this lyrical and moving melody to emerge without constricting it. Some melodies owe more to moving centre, others owe more to emotional or intellectual centre, and some, such as this, are products of the higher emotional centre. You can tell straight away that this was written from somewhere essential. (For an explanation of the centres, see Sophia Wellbeloved, Gurdjieff: The Key Concepts, 133-5; and for “essence”, see 71-3.)

Leon Russell, who has produced some of the most lyrical melodies of the last fifty years (e.g. “This Masquerade”, “Stranger in a Strange Land” and “Superstar”), reaches new heights with this masterpiece. I would place it almost on a par with the melody of Lennon’s “Jealous Guy”. And yet Leon Russell did not create it: no one but God can create. However, it is to Leon Russell’s credit that he could arrange the melody which arose from somewhere within him. You recognize its source only by knowing it within yourself.

While my response is, and must be subjective, I feel that the melody perfectly matches the lyrics by Bernie Taupin, which tell the story of a lost love from the point of view of the man who has lost. The boy knows that the girl has gone, and that he bears responsibility. When he was with her, he took her for granted. Ambivalently, he goes on to say both that he would treat her better now, and that she deserves someone more thoughtful. He addresses her with understanding and self-deprecation:

“Are you standing outside? / Looking up at the sky, cursing a wandering star? / Well, if I were you, I’d throw rocks at the moon / And I’d say, “Damn you wherever you are!”

This is so apt that it’s almost humorous. A “wandering star” because, perhaps, he did not fit into his place in the order of things. Throwing stones at the moon, maybe because the moon is for lovers and lunatics: she being the lover and he the lunatic.

“I don’t know where to start, / This cage round my heart locked up what I meant to say, / What I felt all along the way, / Just wondering how come I couldn’t take your breath away.”

At various times we all feel something like this expression of mixed confidence, self-doubt and exasperation – at the same time that he believes she should have been overwhelmed by him, he confesses that he is confounded that she was not. We often feel that we have long wished to express something but that we could not, just could not, because of a sort of emotional tightness. It is as if we would choke were we to try and say it.

“‘Cos I never sent roses. I never did enough. / I didn’t know how to love you, though I loved you so much. / And I should have sent roses when you crossed my mind, / For no other reason than the fact you were mine.”

This is strange but true: we often feel that we love but do not know how to put that love into action. And of course, there are two errors: to think that an overt action is always needed, and to forget that actions are often needed. It is only people who are thinking philosophically who imagine that no action is needed.

“Looking back on my life, / If fate should decide to let me do it all over again, / I’d build no more walls. / I’d stay true and recall the fragrance of you on the wind”

This is the paradox which Ouspensky paints in unforgettable terms in The Strange Life of Ivan Osokin. We make a mistake, we forget ourselves and our higher aims. Then we believe that if we had the opportunity again we would not fall into the same trap. But should the occasion arise again, we would make exactly the same error: we would forget at exactly the same place. And yet, there is a way to escape from the curse, and that is to remember oneself, hence the importance of Gurdjieff’s ideas and method to religions and religious systems.

The reference to fate is especially interesting to me, because it is a topic which is exercising me at the moment. Fate acts only upon essence, and this song, as I have said, is an essence-song. It is only when we are closer to essence that we can start to have any sense at all of what our destiny or fate is: that is, what it is that we are called to above and beyond the vicissitudes of life. If there is a “law of accident”, there is also a “law of destiny” which works itself out despite whatever other causal connections and chains may be playing themselves out and, I would suggest a “law of miracles” (see “Fate” at 80, “Law of Accident” at 115-6 and “miracle” at 144).

“You’ll do better than me. / Someone who can see, / Right from the start give you all that you need / And I’ll slip away, knowing I’m half the man I should be.”

There is genuine love here: for love seeks what is best for the beloved irrespective of the cost to oneself. Also, love brings impartiality, and the statement, “knowing I’m half the man I should be”, is a good impartial description of each one of us.

The topic of “lost loves” is a significant one: a person who never wonders about past friendships and romances and why they ended, to use a neutral term, is quite possibly incapable of reflection. I have published in the second edition of George Adie: A Gurdjieff Pupil in Australia, one of the most important pieces I ever transcribed from Mr Adie’s diaries, just on that topic. Bernie Taupin is also responsible for one of the most touching songs Elton John ever wrote, on this same topic of lost loves, the much under-appreciated “I Feel like a Bullet in the Gun of Robert Ford”. And in each case, “Robert Ford” and “I Should Have Sent Roses”, Taupin was working with one of the greatest songwriters of his generation, and each result has been a masterpiece.

And that brings me, briefly, to the topic of the late and great Leon Russell. There is no doubt of his uncanny talent. As I have already said, I feel that he produced some of the greatest songs of our time. For my money, his piano playing was better even than that of Elton John, and I am an Elton John fan. I remember, in the 70s, thinking that Leon Russell would go on to conquer the world, as they say. But then something happened. What? To an extent, perhaps, he sabotaged his own career. At least in my view, it was never the same with him after the 1975 album Will O’The Wisp. Then, Elton John enticed him to The Union in 2010. Russell’s own account of the production of that album is found on “In the Hands of Angels”.

Still, while the arrangement is rather more heavy than I would like, it is extraordinary that after so long out of the public eye, this man of astounding abilities would return and reveal so much about himself. I think that took strength. Well, goodbye, Leon. You will be missed, but you won’t be forgotten.