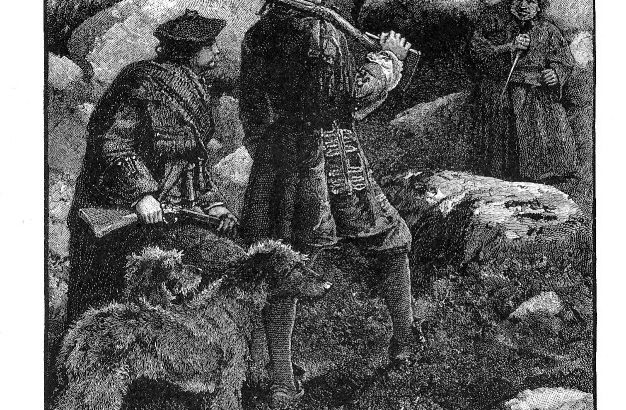 Having said something about the purpose and possibilities of literature, and introduced Walter Scott’s 1816 novel The Black Dwarf, I shall now discuss its contents.

As stated, the chief figure in the novel is the Black Dwarf himself, also known as Elshie (Elshender) the Recluse, and later revealed to be Sir Edward Mauley, long believed dead.

His opposite is the duplicitous Richard Vere, a Jacobite, who for purely political reasons wants his daughter the beautiful and virtuous Isabella to marry the odious Sir Frederick Langley. So far as I know, it was an original of Scott’s to have Vere arrange the abduction of his own daughter. At first he does not distinctly say so, only leaving the clues in plain view. By raising our suspicions, and piece by piece confirming them, until Vere’s declaration, Scott skilfully involves us in the detection of this hypocritical and cynical character.

The noble and loyal Hubert Ratcliffe is the Recluse’s only confidante and friend. One of the most interesting personalities in this novel, his speech to Isabella Vere urging her to seek the Dwarf’s aid, expresses, I suggest, the heart of the novel. Two parts of it are critical. First he says:

“He (the Black Dwarf), at least, was fully aware of his own deficiency; the sense of it haunted him like a phantom. … ‘I am, in spite of what you would say, a poor miserable outcast, fitter to have been smothered in the cradle than to have been brought up to scare the world in which I crawl.’

“(I) in vain endeavoured to impress him with the indifference to external form, which is the natural result of philosophy, or entreat him to recall the superiority of mental talents to the more attractive attributes that are merely personal.

‘I hear you’, he would reply; ‘but you speak the voice of cold-blooded stoicism, or, at least, of friendly partiality. But look at every book which we have read, those excepted of that abstract philosophy which feels no responsive voice in our natural feelings. Is not personal form, such as at least can be tolerated without horror and disgust, always represented as essential to our ideas of a friend, far more a lover?” (chapter XV)

That is, no matter what theory may tell us, there are sufferings which philosophy cannot heal. What then can heal the pain? According to Scott, it is only virtuous and disinterested action. The Recluse appears as a most curious and formidable figure, one for whom we feel perhaps roughly equal amounts of sympathy and antipathy. But that balancing of admirable qualities with their opposites lasts only until the end: when Sir Edward saves Isabella from a cynical, loveless marriage, we admire him. He has performed some good actions by the way, which he has always explained away as his way of merely teasing human hopes and thus ensuring the inevitable disappointment will be all the stronger. But this last sterling action entirely redeems his misanthropy.

This and associated trains of thought run through the novel, although they are not always apparent on the first reading. In chapter IV, for example, Earnscliff says to the Dwarf: “We are sent here, in one sense, to bear and to suffer; but, in another, to do and to enjoy. The active day has its evening of repose; even patient sufferance has its alleviations, where there is a consolatory sense of duty discharged.” This deep and noble sentiment is clearly Scott’s own.

But the second important, and I think, critical point made by Ratcliffe, another key to the novel is made when he declares to Isabella:

“… it is of his (i.e. the Dwarf’s)  common state of mind that I speak; it is irregular, but not deranged … The courtier who ruins his fortune for the attainment of a title that can do him no good, or power of which he can make no suitable or creditable use, the miser who hoards his useless wealth, and the prodigal who squanders it, are all marked with a certain shade of insanity. To criminals who are guilty of enormities, when the temptation, to a sober mind, bears no proportion to the horror of the act, or the probability of detection and punishment the same observation applies; and ever violent passion, as well as anger, may be termed a short madness.” (Chapter 15).

This observation of the prevalence of insanity in common life-situations, by challenging the rationality of standard behaviour, anticipates the critiques of civilisation made in the 19th century and afterwards. Scott was, in fact, a fairly thorough-going and independent analyst of contemporary life and morals.

In one conversation, as the plot starts to rush to its conclusion, the Recluse is assailing Isabella with his misanthropic philosophy, but she resists him, stoutly: “Misery,” said Isabella firmly, “is superior to fear”. (chapter 16) She means by this that she will run risks to better her condition, even if Sir Edward argues that the idea is futile, because she has hope of vanquishing her misery. Further, although she does not state it, we see that she is too courageous to be cowed by fear.

When Sir Edward has done his work of rescuing her, she falls at his feet (chapter 17). She kneels at the tomb of her mother, whom Sir Edward had once hoped to marry. She takes his hand and bathes it with tears. He is transfixed, gazing upon the monument of the mother and the daughter present before him:

At length, the large drops which gathered on his eye-lashes compelled him to draw his hand across them. “I thought,”’ he said, “that tears and I had done; but we shed them at our birth, and their spring dries not until we are in our graves.”

Humanity can be driven underground, but it cannot be driven out.

The novel is full of delights: the story of the Grey Geese of Mucklestane Moor in chapter II is a concise gem, with the added virtue that it makes the very true point that the Enemy always deceives those foolish enough to trust him. It is told with Scott’s mastery, employing here the understated prose he could wield so accurately, as when he speaks of: “… those praisers of the past who held the comfortable opinion of the gradual degeneracy of mankind.”

Hobbie Elliot, recounting to the Recluse a good many reasons why he should not go abroad as a soldier amiably declares that, if he did go: “my sisters wad sit peengin’ at the ingle-side for want o’ me to ding them about …”, meaning: “my sisters would sit whining at the fire-side without me to beat them about …” (chapter 10).

The portrait of the hypocritical Laird of Ellieslaw, Vere, is drawn with exquisite skill. He is bad, and in that is a fool. But he is not stupid, which means that he is responsible for his sins and errors where a dolt would not be. Thus, he sneers at the worthy and honourable but humble Ratcliffe with these words: “… you are entirely safe from my resentment because you are beneath it.” (chapter 13).

The Dwarf himself shoots some telling barbs. This one, at least, is meant to be of general application to a certain class of person. A rather empty-headed woman asks him to tell her future. He tells her: “… it is a simple one; an endless chase through life after follies not worth catching, and, when caught, successively thrown away – a chase, pursued from the days of tottering infancy to those of old age upon his crutches. Toys and merry-makings in childhood – love and its absurdities in youth – spadille and basto in age, shall succeed each other as objects of pursuit – flowers and butterflies in spring – butterflies and thistle-down in summer – withered leaves in autumn and winter – all pursued, all caught, all flung aside. Stand apart; your fortune is said.” (chapter 5) [For the uninitiated: spadille was a term for the Ace of Spades, and basto for the Ace of Clubs in card games.]

This powerfully and skilfully expressed idea, that ordinary and pleasurable life is an indulgent waste, ties in with Ratcliffe’s two key comments: that philosophy and life seem divided by an iron wall, and that our ordinary lives provide many specimens of irrationality, if not of madness.

It is a deep novel, or rather, it is a novel with depths. But there are flaws. As indicated, the plot turns around “Canny Elshie” (“canny” here means having supernatural knowledge but safe to deal with), also known as “the Black Dwarf”. His name opens and closes the novel, and his dwelling on the moor is the centre of the most of the action. In his eventual revelation as Sir Edward Mauley, he reconciles all the diverse lines of the stories and the fates of the participants. “Cannie Elshie” is actually based on a true life character whom Scott had met, named David Ritchie. But the transformation into Sir Edward is entirely Scott’s fiction. As I have stated, I feel that that is the least successful part of an otherwise most interesting work. This central character is not well integrated. In origin, he was two: one real-life character and one invention of Scott’s imagination. These two were fused together, but the welder’s line is still visible, and we feel that the Dwarf has not revealed a new aspect of his personality so much as he has morphed into a new person.

This undercuts the entire novel, for the real and deep issues which Scott deals with are concentrated around the Recluse himself. Sir Edward was raised a Catholic, and Ratcliffe invokes that faith to help explain his life as a recluse (chapter 15). One day I shall have to collect the materials necessary to show how Scott was fascinated by Catholicism, and how it forms a feature in many of his most interesting characters, often an improving one.

It is another drawback that Earnscliff, who finally weds Isabella, is never really developed into a major character. Perhaps more accurately, although Earnscliff is initially very well and rather engagingly presented (he refuses to take up a blood feud on behalf of his slain father, although urged to do so), he is, in the end, eclipsed by Sir Edward.

Another very interesting and powerful idea is picked up in relation to Isabella, but is not really developed: it comes when her father says to her about her impending and loveless marriage: “.. the sacrifice, to be beneficial, must be voluntary.” (chapter 16)

By the end of the novel, it is possible to have lost sight of Scott’s main points, but, to recap, they are, I suggest, those which Ratcliffe states: that philosophy can be so abstract as to be inapplicable to real life, and that there is really much less rationality, and more madness in life, than we are willing to grant.