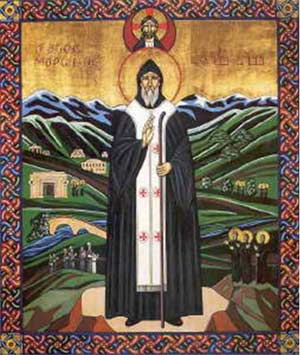 The Philokalia is really a miniature library. The manuscripts which comprise it were originally written in Greek. Although the texts are mostly far older, the present-day collection was compiled by Macarius of Corinth (1731-1805) and Nicodemus of the Holy Mountain (?1748-1809). It was published in Venice in 1782, a choice which I have not been able to understand. The Greek version was translated into Slavonic under the title Dobrotolubiye, by the monk Paissy Velichkovsky (†1794), who had visited Mount Athos. This translation was very important in the Slavonic tradition and the reinvigoration of the monastic tradition and the use of the “Jesus Prayer” which are dated to the beginning of the nineteenth century (thus showing how individual efforts can be, no matter how unpromising they first seem). Later, the Philokalia was translated into Russian by Bishop Theophan the Recluse (†1894), another important figure in the tradition.

The 1951 volume was the first large selection published in English. Prepared, edited, translated, and commented upon by Evgeniia Kadloubovsky and G.E.H. Palmer, it was taken from the Russian text, and concentrated on the theme of the “Prayer of the Heart.” The four volume edition in English, however, is translated from the Greek, and was commenced by Palmer with Philip Sherrard and Kallistos Ware. There should be a fifth volume if it is to be complete. When volume 4 was published in 1995, it bore a note promising a fifth and final volume, but so far, it has not appeared.

In 1954, appeared Early Fathers from the Philokalia, a sequel to the 1951 volume, again by Kadloubovsky and Palmer. This included materials from St Isaac the Syrian, one of the most important writers of the entire Christian mystic tradition. Those were the only two volumes produced by that formidable team, who also in that same year (1954), saw the publication of Unseen Warfare as edited by Nicodemus of the Holy Mountain and revised by Theophan the Recluse. The rate at which these two worked was quite remarkable. When we consider how slowly the later texts appeared when Kadloubovsky was no longer on the team, I am not sure whether it is a testament to her efficiency and ability, or to the more rigorous nature of later editions, or a bit of both. This is based upon a work by Fr Lorenzo Scupoli, an Italian writer (c.530-1610), for whom I have tried to find information. Some details are known, e.g. that he was a Theatine, but little else. Nothing I can find in the Theatine tradition prepares us for the extraordinary insight in his little volume Il combattimento spiritual (1589). That it was taken up by Orthodox mystics is in itself quite interesting. Kadloubovksy and Palmer also translated The Art of Prayer, an anthology of texts which had been complied by Igumen Chariton. It was edited by Ware and published in 1966. I have not yet been able to examine that volume.

The first volume of the Greek translation of the Philokalia appeared in 1979, and as stated, the fourth volume was published in 1995, and a fifth was promised. However, the Greek translation was treated as if it were a new enterprise altogether. The first volume appeared bearing a dedication to Fr Nikon (†1963), a hermit of Mount Athos. It states that “without his inspiration this work would not have been undertaken.” This rather elides the memory of the earlier selections from the Russian. But apart from the fact that all are published by Faber & Faber, there is an evident continuity between the Russian translation and the Greek. Palmer was the runner who passed the baton from Gurdjieff’s esoteric current to the Orthodox tradition.

Evgenia Kadloubovsky was Ouspensky’s personal secretary, and it is not a bad guess that it was she who arranged the English translations which Ouspensky employed in his groups. Ouspensky adapted the techniques found in the books which comprise the Philokalia, rather than following them slavishly (e.g. instead of the short Jesus Prayer, he used longer prayers such as the “Our Father,” and he advised his students to try and remember themselves as they prayed, and to learn the prayers in different languages.) Of course, his idea of prayer was taken from Gurdjieff, rather than from the Orthodox tradition. Mr Adie had typescript notes from the Philokalia. I am guessing that they came from his Ouspensky days, but perhaps some of the Gurdjieff groups used them, too.

Gerald Eustace Howell Palmer (1904-1984), a one time pupil of P.D. Ouspensky, was the Conservative MP for Winchester from 1935 to 1945. He lost his seat at the 1945 election, and in 1948 visited Mount Athos, where he met Fr Nikon a hermit. Given that he travelled in 1948, the year after Ouspensky’s death, it would not surprise me if he had been one of the “refuseniks” who had rejected Mme Ouspensky’s advice to go to Gurdjieff in Paris. (My source for Palmer’s having been a pupil of Ouspensky is the Wikipedia article on Robin Amis. However, I had been pretty sure that it must have been so, for otherwise it hard to see how he would have been working with Kadloubovsky and how they could have published so much so quickly.)

Palmer achieved a direct connection with Mount Athos, where he continued to travel each year, while maintaining a distinguished career in England. Fr Nikon became his teacher (starets), and he translated other works from the Orthodox tradition. And so, after Ouspensky’s death, the group he had founded started to split and move into different pre-existing traditions. The Gurdjieff current has always had an uneasy relationship with other traditions, note, for example, how many of Gurdjieff’s own followers made their way to Buddhism, especially Zen and Tibetan Buddhism.

Having said all that, we should not how the volumes published by Kadloubovsky and Palmer champion the Orthodox tradition (a tradition which Mme Blavatsky, too, preferred to the Western). Thus, at the end of their very lengthy introduction to Unseen Warfare, they write:

Perpetual prayer – the abiding sense of God’s presence in the soul – spiritual warmth of heart; these are the recurring themes in Theophan’s revision of this book. Their introduction restores the balance of the traditional Christian teaching, which in Scupoli as in other modern Latin authors had become disturbed. It makes Unseen Warfare a genuinely Orthodox work, a worthy companion to the Philokalia, with which, both in Greece and in Russia, it has shared the same editors.

That is an introduction to this area. In future articles, I shall consider some of these texts in a little more detail.