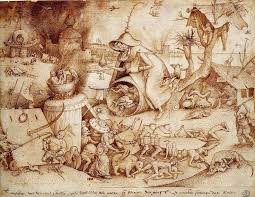 This is from the meeting of Tuesday 24 June 1986. When Mr Adie told the joke about the political rally in the north of England, people laughed uproariously. I have not made any attempt to reproduce the accent he adopted. But he did accents very well.

A woman said that she becomes judgmental when people swear in front of her. A friend did so recently, and she told him that it was offensive. “Yet when I thought about it,” she said: “it is really just my subjective reality, and nothing to do with conscience.”

“Maybe in yourself there is some conscience beneath it,” said Mr Adie, “but perhaps formatory centre is manifesting first. It is a very interesting example. You have a feeling that it is wrong. You may be quite correct in that. Why should a person swear? Of what value is it? Of course, it does not mean to him what it means to you. It could just be his language nd his education. But then that has some significance, and even if it is merely something formatory and mechanical coming out of his mouth, yet your response may be from emotional centre. Swearing is offensive, when it is mechanical, when it is insensitive and even insolent. It is often aimed at a sort of domination.”

“When it occurs, come to yourself. If you are present to your emotion, you could smile at him and say: “I am terribly fond of you, but is this all necessary?” You could try that. I doubt that he would spit at you.

“No, but neither did he agree with you,” replied Mr Adie. “The question is your state and the relations established between you, so you have to be careful about the terms on which you allow the relationship to be established. When two men meet each other, they might say: “Hello, you old bastard, I haven’t seen you for years.” Is that offensive? It depends upon how it is said.”

“There is a story from the north of England about how a fellow could not understand a politician at an election meeting, who kept repeating, ad nauseam, “one man, one vote.” When the rally was over, and this chap and his friend are walking away, he turns to his friend and asks: “What did he mean: one man, one vote?”

His friend said: “It means ‘one ruddy man, one ruddy vote’.”

And the fellow says: “Well, why the ruddy hell didn’t he say so in the first place?”

“But swearing can be very offensive. During the war, when there were young men together, soldiers, they would get into a low way, and sometimes work themselves into a terrible state, and then the swearing was quite filthy, quite disgusting.”

“So it can be harmful?” the woman asked.

“Anything can become harmful, and everything can be helpful. It depends on what you are and how you are. It is silly to get into a knot because someone uses that language, and it is also silly for you to try and correct him in that way. It gives you a chance to find a new way, without blindly reacting.”

“It shows how much we need to understand about language, and our being when we use it. My state and my language are mutually effecting. If my words come from under the influence of formatory centre alone, they cannot have any life. They can cause upsets, and even disturb me. But if I have been studying my own speech, I will understand his more readily, I will feel myself in relation to him as he speaks, and that will show me how to respond.”