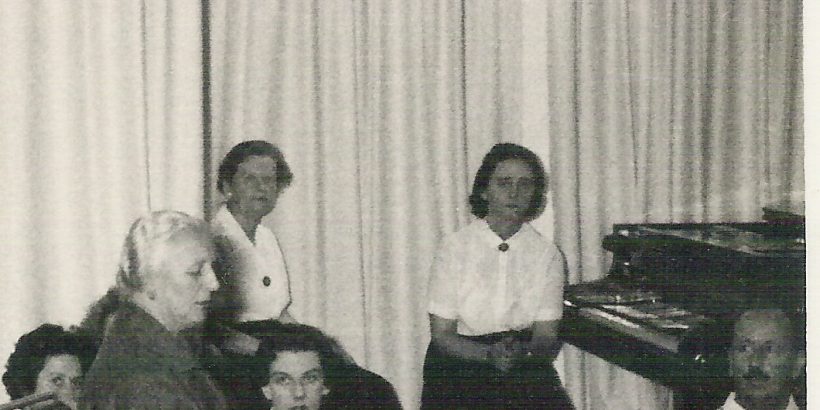 Mrs Helen Adie was known for the great simplicity and clarity of her directions and answers. When taking a group, she just did not speak unless it was true, although sometimes her insight came out in an almost poetic way. For example, in this extract, she speaks of feeling the centre of our sensation. This continues the meeting of Thursday 5 July 1979. It opened with a question from “Jenny,” who asked how she could clear her head of thoughts, to “stop the turning motor,” as she put it.

“They don’t completely stop,” said Mrs Adie, “they go on. They go on. You may even hear them muttering in the background, but your attention is not on them. Rather, you make a definite sort of stop for one moment, and put some attention on your sensation. You don’t try to find the sensation, it’s there, it’s always there. The sensation never stops but you’re not aware of it. So, if you have the intention, then the moment you manage to free yourself from words, you can be full of sensation.”

“But I don’t seek sensation for its own sake. You feel the centre of it, you feel your presence, and you come out from the lowest part of your head into a different part of your head. The higher part of the head may not have thoughts, but it has thought, and it has something higher than words. Higher thought has degrees: some of it is much higher, but some is only a little higher.”

Jenny said that her problem was that she goes over her thoughts again and again, and there is never any difference.

“And for you, because you are a great dreamer, for you that’s a very important thing,” said Mrs Adie. “That sort of thought is completely automatic, and usually we are completely in its power. That is, until the moment comes that you want to be free of it. At first it is a  little bit for a little while. And real thought is quite possible.”

The next question came from “Christine”. She volunteered that she found it helped her stop thoughts if she imagines a white sheet. Then, if she is finding herself caught, she glances at her fingers, and senses one. She concluded that after using one of these two exercises: “I feel quite strong for some time. Nothing can get through for some time. Then I forget. I find I can respond to that very quickly. Instantly.”

“As long as you can respond to an intention, there is a power of choice, so long as you don’t delude yourself,” said Mrs Adie. “You have to be careful. Those tasks can facilitate a certain amount of control. The test is always whether it brings me to some presence, to collect myself. If there is some presence, so you’re not immediately dragged out. If that works then continue working like that.”

The next question was from Sam. He said: “I have been trying to accept the way that people act, or to accept their opinions of things. On one particular day I decided when I got home whatever my wife wanted to do that evening I would do, like, if she wanted to clean up, I would clean up, when she wanted to watch television I would watch television. It all seemed quite easy, but then the main problem was I couldn’t convince my head that it was worthwhile doing this exercise.”

“Your wife didn’t wonder if you were ill or something?” asked Mrs Adie.

Sam did not directly answer, but told a story of when his wife wanted to speak with him, but he resisted, feeling: “I’ve been working all day, I’m tired, and I’ve got a right to read this paper. Also, when I tried it at work, intending to try and accept anyone’s suggestion for doing a job, I rejected their ideas, saying to myself that the way I was doing it was much better.”

“It’s a very good effort that you have made,” responded Mrs Adie. “A very good effort. But nothing can go on indefinitely. And the formatory part of the head isn’t in sympathy with this effort of yours. It doesn’t understand such an intention, and will always try and talk you into going back to what it is familiar with.”

“But with such efforts it is necessary to be completely relaxed during the time of the effort. Tension will stop me. When people try to not express their negative emotions they repress them, which is expressing them in another way.”

“How much you really managed to accept is the question. You probably would not make a plan to accept every suggestion if you knew what it means to accept. What if a completely foolish suggestion was made?”

“And if  I am going to accept, then I cannot go on continually patting myself on the back, or giving myself reasons why I shouldn’t have to put up with it.”

“Besides, the aim is not really to use every suggestion everyone will make: it is to see what is going on in your head. It’s your head that you have to look out for. I have a great number of

opportunities for that all through life. I can see that there is always something I have to accept from life. So if someone makes a thoughtless suggestion, I accept the fact that they made it, and I don’t react to that. If I don’t react, I might be able to see what goes on inside me. And that may free up the higher part of my head, so that I can accept it or not, with some impartiality.”

“It would be very profitable to try to accept as a fact all the clashes of personality. Everybody is sunk in their own little lives. That is their interest. They are really quite unaware of nobody else. It’s a very good thing to patiently, quietly let it impact you, and then struggle with it, whether you disagree with it or accept it, but being really relaxed with it, and no turning around in the head. You can’t expel it from your head, but you try not to pay attention to it, not to be taken in by it. It’s your ego.”

“Recognise it for what it is: yours only. But don’t give the effort up. Maybe give yourself a time limit, because you can’t expect to be able to make an sustained effort for hours. But maybe for a certain time you could do something that you want to do.”

“With the situation at home, it might not be quite right every evening always to stifle your own inclinations that way. It wouldn’t be good for the other person either. You have to be intelligent about it. You want to see what your limitations are, and then go beyond. But if you’ve been sort of controlling of yourself for a long time, then when you do let go, there’s a hell of an explosion, sometimes.”

“Continue. There comes a time when the “if’s” aren’t there anymore. There’s a lot to understand about it. You don’t want that explosion to happen, otherwise you lose everything you gained. Don’t perhaps set yourself too hard a task at first. Then build up. Perhaps the second time it will be a little harder. That method is very, very good for everybody.”