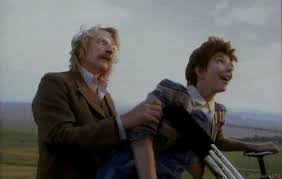 This is a strange, moving song: the music is powerful, but the song as a whole does not share in the power, at least not as it should. I think that part of the reason lies in the failure to fully harmonise the music with lyrics; and part in the obscurity of the lyrics. Taking the lyrics and the music together, there is a sense of dislocation, as if they don’t quite fit. Still, the music does pack a punch: I was drawn to reconsider the song after hearing the climactic rendition of it at the end of the 2016 set, Before the Dawn. Of course the audience were enthusiastically responding to the entire show, but “Cloudbusting” was a fitting end to that show. Were it not, the people would hardly have thundered out that cataract of applause. The song is worth noting because it illustrates a problem with modern art: tremendous work goes into details, but the major issue, the fit of the words and music to make a harmonious whole, is often compromised. It is a tremendously original song: in fact, it is so original that it is obscure. It is a shame, because I think that the real theme is a significant one to all of us: it seems to me to be about how memories of childhood, and the obsessions of childhood, form us, and mould us, distorting our perception of reality, and filling us with emotional fantasies which endure into, and so nobble, our adult lives.

The song was first released in 1985, on The Hounds of Love. The lyrics are: I still dream of Orgonon. I wake up crying. You’re making rain, and you’re just in reach, when you and sleep escape me. You’re like my yo-yo that glowed in the dark: what made it special made it dangerous; so I bury it, and forget.

But every time it rains, you’re here in my head, like the sun coming out. Ooh, I just know that something good is gonna happen. I don’t know when, but just saying it could even make it happen.

On top of the world, looking over the edge, you could see them coming. You looked too small, in their big black car, to be a threat to the men in power. I hid my yo-yo in the garden. I can’t hide you from the government. Oh, God, Daddy. I won’t forget. ‘Cos every time it rains … (chorus) Yay, yay, yay, yo! Yay, yay, yay, yo! The sun’s coming out – your son’s coming out.

The part of the lyrics which comes to stand out on repeated listenings is the line: “I just know that something good is gonna happen. I don’t know when, but just saying it could even make it happen.” Here, the music and the lyrics are a perfect fit. Note that these words are by far the most accessible in the entire song. I had heard of Reich and Organon, and I knew what was meant by “cloudbusting”, but I tend to think that I must have been, as I still am, in a minority. By the way, the reproduced words omit the cascading vocals at the end – a repeated “Yay Yay Yay Yo”. It is only now that I realise it could be a play on “yo-yo”. I hope not.

What does it all mean, and why is there  a marching quality in the music which is not found in the lyrics? The answers are found in the book which inspired this piece: Peter Reich’s 1973 volume A Book of Dreams. That book is made up of autobiographical musings, rather than being anything so straightforward as an account of his childhood. Born in 1944, to Else Ollendorff and the psychiatrist Wilhelm Reich, he spent some of his childhood on “Organon”, the property Reich purchased in Maine. The name comes from “orgone”, a word Reich coined to refer to what he believed to be the “life energy” (page 4). There can be little doubt that Reich was both highly intelligent, observant and mad. His madness consisted largely, in my view, in an arrogance so extreme it caused him to despise other people, belittle them, and – to his ultimate peril – ignore them as being midgets to his self-perceived Titan.

I won’t go into Reich’s theories, they are discussed in many on-line sites. But this particular story centres around his “invention” of a machine which could destroy the bad energy in the atmosphere, and incidentally, cause it to rain. That is what “cloudbusting” is: manipulating orgone energy to cause rain. Peter Reich had had a “bright green glow-in-the-dark yoyo” which he buried because, as his father believed: “Glow-in-the-dark light was bad energy, and it didn’t mix with Orgone Energy, which was good energy. Daddy was trying to kill the bad energy in the atmosphere. Bad energy came from flying saucers and bombs” (12-13). (Neither had he been allowed to keep a glow-in-the-dark ring). I could not find that line about “I know that something good is going to happen”, in the book; but at one point there is the questions and answer: “What is going to happen?” “I don’t know. I just don’t know what will happen” (100). Also, the book closes with a friend of offering Peter tobacco and saying: “Try it. It’s good” (172). Perhaps Kate Bush was trying to capture the positive note of which it closes.

This song, then, is sung from the perspective of the adult son of Wilhelm. He still dreams of the Organon property in Maine, USA. In his sleep, he sees his father close to him, cloudbusting, but elusive. His yo-yo was dangerous because the phosphorescent material was, as mentioned, considered by his father to be dangerous. Bush uses the yo-yo as a symbol for Reich. This is quite acute, because throughout the book there is a double theme: Peter loves, almost worships his father, but he is aware that his father and his father’s theories seem weird to other people, and so he has to maintain a discrete silence: this is partly a result of his father’s own injunctions to say nothing, and partly his own realisation.

Sadly, rain has now become a cue: when he sees rain his father enters his head. As we shall see in the quote below, it is not just a case of recalling his father, Peter feels that their minds are somehow united. In other words, his own individuality is compromised. The reference to the sun coming out, is later picked up when she sings “your son’s coming out”. The sun/son word play symbolises the desire of the Reichs to triumph over their persecutors in the FD&A, and Peter’s identification with that dream.  The FDA is the USA Food & Drug Administration. The FD&A had Reich arrested for unlawfully peddling techniques as cancer cures. While in prison, he died.

The next verse refers to how the Reichs were on the alert for the coming of the authorities, and the overkill of the agents who eventually do arrive, arresting Reich, and taking him, never to return. It is also interesting because the theme of being up high and gazing down: an image which is also found in “Hello, Earth” from that album: to my mind, the strongest song on that album, and one of the greatest of the twentieth century.

This is what I mean by the obscurity of the song – who could possibly know about all that unless they researched it? In itself, that is not bad, but it is not realistic to expect people to. This means that most people can never really understand the song. Lennon always liked simple songs. He apparently told Joni Mitchell that her complex output was “a product of ever-education”. Exactly.

But now for the crazy goose-stepping of the string arrangement and the drums. The manic military tone of the music is, I think, a sign that Bush was trying to reflect something in the book which she did not get into her lyrics: that Wilhelm Reich saw his work as a battle against cosmic forces, and formed an “army” to fight the good side. He made his son Peter a sergeant in the Cosmic Engineers, with a whistle and a Sam Browne belt (the military belt supported by a strap over the right shoulder). (5) He was later raised to lieutenant (28). The unhinged tone of the militarism in the music reflects this kind of comment in the book: “I closed my eyes and my mind was joined with Daddy’s and Beethoven’s, and we were all seeing the same thing: a great plain with bold white clouds climbing the sky like mighty stallions, and coming through the clouds on beams of sunlight was the Army of Cosmic Engineers marching straight, forward, and proud beneath tall flags snapping in the wind, marching proudly in smart blue uniforms with hats with shiny brims … First Daddy – the General – and then Bill and Eva and me … and we would march to victory over the EAs and the FDA”(28-29). The EAs are flying saucers.

So I think that the song is almost a triumph, but not quite. Ultimately, it is too odd, too obscure. “Wuthering Heights” was supernatural, but it was not obscure. One can write with mystery: I would say that the Beatles’ “A Day in the Life” is something of a mystery. But what “Cloudbusting” lacks is clarity and integration between music and lyrics. Another clear example of such a mismatch is Bowie’s “Life on Mars”. As one friend said to me, “the music is one corner of the room, and the lyrics are in another, and between them is a gap”. Art. It cannot satisfactorily be produced by the mind alone or the heart alone, or even the two of them working in tag-team. They must be harmonised and co-operate. But for those who look, this song is a very powerful reminder of the influence of childhood, and of how it is necessary to “repair the past” (as I have mentioned in many posts), to have a healthy and sane adult life.