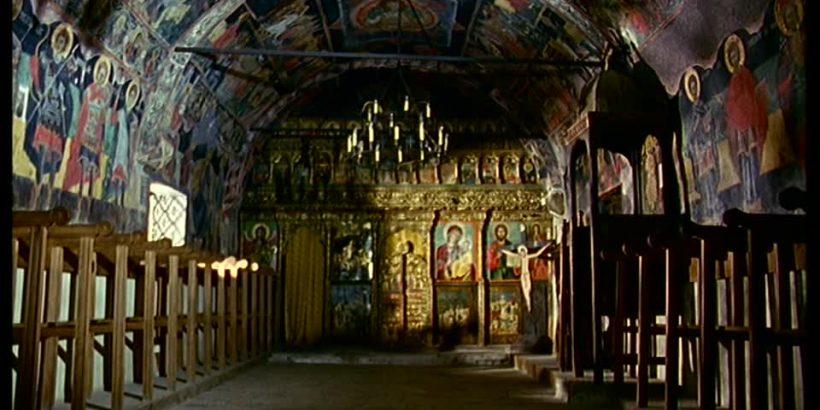 This is from the weekend work of Saturday 12 November 1988. Dennis, the person responsible for it, failed to record the morning address  that day. The first exchange was a short one. Someone said that she blamed Dennis for not turning the recorder on. Mr Adie replied that she had experienced her negative emotions as heaviness. He continued: “It is something dull and black. That is how we live, not realising it. Whether it’s a big thing, or a little thing, it’s equally bad. I can become negative about anything, big or little. It’s the same sleep, and I am the same slave. I have to go on seeing it until I understand it.” The comment was but brief, yet it has wide application: from the perspective of sleep and awakening, even a small matter can be significant for us because it means that I am a slave. I feel that it is equally important to add that this does not justify our becoming disproportionately upset with others on the basis that even a small matter is as significant as a large one. Our reactions and responses to other people should still be fair and proportionate.

The next question was from Jill, who said that Mr Adie’s remarks on Wednesday night about finding the right attitude was very helpful, as she often comes here with a lot of complaint about the inconvenience to her ordinary life.

“You have been freer to notice it,” said Mr Adie: “to know that there is some reality about what you are seeing. What a relief. There is so much to see, to learn and understand.” Again, the lesson is not to be discouraged but relieved at seeing reality, no matter how painful.

Jill continued: “I also had an impression, when I was coming here, of myself as a child, and the purity of that, and the hardness and the rubbish that I had accumulated since then, and …”

“Yes. I need to go back,” responded Mr Adie. “I need to count my treasures. This is what the preparation has given us, the reception of finer material. Not only that, but we do have finer material. We are not only coarser material, we are also finer. And then we have to look for it, and it is a question of stopping the automatic thought, getting away from it. And then, if we make that effort, other thoughts will begin to emerge.”

“See, I have an animal in my body, and when I am not thinking, I am really an animal. But an educated animal, that is to say, I am one of Pavlov’s dogs, who knows how to drive a car, the rules of the road, and that there is a difference between having a credit or a debit balance at the bank. But unless there is a connection, unless I have my head going, and see the body, what is there? But if the head is awake, and I am present to my body then between the two, the connection of feeling can appear. Then I am in a different position. Then I am beginning to see things as they are, and not in this extraordinary, distorted fashion, where I look at everything through broken-up, damaged glasses.”

“And that is my life. Something in me has been poisoned. The glasses through which I look at the world have been tinted with some individual colour, and I can’t consider life without that tinge. But I could by flashes see things clearly, without that colouring, and I could recognise a harmony in the laws of the creation.”

The essence of this answer, then, is that we do not see reality steadily and continually, but the sort of observation Jill had made was a glimpse. It can be expanded and developed if the mind is used to observe the body. This allows the feeling to appear, and then, in a more balanced state, I can recognise “a harmony in the laws of the creation.” This surely means that I cannot recognise the harmony in the principles of the world until such time as I have achieved some harmony within myself. It is perhaps a little like trying to study the stars while in a storm-tossed boat. Bring the boat in to land and have a stable foundation, then the stars won’t swim before your eyes: when I am steady, I can see steadily.

I skip over the next exchange, but the fourth was a question from Heidi. She said: “I came feeling really fed up with myself, and being excited, and dashing about. We only had two to prepare the breakfast, not three; but for the first time I didn’t get angry or rush. It left a trace through the first part of the morning.”

“It seems to me to be a picture of being normal,” replied Mr Adie: “a picture of someone free of negative imagination. That is normal but it is not usual, in fact it is very unusual,but very few people are free of it. This morning you felt simple and free.”

“This also means that there is thought of a certain higher level, but I still want to be careful with my formulations. From one perspective, your normality is how it usually takes place. But I need to change my normality, to add to it.” What Mr Adie means is that a normal man is one who lives in accordance with a rule.

Skeat tells us that the word “normal” means “according to a rule.” It comes from the Latin word normalis, which means “made according to a carpenter’s square”, the carpenter’s square being a norma in Latin, and hence a rule or a pattern. I won’t set it all out here, but he goes on to trace that back to the same root as our word “to know.” Incidentally, the “norm” in “normal” is the same as that in “enormous”, or larger than the rule. The relationship between knowledge and a true pattern needs no elaboration from me.

But this is the significant thing for us: from the spiritual perspective, to be normal is to have a possibility of becoming a true man, a man who is developing his inherent possibilities for consciousness, conscience and holiness (the quality of God). Or, what comes down to the same thing, to be a man with the Law of Three in himself, who knows how to uses the laws of creation by brining the active, the passive or the neutralising force as requisite to realise my aim. (I think that this explains the many references to “normal” and “abnormal” in All and Everything, and why Moses should be described as “normality-living”: he is traditionally said to have given Judaism its Law, governing all aspects of life.)

“To be present is very rare. You have to face this fact; but if you do, you may have flashes and even traces of presence. This is something for thought, I mean, how can you come to be on a higher level? How to take part in life? Because I need presence in order to partake in it. And then you need to be very careful, because when you start to think, and to try and use a word like “normal”, when what you seek is not normal for you, you will miss it.”

“Words are very important. They can have a magical effect. Thought turns around, you see. Supposing you have a negative thought, and it affects your feeling, but then you manage to pay a little attention, and not give way to everything at the first impulse. Like that, you can wait until some other higher, finer indication comes to you. You have no other chance. You don’t even know exactly what you need. But you know you need something, and that already is a great deal”.

“And what about the one I am working with? There are only two of us, but I am identified with myself. You omitted to take into account the externals, you see? But that would be a wonderful change – you might turn around and see him as if for the first time. What you are saying is important and good, it is only on this next step that I am talking about, that you do not lose what you have.”