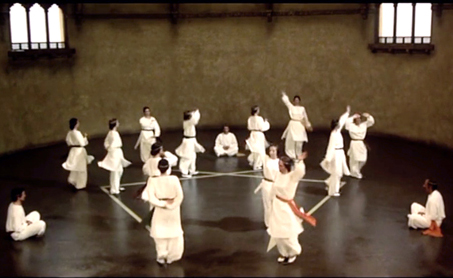 Conscious of the approach of the 29th, this is the first selection from a meeting of  Thursday 5 March 1987 with Mr Adie. The first question came from Denis who said that he had made his efforts, that week, while walking, and breathing. He had been reaching for something, so to speak, but was not sure of what, and had lost the sense of his effort.

“I do depend, at that moment, on my work,” said Mr Adie. “That is the serious fact. I depend on my past work. What have I got to help me? Why am I unable to come to some more understanding at that moment, in that condition? What is blanketing me?”

“I haven’t really realised that I lack presence, that I am trying to work with one centre, with my head, or only with my sensation. My being presence, my connection with the motion of the body, and the levels, and many things. All is needed.”

“See, if something touches me, maybe things could flood in, but if they are going to do that, then a gate has to be open. So what is closing the gate? What makes me stand still, like when I was talking to you, Agnes? Suddenly there is a blockage. What is standing in the way? Something stands in the way, so that by hook or by crook, what is vital is the movement, to experience the movement that is taking place.”

“Agnes” was a lady with some health and other problems. She was, as Mr Adie would say, “rather a poor thing.” He was very kind to her, often giving her little attentions.

He continued: “Energies are moving, flowing. If I could realise a number of facts like that, more would come in, I could see more connections. But I am stuck with a sort of head thought: “What do I do now?” Whereas the demand upon me is that I come to my presence quickly.”

And in my preparation, what do I take away from that of an increased understanding? I know that I am going to immediately lose something of the state I came to in the preparation, because I have to return back to life. But what is it in the preparation that I could have the influence of? When I have a better state, this is incredibly valuable: I need to not let that go just like that. I cannot force it to remain, but I can remember it, and maybe it can come more.”

“It won’t come by forcing. It will come by receiving gifts. All impressions are gifts. Creation is a gift. None of us could have made the creation, not even a hair, not one single hair, and yet there is a whole creation available to us.”

“So am I in the position of a receiver? And what do I receive? What can I receive while some rat is running around in my head, saying: “This is wrong, and that is wrong, and someone is doing this”. In a way, I live a filthy sort of life. I have a barn, and some sort of animal is in the loft running around, complaining and accusing, protecting itself, lying. I am sorry if it’s a bad picture, but it’s true. Who thinks that is overdrawn? But if I am not there, what does it matter? It is only my presence which will gradually restore order, clean things, and allow the forces to flow according to a different order of law”.

He now turned to Agnes and said: “Stop there! Just be quiet and take it in! You’re quite fortunate.”

“Good,” he said softly. “Don’t make me suffer.” It is odd to recall it now, but these small and often unexpected exchanges with him showed us that he was not only alert, he was alert for us.

The next question was from Les. “What you have said touches a problem I have had and haven’t known how to deal with.”

“The marvellous part is that we have the key in us,” said Mr Adie, “but we don’t know where it is. But we have it, and it has brought us here. So where the hell is this key? There is a key, but we’re so geared up to external life, and all the misconceptions of what it is and how to go, we’re utterly incapable for a very long time of just receiving, and forces flowing through, and discriminating between this and that. This is what we’re trying to get at – to have that extraordinary element as well as this life with all its roughnesses and contradictions which in fact we project onto it. But when we have that state it is all seen as according to law. And then we have another life for a second, for a flash.”

“I seek to find the right balance, the right degree of relaxation, the right firmness, the right tensions – because I can’t just let myself go all sloppy. I said last night, there’s even tension in liquid, surface tension. But if I had no tension I would sink down into a liquescent juice or something. There has to be a tension. The body has to have a proper tension, and a proper force for the feeling, and a proper order for the mind. The mind is superior: it wants order. The speed is unimaginably quick in the higher mind.”

“If we are out for anything less than the miraculous, well, it is not the Work. Take the mind of Ouspensky. One of the greatest minds of the previous century. He packed up and went around looking for a master. And then started to learn. I only cite that: the enormous gap between ordinary mind and this higher knowledge. He had this great capacity to realise that all his own knowledge was not enough.”