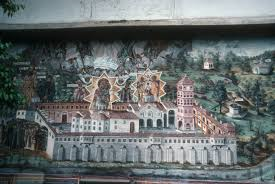 This was the first question from the evening of Thursday 29 August 1985. I have set it out in full with no editing whatsoever. It is not so much what Mr Adie said about fear, useful as it is, but the being-logical-confrontation he helped someone to realise. It was masterful.

Ralph said that he had been very confused in his work for some time: he cannot reconcile his observations with Mr Adie’s comments. He said that he was full of fear and Mr Adie had said he didn’t think it was fear.

“What have you decided now?” Mr Adie asked.

There was a pause, then Mr Adie added: “It’s simple.”

“Find a teacher. How long has this been going on for? A year?”

Again, there is a short silence on the recording. Then Mr Adie spoke again: “But now, if you find yourself not understanding, bring the point. What is it? A general statement of misunderstanding is not sufficient. We now have to pass on to something definite which you have really thought about. What for example?”

“Well, I can take the example of fear.”

“Yes, but you’re going to speak of a special case you can remember? Otherwise, you see, it’s your conclusions.”

After a short pause, Mr Adie stated, as if in an aside: “Everything is contradiction. You just spoke at the weekend work.”

“Alright. What does it matter?” Mr Adie asked.

“I felt then that I was particularly overcome by fear.”

Apparently Ralph didn’t respond, because, after a pause, Mr Adie spoke again: “What has to give way or bend? Nothing real in us – only what’s false. So what was false? The whole of our work in the group is to support the real, to find out the real, to illuminate it if we can, and the fear must be the fear of the automatic, involuntary processes inside us.”

“So from that, what? This is interesting: what is the obstacle?

“I think I’ve seen parts of it but I am not sure I’ve seen all of it.”

“Alright. You say you think you have seen parts but not all. Of course you haven’t seen all: you’ve only just started to see it. Be very critical of how you speak. Much more critical. There is no question of seeing it all for any of us. I am rather sorry to have to be like this, but if you go into a sort of easy thought, you will never get anywhere. You have got to be demanding. Not ordinary sloppy thought.”

Mr Adie continued: “You see, when I am not there, and I am only there seconds, really, the old I’s parade. And they will pass anything to justify their position. They will accept any rubbish, any lie, it doesn’t matter, so long as they are supported.”

“Then, moment by moment we have a chance of being here, free. And then they will come again. Obviously real I can have no fear, and the representative, also, is relatively fearless. But now where does that leave you in regard to your question?”

After more silence, Mr Adie asked: “Do you agree with that?”

“Well then you’ve got something! But the indication is that you have to look again, but with more presence. You have to have some impartiality: that’s the difficult thing.”

“If you feel negativeness in yourself, upset, whatever the sequence of thought, whatever the conclusion, whether it is positive or negative or whatever it is, if there is negative emotion about, it’s going to boss-eyed. So I search for this impartial situation, which is one of strength, of course. Freedom.”

“Good. So we’ve got another hour, nearly.”

I think the key point here, taking what was said, was that real I has no fear – our internal fears are related to purely automatic processes. I have found that most fear can only take place when the formatory mind is active. When I try and rise to higher parts of the mind, the fears just have no traction. It is as if they vanish.

An interesting aspect of this exchange is that Ralph never says what he has seen. He offers that he has only seen some of it, but he does not volunteer anything about that. He was, apparently, not ready to open that up. I tend to think that some of his fears must have related just to that: to being open. But behind even that, Mr Adie had told Ralph that what he had earlier seen might not have been fear. This suggests that he was not open to the possibility that he had any weakness other than fear. And that must be telling.