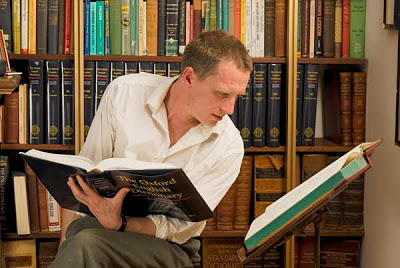 I am reading Robert Hugh Benson’s early novel By What Authority?  One of RBH’s strong suits as a novelist is his graceful employment of an extraordinarily wide vocabulary: his use of abstruse words is never forced. His prose very rarely does not seem natural, even if his narratives are sometimes reminiscent of Chesterton in their strained artificiality.

Given the nature of reality, that there are higher planes and lower planes, mixing is essential if the higher is to be received by the lower: there must be some form of blending. Gurdjieff says a great deal about this, but for now I am dealing with this word .

The Shorter Oxford Dictionary of 1973, which is the third revised edition with revised etymologies and addenda, has this: “1. To mix, mingle; to combine, blend, intersperse.” There follow several obsolete meanings, among which is a reflexive use (“5. To busy oneself”) and an intransitive use (6. To concern oneself, to take part in.) Finally there is a note: “Now always to busy oneself or take part interferingly.” (p.1299)

The 7thedition of the Macquarie Dictionary has simply: “to concern or busy oneself with or in something without warrant or necessity; interfere [ME medle(n) from OF meddler from L(atin) miscēre mix]” (933). It also has the interesting word “meddlesome” meaning “given to meddling.”

Skeat has this pithy definition: “To meddle with is to mix with.” He notes that the Middle English verb medlen is just “to mix.” The original Old French form was apparently mesler, while he sees the d as an intrusion (361).

Clearly enough, the meaning in Skeat was the original one: to mix. But it came to mean to mix oneself in an activity which is not one’s concern. That is, it is now an example of what Gurdjieff called “identification”, that quality of losing myself in thoughts, emotions, dreams and bustle.

Now for the philological question: Barnhardt, writing the Chambers Dictionary of Etymology, speculates that there was a Vulgar Latin word *misculare derived from the Latin word miscere to mix, and that this gave rise to a French word which was probably *mesdler. As three consecutive consonants are often simplified, this became mesler in some parts of France, and medler in others. It is interesting to reflect how rich English has become through this process: from the Latin miscere we have the word mix, and others with derived meanings such as miscellaneous. We also have the word meddle and its derivations, such as meddler (a person who meddles) and the adjective “meddlesome”.

Meddling was also Beelzebub’s great fault: “… owing the as yet unformed reason due to his youth, and owing to his callow and therefore still fiery mentation with unequally flowing associations, that is, owing to a mentation based as is natural to beings who have not yet become fully responsible on a narrow understanding, Beelzebub saw in the government of the World something which seemed to him “illogical,” and having found support among comrades, beings like himself not yet formed, interfered in what was none of his business.” (Beelzebub’s Tales,1931 Manuscript, 41).

The German edition has “mischte er sich”, or “he mixed himself”, of course with the nuance of he interfered. Likewise, the French has “il se mêla”, using the root which gave birth to our delightful English word. But one’s psychological understanding of the process is deepened by understanding that such interference is precisely a mixing of oneself, a dilution of our being, a going out from oneself to be lost in exteriors.

One of the pleasant by-products of this type of research is awakening to the beauty of some of these words. “Meddle” is almost artistically perfect for what it means. When I speak of “awakening,” please understand that it is often a re-awakening. One of the results of inner work is that we remember small things from the past which had not been forgotten but had lain unremembered in the corners of our memory. Often now, I recall something of the sensation I had when coming across new words. Just the other day, when someone was translating the Lebanese sadarna as “we exported”, I suddenly recalled being in primary school and coming across this word, discovering its meaning, and wondering at how grown up it sounded. I remember that even then, as a boy, thinking that anyone who used this word would have to have related concepts: of a country, of production, of preparing those products to be sent via ports to other countries, and a picture of wharves and ships holds came to my mind.

That is, the learning of words can awaken the mind, because they are, after all, instruments for dealing with concepts. To revisit and study them can reawaken parts of the mind higher than the purely formatory (hence my reference to the delight I take in words such as “meddle”); such activity touches emotional part of the intellect.

Part of our waking-sleep is that we come to believe in the concepts as if they were independent realities; in other we identify with them; and in yet other words, we meddle with them.

There is much in Gurdjieff’s short description of Beelzebub and his “callow” state. A future blog shall examine that passage.