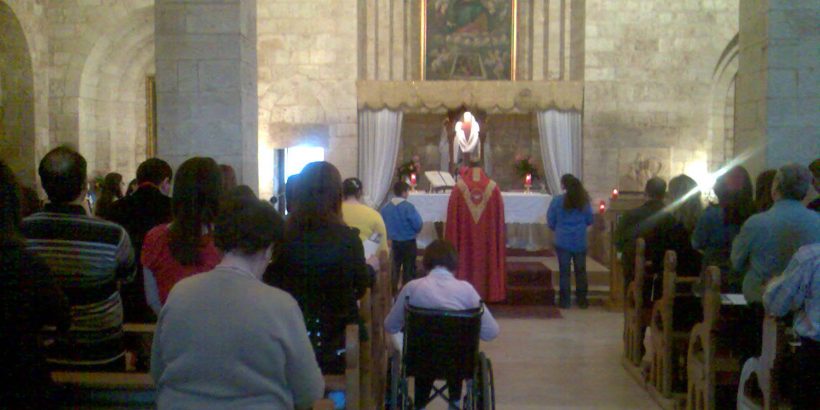 The first question was from Max, who said that he had been trying to come free of criticisms, pondering the matter in his morning preparation. In the had, initially, felt free, but then, when he had achieved some success, stopped making efforts, and the criticisms had returned.

“Have you done another deep preparation since you found the criticisms recurring?” Mr Adie asked.

“Then I think you need to deepen your work. See, if a carpenter put down his hammer and took a smoko every time he had hit in a nail, you would wonder what was in his head? You made a preparation because you had seen these negative criticisms, and felt something. But then, when they retreat for a little, where is your concern for your state, your concern at being the puppet of these negative emotions? You need to return to this each time, to arrive at a point where you accept the reality that you are prey to these criticisms, and are only too happy to put the hammer down once you’ve banged in one nail.”

“With that, you need to see that you are a false centre of the universe. The sun is going around you, the earth is rotating, but your attitude is that you are the centre of everything. So, when other people criticise something it is not something consciously aimed at you. It is more of the same chaos in which you find yourself. This is the world we live in. Do you accept it?”

“It is not only an intellectual acceptance. What does it mean if you accept? You become willing, you are willing, because in our ordinary state we don’t really want to change at all, although it would be for our benefit – our requirements are messy.”

“If I can willingly accept this, some concern for the other party might begin to appear. If it’s someone that you see each day, it’s all the more important that you keep on until it’s very fully digested; so that it doesn’t have power over you. It’s quite possible.”

“You have already had a foretaste of its obedience, subjection; it’s already been subjected. Keep it in subjection. If it takes two hours, then, two hours. Do not get up before then. You are strong, you are young. Stay up all night if necessary, because you have started, and now you have a responsibility to go on.”

“It has no reason, it has no rhyme, it has nothing except misconstructions and malformations to support it. Nothing. Nothing whatsoever.”

“And you are quite right: this is an opportunity, something about which there is no doubt. We don’t often notice all our normal sleepinesses and habits, and so on. And if we do have a glimpse, we don’t realise that they are like a cut to the veins so that the blood is running away. It just seeps away so quietly that we don’t notice, but this blasted a trumpet, there’s no doubt about this. Yes?”

“Is there any imaginary offence by the recipient of this criticism? Have you suffered some wrong?”

“Then it is all the more necessary that you confront it, because these irrational things are utterly unpredictable.”

Gary then mentioned that he had been working on being present when he hesitated in his speech. Mr Adie asked what he had received from that, and Gary replied that it had been a little last week, but nothing this week.

“Do you see that the condition which produces the occasional hesitancy is, in a different way, the condition which interferes with your receiving? There is a tension there. You have to work on yourself and represent what it is. Try and understand it, try and come as near as you can, and have a reconstruction, so you can feel what kind of an inner movement is necessary.”

“It wants a lot of study as to what kind of things make you hesitate. Is the thought which precedes the hesitation clear? Do I hesitate if my thought is clear?”

“There’s a lot of study there, you need to study more. But you have had that as an old thing and, maybe, to a certain extent, essence; although only as a sort of possibility, maybe a predisposition, because you didn’t suffer this until you were eight years of age, or so. Yes?”

“But it doesn’t look as if the trait itself is in essence, and that gives you a possibility. That will give you the check: I speak without thinking, and it is the automatic speech which is checked. So, I don’t want to speak automatically, and this provides a fresh line. You can’t be there with some sort of relaxation switch to turn on a relaxed state like that; but you could have some interest in what you’re going to speak about.”

“Nothing would prevent you uttering what is necessary. If you saw a person about to fall off a cliff, or catching fire. You might not have the words: “You’re going to catch fire,” but you would be able to shout, and this is all that is necessary.”

“So it is a question of what it is coming from, but go on. Don’t get depressed about it, it is a big thing. It is a stick. If it can be turned around it can help you.”

“I have a different attitude to it, I need that, because I always struggle in a certain sort of way. It isn’t always successful, and sometimes it makes it worse, (but whatever the effort and the struggle, if I can relax just a little,) then that makes it possible to move innerly a little bit; (and I may find that this inner movement has led to that inner movement by some path I could not follow, but yet it is real, and the change of my state is real.)”

“I can achieve a certain inner movement by thought, a certain quietness of thought, serious thought. It achieves a certain sort of change in my inner attitude. I become quieter. It is not so closely connected with any ordinary egotism.”

The photo is of the church Our Lady of Zgharta, Lebanon