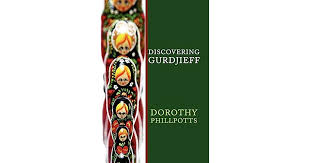 This is a shortened copy of my earlier review of this excellent book.

This worthy addition to the Gurdjieff bookshelf is the memoire of a lady who joined Bennett’s groups during WWII, and thus had the good fortune to meet Gurdjieff in 1948, and to study with him until his death. It falls into two parts, the Bennett years, and then in Paris with Gurdjieff. Throughout, the book is full of instruction, insight and delights. Some slender biographical details hold the storyline together. However, the emphasis is placed not on her life, but on the discovery of Gurdjieff’s ideas, initially as theory with practice, and then as practice with theory.

There is a dedication to her late husband, George, a portrait photograph of Gurdjieff, a page of acknowledgements, a list of photographs, a table of contents, a two page foreword by Peter Brook, a two page preface, 239 pages of text, about 26 pages of further thoughts on topics touched in the text (‘Origins’, ‘Movements’ and ‘Behaviourism’), and reviews of three books: MacKenna’s translation of Plotinus, Man & Time by Priestley, and Icons and the Mystical Origins of Christianity, by Richard Temple. Finally, there is a short but useful bibliography which takes one beyond Gurdjieff related literature.

The volume is nicely presented. My copy is a paperback, 6 by 9 inches. The left hand side depicts five Russian dolls. The back cover has a handsome photograph of Phillpotts as a young woman in the 1940s. It is all simply and elegantly conceived. There are some six photographs, and at p. 240, a photograph of her shortly before her death in 2008 at the age of 92. This photograph is no less striking than the one on the back, lacking only its antiquarian charm, but compensating in conveying something not ephemeral.

Dorothy and George Phillpotts were in Group IV in London in the early 1950s. Mr Adie was one of those who regularly sat in front of Group IV, and their names appear in some of his papers. Other than that, all I know of them is what appears here. The Phillpotts founded a continuing group in Bristol and Cardiff, and I gather that one or more of those group members greatly assisted Phillpotts over the 18 years it took her to get it to this form. Phillpotts had been a sort of secretary for Bennett before the Gurdjieff years.

The book opens with a question: “Who was Gurdjieff?,” and then launches into the discovery which yielded the title. Phillpotts builds from the ground up, describing Gurdjieff’s appearance, then his speech, his nationality and his background. She lightly, but correctly, stresses that he was a Greek of Asia Minor. Phillpotts mentions his education as “physician for the body and confessor for the soul”, and then she answers her own question: “Gurdjieff was to become a great religious teacher and healer – not in his own country, but in the countries of the West.” This is the essence of that first discovery. The balance of the book develops this illumination through the prism of her personal experience, and yet, details of her life which are not pertinent to her search and discovery are not mentioned. It is not so much that she is silent or reticent about these topics as that her perspective is focussed elsewhere.

Then follows a chronological account of how she came to discover herself, beginning with the desire for understanding of the universal issues which gripped her as a child. This second discovery, of her own true voice, is the subject of the epilogue:”

One of the most difficult things Gurdjieff had brought me to, which was ultimately more useful than anything else, was the necessary capacity to doubt. … I had looked for adequate answers to partial questions, and instead I found myself facing an abyss. I leaned over, I shouted, and a voice came back from the other side. It was not another voice that came back, it was my own.

Trying to reconcile the irreconcilable, to reject and compress the parts that would not fit into my idea of an ideal life, I nearly lost what life I had. But he had turned me around. Pulling the string of my awkward perseverance sharply, and to the limit, he had then walked away for ever, secure in the certainty that I would indeed never give up until I had inherited at least an echo of his truth, of his impeccable inner life, and a fragment – infinitely small – of his unquenchable courage and daring. [239]

These simple words hearken back to chapter “Russian Easter” (of 1949), where she recounts how she first came to Gurdjieff’s apartment, and Gurdjieff remarked: “Guest here for the first time … see how she doubt, what she doubt?”[198]. On the next page, she remembers how, at that Easter, Gurdjieff said that he would give her a present (cadeau). The gift, he said, was half of what she needed, but that she must obtain the other half of it later. What happens next sheds, for me, a great light on Gurdjieff, his method and his manner of teaching:

“You come back soon, you remember. Maybe one month. Maybe one year, maybe two. You persevere. You never give up. You not satisfied till you get other half.”

It was very quiet in the room. Aware that the conversation had left me while I needed silence to accustom myself to the challenge of the cadeau, little by little I began to listen to Gurdjieff talking about Easter Mass at the Russian Cathedral. He asked a question. “Some of us would be going to the Rue Daru tomorrow? This feeling experience – such good thing … [198]

So that is, I think, the secret of this book: it is the story of how through discovering Gurdjieff she discovered her essential self.

But while this tells us about the whole of the volume, there is much to be found in the parts which make it up. For example, the texts of Bennett’s lectures on the seven brains are a revelation: as an introduction to the work of the centres I am not sure that they rank very far below Ouspensky’s, if at all. Further, Bennett included otherwise unknown quotes from Gurdjieff such as this one: “in the work of the Emotional Part, you always have the sense of discovering America.” [36] And the allegory of the election of Deputy Steward is a masterpiece, improving the one in In Search of the Miraculous:

Each single sentence casts a light for me on something I had seen partially, or confirms an experience which I had not fully understood. But of course, this material is the ground for the fullness of the Gurdjieff chapters, which seem to fill more than the limited space allotted to them. And I am sure that this was even truer of the role of Gurdjieff in their lives. That year and two months with Gurdjieff must have been fully a half of the plenitude of their life of awareness.

I have mentioned those chapters, and while I could go on quoting from them, I actually feel that this review has now done its work, and it is time to move on. I mean that for both of us. I could expand this review, but I would not be deepening it, and you could go on reading that expanded material, but you now have enough to decide whether the book sounds like one which you might buy.

In the end, this volume introduces us to a wonderful and wise woman, and deepens our admiration of Bennett’s almost innate understanding.