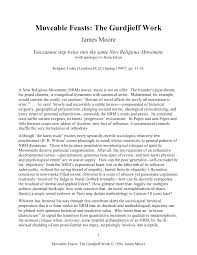 It is significant that Moore distinguishes his critique of the new teaching from any criticism of those bearing it: “These startling propositions advanced with formidable intellectual refinement by French teachers of palpable integrity, left questions. … the iconic Gurdjieff, avatar of effort, now necessarily fell to be deconstructed by his eponymous organisations.  Thus, at a time when the crypto-Gurdjieffian journal Parabola continued celebrating a vast pantheon of religious, mythic, and legendary figures, Dr Michel de Salzmann (Mme de Salzmann’s son) warned of Gurdjieff himself that, “there are no golden legends to be built around him.” Then, if not legend, perhaps sober history was admissible?  Seemingly not: Gurdjieffian historicity was equally unwelcome in Paris because “rather idolatrous.” (again, Michel de Salzmann).

Another point Moore makes is that with this new line came a silence on most of the ideas: “Effectively discarded with both the ‘heroic’ and historical Gurdjieff was the … Ray of Creation, the Table of Hydrogens, the Step Diagram, the Food Diagram, the Enneagram, etc.  They and their unwelcome implications simply vanished from politically correct discourse.  With this final solution to the problem of the Work’s effort-saturated cosmological matrix (enunciated by Gurdjieff, promulgated by P.D. Ouspensky, meditated by Maurice Nicoll, extrapolated by J.G. Bennett and Rodney Collin, and cherished inter alia by H.H. Lannes) the pupil’s presumed new experience of ‘being worked on’ and ‘being remembered’ was posited in a mystical illuminism, which hinted encouragingly at a supernal ‘look of love’ – albeit not specifying its presumably divine, demiurgic, or angelic provenance.  In a doctrinal corollary of seismic implications, fusion with this supernal source replaced individuation as the pupil’s goal.”

This was then given expression in the new “communal ‘sittings’ (where) the highly energised ‘love from above’ professedly entered the pupil’s subtle body through an ‘aperture’ at his crown … as he waited with eyes closed in still, sustained, and intensely refined attention.  With each vital breath … this transforming energy ducted itself ‘arterially’ down the spine … into the sexual zone … and thence up again to exit between the eyebrows.” Moore relates this to a new interest in Indian philosophy techniques which, he says, was not authentic to Gurdjieff.

“The grand trophy of revisionism was Gurdjieff’s mythopoetic magnum opus, Beelzebub’s Tales to His Grandson,” says Moore. “That this book marshalled Gurdjieff’s profoundest insights; that he himself, over decades, honed the English text refining its nuances and cadences; that he saw it into publication … was now outweighed by a single fatal defect. … the reader’s confrontative effort was required – and effort was passé. … A suitable American team, mandated by Mme de Salzmann herself, contrived to “clarify the verbal surface”; to make “the reading smoother; the material seem lighter, more approachable” (Moore here quotes a review by Chris Thompson, in Parabola XVIII (1),  Feb. 1993: 98, adding: “Thompson was actively engaged in this contentious revision which he favourably reviews from a standpoint of ostensible impartiality.”).  In 1992 the bowdlerised version was published and ‘hyped’: Gurdjieff’s authentic text jettisoned; objection made light of.”

Yet, says Moore, “The overwhelming majority of rank-and-file ‘Gurdjieffians’ – albeit now populating a landscape littered with the toppled monuments of their master’s unequivocal teaching – proved models of adaptation.” In a memorable line, he writes: “they saw no deconstruction, heard no deconstruction, spoke no deconstruction; indeed their own vocabulary of experience quickly acquired by osmosis the newly ‘correct’ idiom.”

Moore states that not all were happy with the changes, but: “(their) deep disquiet was veiled; group loyalties, hierarchical organisational structures, patterns of sanction and patronage, and, above all, a well-founded awe of Mme de Salzmann muffled dissent.”

In what is an important note about how New Religious Movements operate, and not only them, I would suggest, Moore states: “… the Work’s post-1980 cultural revolution in Britain was instigated not by its ‘Red Guards’ but by its ‘Great Helmswoman’. Jeanne de Salzmann was an active and formidable 90, and her London delegates Tracol and Desselle in their 70s, when all three commenced dispensing the new doctrine unanimously, simultaneously, and in manifest good faith. … explanation was neither demanded nor volunteered. The oligarchy’s oblique rationalisations were tendered only as intermittent sub-texts … that mutability of form characterises (Gurdjieff’s) way; that tradition relies on inner vibration not exterior semblance; that recourse to striving brings diminishing returns to the point of counter-productivity …”

Moore elaborates on this point, then asks: “what today are The Society’s specifically Gurdjieffian credentials?” (his italics). He suggests only two: that the seniors in the Society include “virtually all surviving Britons who studied directly under Gurdjieff,” and “the choreographic repertoire of his Movements.”  He somberly cites In Search of the Miraculous 129, to say that every religious movement’s trajectory eventually “deviates from its original direction and goes . . .  in a diametrically opposite direction still preserving its former name”.

Moore concludes: “Paris’s tenacious hold over matériel and ‘orthodoxy’; the existence of an extensible dynastic line … and the current well-meaning series of international, oecumenical conferences – all these portend cohesion.  Yet has not the wholesale and hubristic revisionism of the 1980s, culminating in today’s gauche ‘improvement’ of Beelzebub sown the dragon’s teeth of schism? Whenever a movement’s apostolic successors visibly cease to be guardians of the tradition, then, sooner or later comes some slouching Luther. …   That any true Gurdjieffian communion (however dilated in space and time) must pivot on the teaching, writing, and example of G.I. Gurdjieff, is hardly an extravagant or inflammatory proposition.  Its re-espousal seems, to certain informed sensibilities, not only metaphysically apt but urgently politic.”

I conclude here by noting that, in a footnote, Moore wrote: “A widespread and deeply felt reaction against the revision of Gurdjieff’s major work, undertaken unilaterally by The Gurdjieff Foundation (New York), first found voice in Feb. 1993, when the leader of the Oregon groups, Mrs A.L. Staveley, promulgated to senior Gurdjieffians worldwide a critique entitled:  “A Protest Made in Sorrow on the Revision of Beelzebub’s Tales to His Grandson.” In a future article I hope to address in extensis the important issues raised by this revision and its reception.” I am not sure if that article was ever written. But if it was, and anyone has a copy, I would be pleased to read it.