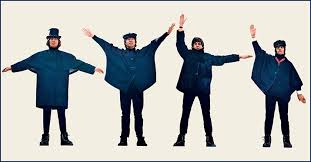 I think that Help! is the most underrated Beatles album of all. While some reviewers quite disparage it, others render it some praise (e.g. for being adventurous in the use of a wide range of instruments), but it seems to me that everyone sees the following album, Rubber Soul, as being the one which heralds the Beatles’ maturity. I am not so sure. In my view, it is with Help!  that the Beatles, having shown extraordinary flashes of depth, now set a sustained course for the deeper waters they were never to abandon in their time together. The significance of Help!  is shown in the consideration that two of the greatest songs they ever wrote, “Help!” and “Yesterday,” appear on this album. In fact, although I am still bowled when I listen to Rubber Soul, Revolver, and Sgt Pepper, I personally think that “Help!” and “Yesterday” are better than any of the tracks on those albums. In addition, it boasts the musically precocious “Ticket to Ride,” and the powerful “You’ve Got to Hide your Love away,” a song so bold that until you know the story behind it, you can’t feel the full impact.

“Help!”, recorded on 13 April 1965, returns to the space of “There’s a Place” (11 February 1963), the realm of the inner life contemplating its bitter-sweet engagement with the social world. Although Lennon said that he had wanted to record it at a slower pace, there is some evidence that he was also happy with the faster tempo. In fact, I have heard some slower renditions by other artists, and they lack the kick of the original. It is the very speed, the wave of energy, which makes the song the triumph that it is. It seems that Lennon had intended not to open but to close with the lines “Help! I need somebody. Help! Not just anybody. Help! You know I need someone. Help!” Had he done so he would have closed the song on a downturn. But he did not.By starting with the strongest pleas, it closes higher than the beginning, with a beautiful harmonious note: “Ooh.”

I was only a child when the song was released, but neither then nor now do I hear despair in it. The older I get, the more the positive phrases stand out: “Now I find I’ve changed my mind and opened up the doors.” What does he mean by that, I wonder? Which doors? He is in a relationship with someone whom he realises he needs more than ever: “But every now and then I feel so insecure, I know that I just need you like I’ve never done before.” It is only from time to time that he feels this insecurity. And even greater than this is the accuracy of his insight: he knows that when he was young he was self-assured. He knows that his “independence seems to vanish in the haze.” The insight, the simple poetic aptness of the phrase “vanish in the haze” are themselves grounds for hope. Anyone who can see so clearly cannot be completely lost.

Lennon was married with a child. The other Beatles were still bachelors. Lennon felt tied to a suburban life while giddying opportunities were being hurled at him. He was no longer independent I the way the teenage rocker had been. He was subjected to endless scrutiny and criticism: whereas as king of the gang in Liverpool he had been confident and self-assured. Seek success and it may unsettle you when you find it. Many have pointed this out, but I think there is also a deeper lesson here: we cannot foretell the future. I cannot prepare, as it were, by deciding in advance what I shall do. But I can prepare my state, that is, how I shall be. That is not said in the song. But it is what I take away from a meditation on it. For me, “Help!” is a ten out of ten song. It is perfect in itself, and it gives you something to think about.

Much has been written about the achievement of “Ticket to Ride,” and it deserves all the praise that has been heaped on it for the music and performance. However, the lyrics let it down very badly, as does the falsetto fade out “my baby don’t care.” It is a likeable way of ending the song, but not in keeping with the heavier sound.

“Yesterday,” is commonly thought to have the most sublime melody of any Beatles song. I would not disagree with that. Yet, the track as a whole, falls short of the melody. Most of all, the lyrics are notably uneven. For example, the words “why she had to go, I don’t know, she would not say …”) looks to set up a sense of nameless and sad misunderstanding, but before it can be established, it is undone by the contradictory “I said something wrong, now I long for yesterday.” So he does know why she went? Is that it?

It is fairly well known since The Beatles Anthology that “You’ve Got to Hide your Love away” was a compassionate and personal address to Brian Epstein: even if all that happened in the Anthology was that the song was played over pictures of Brian. But in his annotated collection of Beatles’ lyrics, Hunter Davies discloses: “John told me that they’d had a one-night stand – whatever that meant – but I didn’t quite believe him, assuming he was trying to shock. Now, however … I’m not so sure. John … was wild enough to try anything once.” (The Beatles Lyrics, 96) When it is heard in this light, it is quite a different song. It is not just to their manager, but to himself as well.

And my own view is that it is also about his relationship with Cynthia. At first, Epstein forbade Lennon to let it be known that he was married, worried about the effect that it might have on the female fans. And the news of it did cause trouble, chiefly in how Cynthia was hounded. But think about the song in that light: it says that he should have hid his love for this woman who said to him “Love will find a way,” but the love disappears. I suspect it is his first reflection on the cracks in the relationship. Then, in addition to that, he has had a fling with Epstein, and, we may guess, Epstein wants to have more. Lennon clearly does not. No wonder he sings: “How can I even try, I can never win …” This is an extraordinarily unique song. Quite appropriately, he sings about hiding his love away, and that is exactly what he does – twice – in the song.

The album has many weak spots: it is a cruel prank of fate that between “Help!” and “Hide your Love,” we are assaulted with the inconsequential “Night Before.” Lennon was very critical of his own “It’s Only Love;” and he was correct that the lyrics were twee and even embarrassing. But the melody is more than good, it reminds me of his lilting masterpiece, “Girl,” which appeared on the next album, Rubber Soul. Maybe, then, it mined the seam from which that gem emerged. But there is yet more which sheds a light on the mood which appears in “Help!” and “Hide your Love.” Davies records that the original lyrics to the song were far grimmer: “Can’t explain or name, I think it’s pain, heh, again. I’m ashamed the flame of love is pained, now and then. you’re to blame, the same as I, I’ll complain in vain, and I still love you.” The words about complaining in vain and persevering in the bitter-sweet love are the overt theme of “Girl.” These alternative lyrics have not been fully worked out. Maybe there was no time, and maybe there were too grim for a Beatles record. But I sense some powerful spirit appearing in this album which does not really emerge again until the classic John Lennon/Plastic One Band album. If you think about it, there is no other record on which “Help!” and the alternative “It’s Only Love” would fit so well.