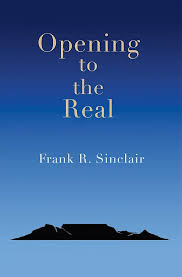 The third of Frank Sinclair’s books is, I think, his best. It is a unique volume, being based around the transcripts of twenty-two sittings which he delivered in New York between 17 January 2014 and 21 February 2020. Perhaps the essence of these sittings is the orientation of the whole of oneself to the mystery of life. This means following a certain internal order in order to die to the known, and to realise I AM – to know and to be the Self. After warning of the risk of misunderstanding, Sinclair states:

… I believe that we come here in order to stand in the presence of the Creator and to pray.

And how does one stand in the presence of the transcendent, of that which is, that which was before we were born? … (Gurdjieff) has said very clearly that one must begin this world by establishing an inner order. I see … that it is an absolute necessity to work as three-brained entities, not just in the thought or through some reaction in the body or some automatic emotional persuasion. But to try to be whole.

… we are created … in the image of God. I am IN God, and God is IN me. … I wish to meet this work for being in silence. It is an extraordinary demand. We have been created in order to meet that high purpose. (p. 117)

That is, I think, the basic approach of this volume. It is complemented by many perspectives, spontaneously spoken by Sinclair as he sensed they corresponded to the moment and the meeting. In the context of the sittings, the main requirement is not to speak, but rather to be present, and be available to say, from one’s being-state, something answering to the needs and possibilities in the moment. Certain thoughts often recur in the sittings: e.g. needing a centre of gravity for our attention, respecting the silence, listening to the resonance of “I AM,” that I work “as if the soul is present,” that we have a nostalgia for the real life, that there is no time, only the present moment, and that “emptiness is consciousness” (from the Dalai Lama, probably referring to the Buddhist idea of shunyata). The most striking ideas are, for me, Gurdjieff’s exhortations that we should collect our thoughts, and that we should try and become Christ, not become like Christ, but become Christ.

In addition, the book opens with a miscellaneous Part One (featuring tributes to Beatrice Sinclair and to Martin Benson, and a letter from Lise Etievan), and a short Part Three (the text of a toast given on 13 January 2020.) These two parts nicely fit into the book, placing Sinclair’s “meditations” in an honourable tradition. Further, Sinclair’s memories of his wife are powerful.

In particular, one memory links Parts One and Two of the volume. When Sinclair visited his wife in her hospital room, to bring her back home, where she would allow herself to go, she said to him: “I am dead. I have died.” (p. 5) Without wishing to try and exhaustively interpret that remarkable declaration, I would read that with Tchechovitch’s recollection of what Gurdjieff told him about his (Gurdjieff’s) grandmother’s last moments. She recited an Armenian saying: “The flower has faded … It leaves this life … The wind will scatter its seed … The bird having gone, you flew way to live in another country.” She then said to those around her bed: “And all you … laugh or cry … as you wish. I am already unheeding. I am already outside.” [Accurately translated from the French only in Gurdjieff: Mysticism, Contemplation …] I think this is a real lesson: a person who has done their work can consciously die, definitively surrendering their soul, and then simply await the natural cessation of physical function.

I shall not engage with the contents of the volume at any length. For me, perhaps the most important section of the book is this one at pp.115-116: “I thought you might like to hear something Gurdjieff said on May 16, 1942. He said: “On earth millions of human beings pray. All of their prayers produce a particular substance, and owing to the law that substances with the same affinities tend to join, to accumulate in one place, the substance produced by prayers accumulates in certain places in space, and then at a single point through contact with that point. The force that accumulates there is even great enough to form an individual. Now, one can take this substance and accumulate it in oneself.” The value of this otherwise unpublished material for understanding the Four Ideals Exercise is obvious [see Gurdjieff: Mysticism, Contemplation …] When  my colleagues and I publish the J.G. Bennett volume we are co-editing and co-authoring, I shall return to the Four Ideals, using some mutually illuminating  material from Bennett.

Returning to Sinclair, his frequent reference to the Hesychasts and their practices are  apt and significant: e.g. “When you pray, you yourself must be silent – let the prayer speak.” (p. 107)

There is one small point: Sinclair quotes Mme de Salzmann a great deal. There is no reason why he should not. But he often cites the saying that in the “lower abdomen … the first body … is connected to the second, the astral.” (e.g. p. 63). In Reality of Being (e.g. p. 139), she attributed this to Gurdjieff. I could be entirely wrong, but I doubt Gurdjieff taught that as a definitive fact. Bennett said that the bodies are connected through the centres, all of the centres. Mr Adie did not say quite that, to the best of my knowledge, but it makes better sense of what he did say about the connection than this pointing to the lower abdomen. Awareness of the lower abdomen (hara) is important, and Gurdjieff could have been drawing de Salzmann’s attention to that, but I doubt it is the link to the astral body. Even if Gurdjieff could make use of saying that for some reason, nonetheless, when we say it, a doctrine is formed, and, I think, uselessly. I repeat: I could be quite wrong, but that is how I see it.

When I first read Without Benefit of Clergy, there was something about the tone and some of the comments which I misunderstood. The same lack of comprehension started to appear as I read this book, too, although less markedly. I am referring to the following sort of comment: “certain self-appointed commentators” and “the gratuitous burden so readily disgorged by these all-knowing entities” (p.3). At first, I thought the author was being gratuitously and sometimes unfairly critical. I now see it quite differently. It is only a hunch, but I think that those comments point to something else: his sensitivity to criticism. It is, perhaps, Mr Sinclair’s way of learning from the lesson of “the extremely sympathetic Karapet of Tiflis.” Well, peace be to him and to all those on the path.