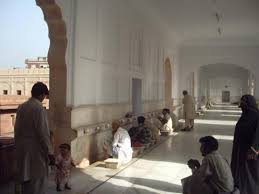 “I remember very little about those first few weeks (at Sherborne, with J. G. Bennett) except that my feet were killing me. It was my own fault. I was wearing thick, platform-heeled boot and the hours I spent wandering about, trying to find where everything was, seemed endless. I fell into bed each night like a stunned mullet and knew nothing more until the infuriating bell clanged pre-dawn and we lined up in the ablutions block to wash. The ritual ablution we followed was eyes and nose first, then one hand over the forehead while the other hand cleaned the ear as we repeated, either aloud or silently, ‘Lord, have mercy. Increase my knowledge.’ Next, the other hand went to work on the other ear with the same supplication and then it was hands, genitals, underarms and, lastly, the tired old feet.”

This is from Diane Cilento’s autobiography My Nine Lives, pp.330-331 (Viking, a Penguin imprint, Camberwell, Victoria, 2006), pp.330-331. The ablutions were the prelude to the morning “meditation,” where Bennett taught Gurdjieff’s contemplative exercises. Now, Diane did begin the first Sherborne course a little late. However, I am reliably informed that there was no ablutions block as such, only bathrooms, some of which had places where one could wash. Then, she recollects this schedule: “Rising for ritual ablutions in cold water at 5.30 a.m., a half-hour of meditation, breakfast of porridge and toast and ready for work by 8.30 a.m. precisely.” (p. 330)

People who attended at Sherborne tell me that her recollection is basically correct. Some people clearly recalled some of the details, while others remembered different aspects of her account. However, someone was able to verify every part of it. One interesting feature is that it seems pretty clear that washing under the arms was not part of Bennett’s instructions. I am guessing that, just as I have, some people found it provided quite a shock, and added it. Of course, I cannot discount the possibility that Bennett included the armpits when speaking to only one or two.

Bennett insisted on this ablutions discipline with cold water, telling at least one person that the washing removes certain invisible substances which form on the skin overnight (and which presumably have to be removed with cold water). Yet, not everyone recalls that he explained why. My guess, for what it is worth, is that knowing that Gurdjieff taught an ablutions discipline, Bennett did explain it, but this was forgotten.

There is also some difference of opinion as to its source: was it from Islam or from Gurdjieff? One person who knew Bennett recalls him speaking about the tayammum or “dry ritual washing” in Islam, where one made the ablutions with sand or dust. And from what I can tell, the aspect of washing one’s feet is probably an addition borrowed from Islam (just as I add a cold rinse of the entire body at the end of the exercise). But, as I have said, Gurdjieff did teach an ablutions discipline, and it is very similar to the one described by Cilento. It even includes prayers, although not the one she gives.

Yet, it is quite possible that Gurdjieff adopted and adapted his discipline from the wuDoo2 of Islam. And a very good discipline it is, too. Why, then, is it so little known and even less used among Gurdjieff’s pupils, especially those of the second, third and fourth generations? (I am a second generation pupil because my teacher knew Gurdjieff. Those who learnt from pupils of Gurdjieff are third generation, and so on.)

I think that the answer is that Gurdjieff taught it to a few people, and left it to them to share it or not. If they valued it and passed it on it would survive. If they did not, so much the worse for them (and for us). Gurdjieff is recorded as having used the saying “What falls from the wagon is lost.” The meaning is obvious, even if it can operate harshly. Surely it depends on what falls, how hard it is to retrieve it, and how urgent the journey is. If the baby in its crib toppled out, anyone would stop to save it, even if pursued by bandits. Yet, Gurdjieff made some ruthless decisions, e.g. when the “Initiation of the Priestess” and some other sacred movements were forgotten, he did not take any step at all to have them preserved – at least so far as I am aware. Now, he did, by instituting this very rule, impress upon his pupils the importance of not forgetting anything lest it be lost. But sometimes good principles have unfortunate results, and this, I would venture to say, was one. I see this discipline as a “baby overboard.”

I think it entirely safe to use the exercise as described as Cilento. Further, people who use this, or the exercise in the form I was taught it, all without exception find value from it – although they often need someone to remind them, and encourage them.

There is much I could write, but some sundry points might be noted. First, when Gurdjieff gave this discipline, people would wash with water of drinking quality from a basin. If you do use water for this discipline, be careful, and only let pure water, preferably distilled or boiled, into any orifice. Do not use water from a shower head for anything but external washing: there are harmful bacteria which live inside showerheads. It is quite enough to wash behind the ears: that often provokes quite a reaction if you use enough water. Otherwise you can get the sort of growths which come from frequent swimming. On showerheads, I quote:

“Bacteria thrive in showerheads and throughout household water distribution systems. While most of these bacteria are innocuous, some are potential pathogens, including members of the genus Mycobacterium that can cause NTM lung infection, a threat to public health. The researchers surveyed showerheads in households across the United States and Europe and found that showerheads “often harbor abundant mycobacterial communities that vary in composition depending on geographic location, water chemistry, and water source,” according to the study. Households that received water treated with chlorine disinfectants had particularly high abundances of certain mycobacteria.” https://www.sciencedaily.com/releases/2018/10/181030091425.htm#:~:text=Bacteria%20thrive%20in%20showerheads%20and,a%20threat%20to%20public%20health. accessed 31 October 2020