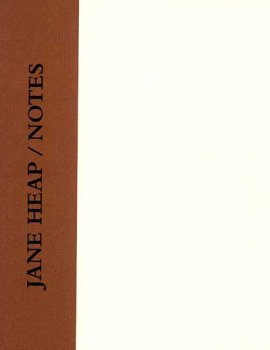 Jane Heap (1883-1964) was a most extraordinary woman. Whatever she had been when she was younger (Fritz Peters paints an unflattering portrait of her), she changed, by her conscious efforts, and became a more mature and balanced person. She has been universally acclaimed as a real teacher within the Gurdjieff tradition: Peter Brook has praised her, his first teacher in the Work. I recall Mr Adie reading a line from the foreword to The Notes of Jane Heap, wherein one of her pupils wrote that: “Her qualities of vision and perception gave to us some inking of the Luminous Certitude of which she is the embodiment.” Mr Adie, who had known her well, said that Jane had written that phrase “Luminous Certitude” about Gurdjieff, and that it was not accurate to apply her description of Gurdjieff to her. Then he thought a moment, and said: “Well … perhaps.” Clearly, she had impressed him deeply. In fact, he quoted or referred to Jane more than he did to anyone else other than Gurdjieff himself. I once heard that Maurice Deselle had said that none of the books by Gurdjieff’s pupils were worth reading, but then corrected himself, and made an exception for one of Jane’s books, I do not know which.

But now, I intend to sing the praises of the book Jane Heap / Notes. There are two books, both published by Two Rivers Press of her notes. This one was produced by Mrs Staveley with the help of David Kherdian. They took the raw notes, which Jane had written for her own use, as a preparation for her groups. The editors then selected parts, and wrote them up as more or less connected pieces. The other volume was produced under the direction of Michael Currer-Briggs, I believe, and they followed the same process except that they did not attempt to turn the disjointed jottings into anything more connected (or if they did, they did not proceed to polish them into prose as good as that of Mrs Staveley and D.K.). These notes had not been prepared for others to read, and it shows in The Notes of Jane Heap.

As I understand it, after Mrs Staveley and D.K. had produced Jane Heap / Notes, the Two Rivers Farm were then sent the galley proofs (I believe) of the English volume. Both had been working on producing a selection from the same material, at the same time. I was told that when Mrs Staveley saw the English papers, she said that they were better than her volume, and she had Two Rivers Press print and promote The Notes of Jane Heap. She allowed Jane Heap / Notes to go out of print.

The first edition of that book had been issued only in a limited run. Mr Adie had only The Notes of Jane Heap, but he made great use of them. After he died, we purchased a copy for each member of the group. When Jane Heap / Notes was reissued in 2002, I purchased it, having already seen it at TRF, and was impressed. Yet, when I read Jane Heap, I turned first and foremost to the English book, and rarely to Jane Heap / Notes.

But now, after some time, I have returned to Jane Heap / Notes. I have always had a high opinion of them. But now that opinion is even higher. The big difference between the two books is not in the English. The English in the first has been tidied up. The English is the second is nonetheless with a certain charm and power: it is so concise that it is unforgettable. In fact, the English of the second may even be better, for this genre of writing, than it is in Jane Heap / Notes.

The big difference is not in quantity: the second volume has more material, although both books are relatively short. Neither is it in the presentation: the first book is much better presented.

I think the really big and important difference is in the selection of material. There is tremendous overlap between the two books: more than half of Jane Heap / Notes is in the second book. But the first book was edited by Mrs Staveley, who chose those ideas which cover the entire spectrum of work. There is an insistence on the importance of aim, of the daily preparation (although no instruction), working against negative emotion, making personality passive, self-observation, and so on. I could choose more examples, but this is a fair sample of the topics dealt with.

Reviewing the above, something is still missing: a taste of the contents. Let me take just one of the entries: “Everyone Has a Dog in Himself.” It is a little less than one page. It is under two headings: “INNER TALKING” and “QUARRELS.” The two parts seem to be disconnected, but they are not. The first part says to try to divide your attention intentionally, but not to do anything about it, for “if you do not try to do something perhaps it will be given.” She gives the advice to separate and to hear the inner talking “as if it were somebody else.” Only by this effort can I “create something for my … future evolution.”

Then under the second heading, she says that Gurdjieff said we have a dog in ourselves, and in fact “sometimes it seems we are only a collection of nasty dogs.” (41) I suggest that the effort is the same, although she does not spell it out: separate, hear myself quarrelling as if it were someone else, do not try to do anything about it and perhaps something will be given – and so I prepare my future.

I think this is something: just as Mrs Staveley and David Kherdian had to interpret the notes, we too have to interpret their product. We receive not only the force of Jane Heap’s thought, but also the influence of the efforts of its two editors.

This review supplements my earlier review of this book: Reveiw of JANE HEAP/NOTES | Gurdjieff’s teaching: for scholars and practitioners (wordpress.com)