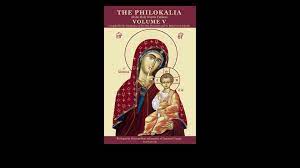 After many a long year, an English translation of the fifth book of the Philokalia is available. This is not the eternally promised translation by Kallistos Ware, but one under the direction of the St George Monastery, Jerusalem. For some reason I do not understand, it was published by “Virgin Mary of Australia and Oceania.” Still, they are welcome to the party. If you wish to purchase the volume, or to learn about the monastery, visit this site: https://www.oceanitissa.com.au/shop That takes you to the shop, but from there you can explore the other pages.

The cover of the volume is an excellent icon of the Virgin Mary of Stillness. The icon was written, and the graphics of the entire book, were produced by Anna Skoubourdis. The book runs to 318 pages, with a fair glossary, and a good bibliography. It has some very helpful footnotes, but it lacks an index, and worst of all, the left and right margins of these moderately large pages are too thin. The contents page is badly set out. There are other issues with the typesetting and layout, but they are minor.

There is a short prologue by the Metropolitan Athansios of Limassol, a translators’ introduction, by Jonathan Gardner and Timothy Fisher, and these gentlemen have done an excellent job. The three main texts are (1) “An Exact Rule and Method for Hesychasts” by Kallistos and Ignatios Xanthopoulos; (2) “Chapters” by Kallistos Angelikoudes; (3) “On Union with God and the Contemplative Life” by Kallistos Kataphygiotes.

There is nothing new which is, I think, of practical importance. There are some brilliant passages which express the Platonizing Mystical Theology of the Hesychasts in clear, even startlingly clear terms. The texts also provide evidence for the continuing vitality of the Prayer of the Heart including the Jesus Prayer, and of the writings of Nikephoros. It is these latter which I have contended were so influential for Gurdjieff: Gurdjieff: Mysticism, Contemplation, and Exercises (OUP, 2020). One practice from earlier volumes which makes a welcome re-appearance here is that of stopping thought (87 and 201), although it is said in such a way that its significance could be missed.

Other than that, the main points I took from this were that, even in later periods (14th century and later), there was an interest in what it means to be made in the image of God, in typology (there is much discussion of archetypes, and other aspects of typology), and form and formlessness. But above all, there is extensive discussion of the Neoplatonic notion, well known from Plotinus, that our problem is that the lower senses and person are distracted and fragmented, and that unity of the entire person must be realised to be able to experience unity with God. Typical of the Orthodox Christian heritage, the writers do take care to say that this process of theosis is not a literal and absolute case of the human becoming divine, but only relatively so and on our scale.

A good deal, in fact the great bulk of this work, is taken up with what are really exhortations. To an extent, this is a question of literary style, and these texts are far more literary than the earlier ones found in volume 1. Readers of C.S. Lewis’ The Discarded Image will be aware that this was also the case in the literature of medieval and renaissance Western Europe. In addition, it has the value of encouraging the student to go to the teacher and ask questions about how to obtain the promised blessings, should he feel that he is not experiencing them (which must invariably have been the case). I suspect, although I cannot be sure, that in these spiritual texts, there is another purpose: it is material, the reading of which, occupies the mind of the novice. It is a way of filling the mind with something less damaging than what might otherwise fill it.

What emerges from this is the critical fact that most of these texts, and all of the later ones, were prepared for a specifically monastic setting: monks who have been given them by a teacher in order to prime themselves for participation in the liturgy and the daily round of life as a monk. To remove them from that context is to lose sight of how the authors had intended them to be used. To a monk, these writings have something of scripture about them, and also something poetic – not to suggest that scripture and poetry are inimical categories, they are different means of description. But for a monk, they intersect in these texts. What seems to us to be just another description of some sort of vague feeling or a general exhortation, could be, for the monk, something which fired their hearts – and which kept thoughts of a lower order out of their minds.

Some of the ideas presented here are, as I stated above, penetrating. Consider this:

… because the intellect is philokalic (Beauty-loving) by nature, it should desire what is superior in every way, not only to enjoy it, but also to ‘suffer’ the superior change beyond intellect because … the mind also undergoes change in accordance with what it sees and delights in. (Kallistos Kataphygiotes, 231).

The converse is that the mind which drinks in what is lower becomes infected, perhaps corrupted by it. This reminds me of a saying of Gurdjieff’s, which Mr Adie would sometimes quote but we were not able to understand: “Guard the purity of your impressions.” How can we put this into practice? I will not write about that here, but this preservation of psychological purity is part of the purpose of these texts, all the more effective because it is just put into practice rather than preached.

I do not know whether Faber and Faber will proceed to publish the fifth volume in their series. This version, however, is useful and even very good. Some of it is quite splendid. But for the reasons given above, I could not say that its contents are essential for anyone interested in Christian spirituality, and even less for those who are primarily students of Gurdjieff. But it is worthy of respect, and to have a copy nearby and able to dip into it from time to time would not let anyone down.