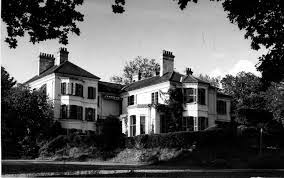 Frances Allen wrote an article titled “Coombe Springs and its Beginnings,” which was published in two parts in The Enneagram, June and September 1976. I only possess a typescript copy.

The centre of the article is her meeting with Gurdjieff. However, the context of that meeting is that she was working as a teacher in Purley, Surrey, England in 1930, when she met J.G. Bennett. She and her husband, Jack, began attending Bennett’s meetings, and later Ouspensky’s. She recalls a striking work day at Gadsden with Mme Ouspensky, who said to her: “Mrs Allen, you are very suspicious.” The thing is, this was true.

The Allens began attending, with “intense interest,” both Ouspensky’s and Bennett’s lectures. Even during WWII, they continued to travel to London to hear Bennett’s talks. She states: “I was very frightened during the Blitz but the ideas of the System were of more importance to me than the danger.” London was, of course, the main bombing target. To travel in to London at that time was quite a courageous thing to do.

Bennett took the property at Coombe Springs, and they began to attend for Sunday work, thus realising Bennett’s plan of a Work community similar to Ouspensky’s at Lyne.

At the beginning of 1944, she started to develop multiple sclerosis, with trembling and fatigue. She relates that on one occasion, they were at the school. There was an “All Clear,” and neither sign nor sound of any plane. But “a clear command came from within myself which said: ‘Send these children away at once’.” She immediately sent the children home. Just at the time when they would have been leaving, had they not already been dismissed, a bomb struck and destroyed the empty school. Allen states: “I am quite sure that the warnng came from within me because I was aware of my inward state and was an ardent follower of what we called ‘The Work’ or ‘The System’.”

Eventually, they moved in with the Bennetts at Coombe Springs. There, her M.S. began to improve. When Bennett re-established contact with Gurdjieff in 1948, she asked if she could join them. Bennett refused to allow her to attempt the trip to Paris on the grounds that it might kill her. She pondered it, then returned to Bennett and declared that if he would not take her with one of the groups, she would leave, and go to Paris on her own initiative. He included her in the next trip. What next occurred is the highlight, I would say, of her memoire:

When I arrived, I was placed opposite Mr Gurdjieff at his famous supper table. He looked me straight in the eyes and with a wonderful smile stretched out his hands towards me and I felt a strength flowing into my weak body. From that time on, I had a remission of the multiple sclerosis which has lasted for nearly thirty years.

By the time she left Coombe Springs in September 1949, she had “no visible signs” of the M.S. This is, I think, quite significant. Had Bennett told Gurdjieff about her condition? Or did Gurdjieff simply divine it? Either way, what happened? Did Gurdjieff in fact liberate her from the symptoms of her condition? One does not wish to read too much into it, but it does seem that Gurdjieff’s extension of his hands played a part in the healing. In the Paris transcripts of 1944, he makes special mention of the hands in the “Help for the Deceased” constellation of exercises. Further, one can suspect that, as with the voice she heard during WWII, it was the inner work which had been done which allowed such an act to happen.

Bennett himself states that the fact that Lazarus could be raised from the dead showed how highly developed Lazarus must have been. I wonder if the same consideration may not apply here? If so, this introduces a new factor into the controversial issue of what I might call “miraculous healings.” We tend to think of these as if the only question where whether the healer instigates a process which will objectively do something to the recipient, analogous to administering a sleeping tablet. In fact, such cures may depend also upon the being state of the person who has been unwell. There is an analogy for this even in standard medicine, for the one substance may cure one person but not another, for all sorts of subjective reasons.

I do not think these questions at all unimportant; and it makes me wonder whether any of Gurdjieff’s pupils were also capable of such cures? I do recall one woman who had been with the Adies telling me that since she had begun with them, her headaches, which had been severe, had almost entirely disappeared.

The second instalment of Allen’s article speaks about her time at Coombe Springs with Bennett. She records that, some time in or after 1950, Bennett had so many groups that he had to delegate other people, including herself, to take them. She mentions, too, the influence of Mrs Winifred (Polly) Bennett, amply bearing out Bennett’s own comments about her being candid to the point of confronting, yet capable of great kindness.

Allen sees the purpose of Coombe Springs as having been to help them separate Personality from Essence, and – she implies – to develop Essence. It is not without relevance that she states that the triangle in the centre of the Enneagram represents “the Godhead: Father, Son, and Holy Spirit.” As she says, that symbol is of life, and so this simple comment adds to our understanding of it.

It is almost touching that, having said very little of any great significance about life at Coombe Springs, she concludes: “The real side was so much deeper that I almost fear to write of it, my words are so inadequate to describe that which was there.”

The booklet is available from the J.G. Bennett Foundation.