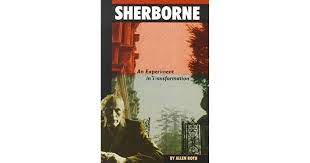 There is a rather valuable and well-written book, Sherborne: An Experiment in Transformation, by Allen Roth. Only 118 pages with an index, it is, nonetheless a contribution to the Gurdjieff and the Bennett literature. I shall have to skim over its contents, but it does provide a remarkably good picture of the developing life at Sherborne, what was done, and why.

Sherborne is where Bennett ran his four ten-month basic courses (he died soon after the commencement of the fourth course). He had planned to hold a further course for those who had completed the basic, and had shown that they could make use of what they had learned, in life. Sadly, it was not to be.

There are nineteen chapters. The first chapter introduces some of the key players: Gurdjieff, Bennett, Michael Sutton, and Roth himself. Chapter 2 opens with an extract from Bennett’s prospectus for the course, which stressed that to make a better world for ourselves and others, “inner change must come before outer change.” (7) The highlight of the chapter is the meeting with brief first Bennett. He clearly made a powerful impression.

Chapter 3 then speaks about Bennett in more detail. Here, Roth makes a forgivable error: Bennett did not graduate from Oxford in mathematics and chemistry, or in anything else (10). In fact, he never studied at any university. The next chapter describes Sherborne Manor House, and how the Bennetts came to purchase it. One matter strikes me as odd: Roth says that Gerald Wilde considered Bennett to be a “magician.” Roth thought that Wilde might be referring to:

a photo – pinned up in his stableblock room of a Greco-Tartar looking dervish (Gurdjieff himself) in white robes and the conic Mevlevi hat. (20)

This is the only reference I have seen to such a photograph, but if it was Gurdjieff, it suggests that his association with the Mevlevi than previously known.

On 17 October 1971, Bennett opened the first course (Witness has 15 October, 303). His recollection of what Bennett said is of value, here and elsewhere. There is an instructive anecdote around preparing porridge for breakfast. The person he was working with made a stupid mistake, but Roth saw that he had a role in it: he knew that something was wrong, but had not checked the recipe for himself: “The incident reminds me of Bennett’s oft-repeated warning: most efforts will require another effort without which our work comes to nothing.” (25) That is impressive.

On re-reading this book, I began to realise that what Bennett had at Sherborne was not just a college or academy, it was a community, where “the essential ingredient for learning would come out of the daily needs of the community” (29). With this perspective, no problem which confronted the community would be a purely external one.

I appreciate his comments about the contemplative exercises which Bennett taught:

As the weeks progressed, new exercises were introduced, each of them requiring skills developed by previous exercises. It became evident that they formed a graduated series, beginning at an elementary level, where one learned first to distinguish between attention and thought. If anything was common to all the work at Sherborne, it was the directing of attention without which none of what followed would have been possible. (30-31)

Roth makes some great comments about food, most of which are also in the Sherborne booklet titled Food, and this one on fasting: “the rule of breaking the fast with a small quantity of light food was followed by a sensation of well-being that could be completely joyous.” (32) Bennett banned drugs completely (43). This prayer, which so far as I know, was written by Bennett (who warned that it could become automatic), was used as their grace:

All Life is One, and everything that lives is holy.

Plants, animals, and men; all must eat to live and nourish one another.

We bless the lives which have died to give us our food.

Resolving by our work to pay the debt of our existence. (53)

Mrs Elizabeth Bennett, herself a favoured pupil of Gurdjieff, emerges as quite wise and formidable (36).

In connection with movements classes taken by Anna Durco, who had met Gurdjieff, Roth writes:

She told us to sense our arm. This verb, “to sense,” had taken on a specific meaning owing to the morning exercises. Sensation was a palpable substance in and about our bodies which, by experiment, responded to the movement of our attention. It was a basic tool for our work with movements. (40-41)

Chapter 7 opens with a fuller account of the morning exercises, which were commenced at 6.45am, after the ablutions (28 and 44). Men and women sat on different sides of the hall: an arrangement which Mr Adie also had (44 and 101). Roth returns to the question of sensation:

I felt like I had entered kindergarten, to rediscover a world closer than my own flesh. Words like “sensing” and “feeling” were used, for the first time in memory with an idea behind them to give them meaning. By sensation, Bennett implied an actual substance, having physical-lie properties such as viscosity, portability, and so on. He gave us a couple of hints of what to look for, and we began seeking it in the body’s extremities where it is more readily detectable. (45)

An experiment with filling one arm with sensation, and moving it, reminds me of something which Mr Adie did from time to time. I shall not quote it at length, but the entire section is most definitely worth studying. Roth also makes some interesting comments on feeling (45-46) but they are rather less clear.