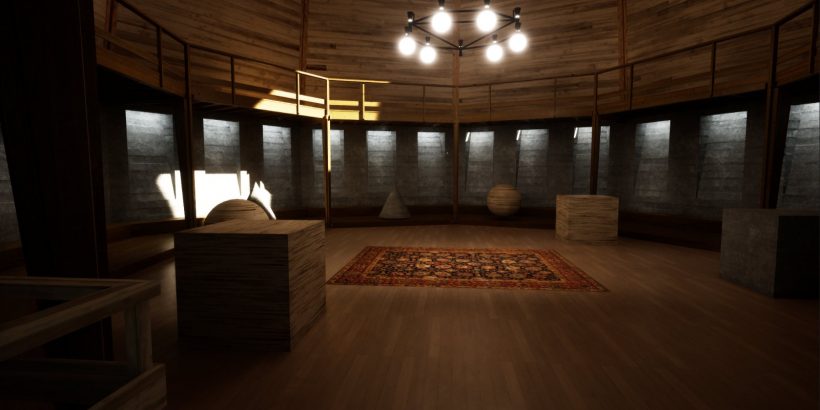 The above picture was made by David Blake, son of Anthony G.E. Blake, one of John G. Bennett’s closest friends and collaborators. It is a small part of his project of a “virtual Djamichunatra.” For more details on the Djamichunatra which Bennett and his students, see his book Witness. In my forthcoming study of Witness and its message (I shall post details when they are available), I say much more about it.

A.G.E. Blake has performed the valuable service of recalling that Bennett had seen his work as being to develop a new form of worship (also hinted at in some of Bennett’s books, but often overlooked – Anthony is able to isolate and emphasise this). I understand this to mean a new form of entering into heightened sensitivity to the divine or higher worlds. For that, of course, I need a change of being. This is, or was, or can be, one of the aims of the Christian Divine Liturgy.

How, then, to develop a new form of liturgy which can facilitate the raising of my being so as to be more conscious of the higher worlds?

Gurdjieff brought his movements and his contemplative exercises. Perhaps they include this purpose in themselves. Perhaps the Subud latihan was something like that, at least when administered by people like Subuh and the Bennetts.

Bennett developed some of his own exercises, and these may have been part of that effort to develop a new form of worship. But I suspect that his greatest achievement in this regard was the building of the Djamichunatra at Coombe Springs. Before commencing its construction, he had visited the Middle East and taken the measurements and made sketches of mosques and tekkies, finding some remarkable correspondences among some of those buildings in which he most felt an atmosphere which we might call sacred. He guided the work of the architects and builders. He obliged them to make powerful being efforts, to do what seemed impossible, to not make a decision unless all agreed (which meant a harmony among their states), and to aim to produce an objective work of art.

I wonder if he did not succeed in helping to midwife the Djamichunatra, for in Witness, he tells how some of them could sense that the building itself began to direct its construction. When one considers what the ancient Semitic theology called “typology” tells us of the building of temples and churches, this means that a pattern on a higher level had begun to act directly on our level. Perhaps there was even something of a miracle about it: the laws of a higher cosmos began to act in a lower.

That is, Bennett stumbled upon an extraordinary phenomenon:the relatively conscious construction of a certain building could instigate a process in which more than the combined efforts of the people involved were poured. Hence, a new place of worship appeared on the earth, in which previously known forms such as Gurdjieff’s exercises and movements acquired a new potency. Perhaps the work to develop new forms always shares this quality of continuity with previous efforts.

This is why the deliberate demolition of this building was an act of barbarism which has impoverished all subsequent ages. Hence too, the value of David Blake’s work.

I call for those in the Bennett line to band together and to build another Djamichunatra.