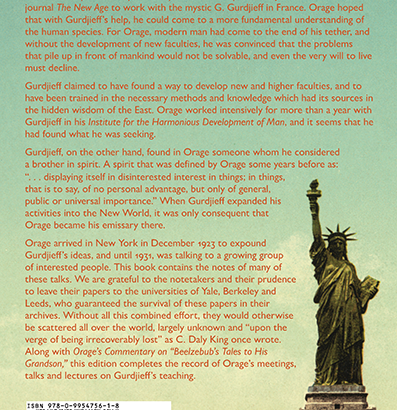 I have recently returned to the study of chief feature, spurred in part by both the power of Orage’s analysis in Gurdjieff’s Emissary in New York, and the frequency with which he returned to the topic. Clearly, he believed it was of the utmost importance, as did Gurdjieff and Ouspensky, yet, apart from some of his pupils such as Mr Adie and Mrs Staveley, it seems to me, at least, in my acquaintance with the Gurdjieff work, to have been somewhat neglected.

I will open by speaking of a recent case study, and only then turn to the theory. However, I should mention at the outset that Gurdjieff said this by way of description:

Every man has a certain feature in his character which is central. It like an axle around which all his ‘false personality’ revolves. In Search of the Miraculous, 226.

“False personality”, we might recall, is our wrong idea of what we are, our false self-image.

The case study is this: in the last month I have been privileged to be able to help someone see what is quite possibly his chief feature, and it is that he is “haunted by the past”. I have wrestled with the question of whether I should disclose how I helped him, but in the end, it seems to me, this is not a field for amateurs, and the most important thing – if I wish to see my chief feature – is to find someone with a little more understanding. At the end of the day, only such a person can help.

Back to this feature of being haunted by the past, or at least certain aspects of it. The word “haunted” is used quite deliberately: for the person I am speaking of, it is as if he is inhabited by something spectral, appearing when unexpected, The Oxford dictionary definition of “haunt” points to something we might often miss, that the word actually refers to when “(… ghosts etc.) visit frequently with manifestations of their presence and their influence …” Note that last phrase, manifestations of their … influence. This man has been almost driven mad by the influence of the past. Our beloved Skeat cannot be sure of the etymological basis of the word “haunt”, but he thinks it is most likely derived from a root meaning “to go about”. And that is what this man’s chief feature does: it goes about in his poor common presence, wreaking havoc.

Interestingly, when he did see something which we both believe could well be his chief feature was (after all, there is no certainty it is his chief feature), he immediately recalled two incidents when, first, one of his parents had taunted him with that feature, and secondly, when someone in a Gurdjieff group had told him that he was too much in the past. He had been quite open to the idea at the time. He wondered if it was true, even though he felt that did not necessarily mean that what he was saying was wrong. Although his interlocutor had only been concerned to shut him up, he had returned to the comment from time to time. Also in that conversation, another person, who had been with Gurdjieff, intervened saying: “But one cannot pretend that the past existed or that it has an effect.”

This is quite significant for two reasons. First, chief feature is not necessarily totally divorced from reality. I would suggest that it has to be taken into account rather than condemned. That was how my friend felt: even if he was very influenced by his memory of what had happened, nonetheless, that should be taken into account. Yet, as Gurdjieff pointed out, in the end, its involuntary manifestation must be destroyed (Miraculous, 267).

Second, and most importantly, chief feature can become chief strength. Even being present to the operation of chief feature is a tremendous help in one’s work, because it is always there.

Since the likely discovery of his chief feature, he has felt a peace he had not known. It is not continuous and deep, but it is never too far away, and rarely without an influence. He believes that it marks a turning point in his life. I trust it may be so. Certainly, I have seen changes.

But now I need to come back to the theory: the examples of chief feature which Gurdjieff gave in Russia were artistic portraits. For example, of one man he said that he was “never at home”, and of another, that he had a “tendency to argue with everybody about everything” (Miraculous, 267-268). When Ouspensky said that this was not even psychology, but rather art, Gurdjieff replied: “And psychology ought to be art … psychology can never be simply a ‘science’.” (Miraculous, 267).

The example of the man I gave conforms to this model: the description is a lapidary portrait. This does not mean that it has to be right, but it shows at least an ability to grapple with the sometimes indefinite nature of chief feature which Ouspensky mentioned (The Fourth Way, 177).

Jane Heap came to say that chief feature was usually related to one of five characteristics: Greed, Self Pride, Lying, Fear and Sex (Notes, 120). Jane Heap is almost certainly the origin of Kathryn Hulme’s notes at the end of Gurdjieff’s Emissary, 568-569. Jane Heap’s understanding was formidable. But these ideas on chief feature are rather schematic and analytic. If you use the index to find Orage’s teaching, you will see that Orage’s interpretation is more fluid, and hence, I suggest, more likely to be correct in this area. Sometimes we need to be analytic and schematic: but here, I think, it would be a mistake.

Much more could be added, but this may be sufficient to start.