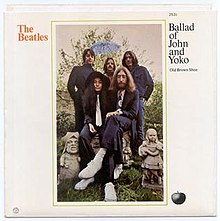 I do not consider this to be one of Lennon’s great songs, but it is much under-rated both for its musical and its cultural depth. It draws on a variety of musical styles, not only the folk-ballad and rock and roll, but also the Mexican style of guitar playing (as one perceptive reviewer noted, it uses the cadences of “The Honeymoon Song,” which they played on BBC radio). Intellectually, it draws not on Dylan’s “Ballad of a Thin Man,” but rather on the native English tradition of ballads such as “The Ballad of Dick Turpin,” and most of all, on Oscar Wilde’s “The Ballad of Reading Gaol.” This is especially evident in the intense Christian focus of Wilde’s ballad, which is picked up but distorted in Lennon’s ballad.

Having said that, I must confess that I cannot listen to it very often, despite the excellent job which Lennon and McCartney did on it. It is simply too megalomaniacal, too redolent of the worst of Yoko Ono’s influence on him, too self-absorbed. In other words, it is basically a phenomenal waste of phenomenal talents. But there is a lesson in that very waste; and that is what I am working up to.

When I wrote my little book John Lennon: Harmony out of Pain, I was only aiming to tell the story of how the man had found peace, security and affection in his family life, and how this marked a genuine, hard-fought-for development in a life marked by real and searing pain. I did not set out to deal with all of his songs, let alone cover the whole of the John Lennon story. Now, however, I intend to deal with another aspect of his emotional growth: the way he outgrew the megalomania evident in this 1969 track, which, incidentally, went to number 1 in both England and Australia.

I have no qualms at all in describing what we hear in this song as “megalomania.” And yet it is a deceptively deep song. For example, it opens with the words: “Standing in the dock at Southampton …” which, by itself, means that he is the defendant in a court case being held in that venerable English location. It is more correct, when one is travelling to say that one stands on or at the deck. But by this simple device, Lennon alludes to Oscar Wilde’s experience. Only five or six months before, Yoko and he had been arrested by the police on drug charges. Lennon seems to have drawn a romantic association between their case and Wilde’s (as Jagger and Richards did in the film for “We Love You”).

This is enhanced by the next lines which reveal that he is “in the dock” because he is: “Trying to get to Holland or France.” He is seeking to flee England. But he is finding that impossible because “The man in the mac said You’ve got to go back.” That is a witty and effective if vicious five word description: “the man in the mac.” It conjures up someone nondescript in himself, devoid of individuality, except in so far as he is wearing a dreary raincoat because he is bothered by the rainy English climate. It manages to take a swipe at both the English and England.

However, Lennon’s reaction is absurd and self-dramatizing: “Christ you know it ain’t easy. You know how hard it can be. The way things are going, they’re going to crucify me.” I accept that he is hitting back at the Americans who made an absurd fuss about his wilfully misconstrued remarks about Jesus. But even taking that into account, it is still ridiculous, and most significantly, a symptom of the selfish self-love which Yoko Ono taught him to indulge.

The bridge is an interesting section: “Saving up your money for a rainy day, giving all your clothes to charity. Last night the wife said: ‘Oh boy, when you’re dead you don’t take nothing with you but your soul.’ To which Lennon adds an emphatic “Think!” It is hardly an earth-shattering revelation. But Lennon treats it as Yoko’s own discovery (which given her consumerism in stunts like ordering every single item in Amex catalogues, is quite puzzling). However, in terms of the song, this bridge is important: it marks the beginning of a shift from the aggressive cataloguing of his complaints.

The next verse contains the very humorous line: “The newspapers said, ‘She’s gone to his head, they look just like two gurus in drag’.” Lennon is laughing at himself, but on his own terms: Yoko and he look like gurus not something else, like hobos.

The final verse then provides the key to the entire song, for having listed how unfairly treated and reviled they have been, Lennon sings: “Caught the early plane back to London … The men from the press said we wish you success, it’s good to have the both of you back.” That is, like “Ob-La-Di Ob-La-Da,” it is a reversal song, everything turns around in the fullness of time (a point I saw Yoko making not too long ago).

That is, Lennon mercilessly captures  the fickleness of opinion and fortune. It is ultimately a very optimistic song. That it is an optimism fueled by egomania, is most unfortunate. But it helps to explain the drive and verve which Paul and he brought to it. Once you’ve grasped that he is rejecting the pessimism of Oscar Wilde’s “Ballad of Reading Goal,” the song sounds very different. As stated above, the Christ-obsession is still too much for me to be able to listen to it very often. But it is not fatal for me, because that very obsession shows that Jesus was still the most important religious and cultural figure for Lennon.

Before I finish, I might note that Ian Macdonald writes, in his invaluable Revolution in the Head: The Beatles’ Records and the Sixties, that when Lennon discovered LSD, it elevated “his psychologically conditioned sympathy for the underdog into a universal concern for love and peace which, striking him with the force of conversion, quickly inflated into Messianism” (278). He then notes, accurately, that Lennon once called a sudden and “urgent” meeting of the other Beatles at Apple, at which he solemnly announced to them that he was Jesus Christ. I am not sure that Macdonald’s theory is correct in terms of cause and effect. That is, there is no doubt that the “conversion” he refers to did in fact take place. But that it was caused solely by LSD is unprovable. LSD was probably a factor since it was such a large part of Lennon’s life. But how can one separate that out from his general development from adolescence into adulthood? There was a lot of idealism in the 60s, and by no means everyone who tuned into it did so through chemical means.

Almost everything Macdonald has to say about the Beatles is interesting, and deserves respect, even when I disagree (which I often do). But he makes a wry point he writes at 276 about the Lennons “behaving as if they had personally invented peace.” And he is absolutely on the money when he states that: “Of all the dangerously silly ideas Ono unloaded on her spouse around this time, the most damaging was her belief that all art is about the artist and no one else” (277). I would supplement this by adding that Lennon himself was quick to add other people into the equation. For example, when the cartoonist Al Capp ripped into Lennon for the Messianism of this track, Lennon said, “yes, they’re going to crucify me … and you … and everyone else.” It is a sort of Zen retort. It is not logical, yet it makes sense.