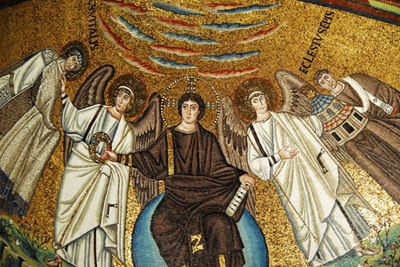 This is the second extract from the meeting of 28 February 1979. Mr and Mrs Adie were both present, but Mrs Adie took most of the questions. The next was from Desdemona, who said that she had remembered herself coming into a sculpture class, which she was teaching, and as she did, she recalled one student who resists any comment at all about his work. It had brought to her a question about her attitude to him.

“This is very interesting,” said Mrs Adie. “You were wondering about how your attitude would be when it came up against him and his attitude of resentment.”

“This is a very good example of how we can begin to work on our attitudes. We see we have some attitudes which seem rather wrong to us. We see how they affect our behaviour, because in this case it makes you reluctant to speak to him. There are all sorts of relationships, with children and family and others.”

“I have a picture of how that relationship should be, and I can make that a more conscious picture. Try. It is something in the direction of playing a role. It could be very good for you to try and speak with him in the right way, one which does not cause offence.”

Desdemona added that she had also seen how she has two other attitudes which concern her: about money, and “about certain men with certain racial characteristics”.

“Yes, that second one has no real reason, does it? It is a bias. There is nothing open about it. It is not exactly free. So what do you think your attitude should be there? This is something which will most likely take place without any warning.”

There was no answer. Mrs Adie continued: “Would you say that it is a very strong attitude? Deep rooted? Then it will take a little while to break down.”

Again, after a little silence, she said: “You have to think about that. Bring it to your thought sometimes. If you always react in that way, of course, you are always complete in its power. Its prisoner. But maybe you can collect some material in your head and in your feelings: “I don’t want to react that way”. It’s not one of the most damaging things in your life. It’s just a moment’s reaction, with one student in one class, however, if the knowledge makes enough impression on you, then when you meet one of these types you will remember, and you try and be a little bit more impartial. You don’t believe in your reaction quite so much. You don’t justify it.”

“Keep it in perspective: it is not a violent emotion, is it? No.”

This next exchange is quite lengthy, but it is important. One of the things about the Adies, particularly Mr Adie, was how they could help you confront your own habitual way of thinking, self-excuse and self-justification. They could help you dig beneath the surface. People would bring something, and they did not just accept what was said – they looked for the truth of the exchange, and if that meant questioning the accuracy of what had been said, so be it. This was the sort of exchange we could never get from a book. It is unique to a situation where the pupil is before a teacher with higher being and reason. The exchange began when Perry said that he had a “complete inability to plan.”

“You have plenty of friends,” said Mrs Adie, meaning that everyone had the same problem.

Perry said that he can’t even find a wish to want to plan anything, but rather was content to cover up his failures.

“This is an old story, and I am repeating myself very much, but there has to be this disinclination. It has to be there. You have to battle with it, and feeling will come from that.”

“It is no good waiting until you want to do something that is very difficult although something somewhere tells you that it is the right course. But without that effort, you will never have the feeling. You cannot allow it to get the better of you. Don’t wait for the wish, the wish will come after, but for now your head can tell that the intelligent thing to do is to make efforts despite this reluctance.”

“You are telling yourself too much that you have no feeling. It isn’t true at all. We are not used to thinking constructively. It requires effort to use the higher part of the intellectual centre, and you cannot think about your work and the plan for the day with just the formatory part of it. It is thinking about it with formatory centre which will lead nowhere. Formatory thought can seize on and accept any old thing. Any excuse. It is not really thought.”

“Are you satisfied with your situation?”

“No,” admitted Perry, “it is awful. I feel like I am going around in circles.”

Perry said that he had something inside him which was against himself.

“It must be,” responded Mrs Adie. “You are a two-natured being. This beating around the bush is an old enemy of yours. Ignore it.”

“But it’s me,” countered Perry.

Almost unbelievably, Perry did not take stock of what Mrs Adie had just said, or say he would like time to ponder it – he rushed into his next speech, the essence of which was that he very rarely sits down for a preparation. He just wants to sit in the garden, eyes open, and not look at anything. It brings him a good, deep way of being for a short time. So it is a state where he does not think things and does not plan things. That is the state he wants.

“Yes, but your thoughts are still going on, even then. You’re not really empty of thought all that time. It must be a sort of dream state, don’t you think?”

Perry didn’t directly answer, but said that it doesn’t mean he is not trying to have sensation, although his efforts in that respect were lacking in any order.

“It is resting, it is relaxing, and it isn’t negative – but it isn’t working,” the stress was Mrs Adie’s. “You’re not going against anything. Work necessarily involves going against the resistance. What you’re describing is comfortable: too comfortable.”

Perry once more countered, because it was really a counter, like a move in chess to save the king from checkmate: “I don’t know what the resistance is in me.” Yet, he had opened by describing resistance.

But Mrs Adie was patient: “When you find that you can’t get over a barrier, where you are telling yourself all these stories, then you know that the opposition is speaking. It isn’t true that you can’t work and find the resistance: it isn’t true.”

“You know how to relax, but you are having difficulties in making a balanced effort, and maintaining it long enough to come to a different state, when you can make a plan for the day which is practical and useful. A refusal to do it is simply giving way, a believing of all these lies you tell yourself.”

“In the preparation, one of our purposes is to try and reach our higher parts. We need eventually to make contact with our higher centres. Do you think you can do that by sitting and looking at the garden, and dreaming? No.”

“I don’t even know what my higher centres are,” objected Perry.

“Of course you don’t, but you need to find out,” Mrs Adie replied.

After a pause, Mr Adie asked: “What is the essence of the answer you have received? Have you understood anything?”

“Well, I have understood the importance of not believing everything that my mind tells me.”

“Very important,” said Mr Adie. “The other thing is that you have to make efforts, and that is something that you never wish to do. Animate yourself and make efforts. Face it. Try and understand. Think about effort – what it means.”

Perry started objecting, and Mr Adie said: “Wait on. All I asked was what you had received from all of this material you have been given. What you got is the fact that in you there is the power. But you keep telling yourself you haven’t got it.”

“I understand it in movements,” Perry replied.

Mrs Adie agreed: “You are very much helped in movements. You have the music, there is a certain allure which some people feel from the movements. That in itself is interesting. Some people feel it, others dislike them very much.”

“The movement gives you a pattern. What is to be done is much clearer. It is not so much dependent on you as the preparation is, although the real values of the movements is very dependent on you. One part of the initiative comes from somewhere else in the movements, as it were, because we are told what to do.”

“Ponder this situation. Don’t believe what you tell yourself, but you shall have to make a very serious decision not to, because otherwise it will be the same old thing. Try to find something. You don’t really know what your aim is: do you? That is partly the trouble, isn’t it?”

“There is something terribly wooden and obstinate there. It is getting the better of you.”