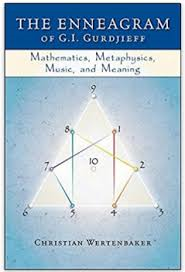 In previous posts I have mentioned the work of Christian Wertenbaker. In this one, I review his book The Enneagram of G.I. Gurdjieff: Mathematics, Metaphysics, Music, and Meaning, published in 2017 by the Codhill Press. It runs to 122 pages plus a glossary and a list of references. The cover is interesting, depicting a triangle on which the nine points of the enneagram are shown with a point in the middle marked “10”. The top of the triangle is point 9, and points 1, 2, 4, 5, 7 and 8 are marked by coloured lines. 1 and 4 are connected by a red line, 4 and 2 by an orange 2 and 8 by a yellow, 8 and 5 by a green, 5 and 7 by a blue, and 7 and 1 by a violet. This ties in with Gurdjieff’s “Colour Spectrum” exercise. If you wish to know more about that, and were not taught it by a pupil of Gurdjieff, it is in my forthcoming book (Gurdjieff: Mysticism, Contemplation, and Exercises, November 2019, Oxford University Press). The outer circle is omitted from the cover illustration, but as said, the point ten is in the middle: two intriguing touches. The book is organised in twenty short chapters, 1 being the introduction and 20 the conclusion. As I have mentioned earlier, the highlight of the volume is, in my opinion, the excerpts of unpublished material from Gurdjieff (the group meetings on pp.85-86 and 109, and the stunning “Moon” lecture on 110-111; and from Jeanne de Salzmann (97). The excerpt “Time is the most important thing next to awareness” is from Orage, as noted by Blanche Grant, and has been published in Gurdjieff’s Emissary in New York, 216-217).

It is not an explanation of the enneagram nor even a historical treatment of the enneagram craze, let alone of Gurdjieff. It is rather an engagement or exploration of the enneagram from several complementary perspectives: the most important of these is probably the psychological, although the mathematics and geometry are more eye-catching. But there is also philosophy and cosmology here. The enneagram, its significance, and its hidden symmetries and curiosities, seems to be its theme, with the chapters developing from more simple and mathematical concepts to the more complex and cosmological. It does not seek to be conclusive and definitive: it is rather a search and an adventure into fields the author finds interesting and provoking, but always relating them to the enneagram and Gurdjieff’s ideas of and for conscious  evolution. That is the book as a whole. If one did not already know something of Gurdjieff, this book would not be the ideal introduction: but if one does, it is quite a useful task to engage with its engagement.

I have previously tried reading books on what is called “sacred geometry” and found them disappointing: they promise a great deal, even a key to the secrets of world order, and deliver very little. It is interesting, but little more, in my opinion, to draw attention to the Fibonacci sequence where it naturally occurs. Where does that leave us? Open-mouthed and gaping? Let us say that there is a golden symmetry to the nautilus shell. I acknowledge that it is beautiful. But then what? What have we gained which simply contemplating this wonderful instance of creation did not itself provide? It is not much, in my view, to simply evoke the reaction of “wow”. This is startling, perhaps, but to what does it lead? What is the practical continuation? What difference does it make to my life? If that is all there is, one might as well watch a modern movie: a form of pseudo-art which seems to rely on special effects, sentimentality, titillation, or a combination of these, and not much else. I absolutely reject a cheap distinction between “practice” and “theory”, at least so far as it relates to the spiritual life: some ideas are of such a level that they spark a sense of the presence of myself. An idea can be such that I become aware of my own existence in front of the reality, a higher reality, of this idea. This is something I often find when I contemplate the Diagram of Everything Living, in In Search of the Miraculous, 322-324.

It has taken me the longest time to come to this: that the distinction between “theoretical” and “practical” can be a false dichotomy in the spiritual realm, and yet that some theory leads nowhere very far advanced. For that longest time, something in me felt abashed before both those sophisticated minds which could understand the sacred geometry which they span out long after I had ceased to be able to follow it, and those austere souls who disdained the ideas which meant so much to me as “mere theory” and even “mental masturbation”. It is not that there is nothing in these critiques, but such phrases can too cheaply be exploited by people who are, in some respects at least, poseurs.

As I see it, in this volume, anyhow, one will find an exploration, and not merely the striking of a pose. I will offer one example, his statement that the enneagram can function, inter alia, as a symbol of three types of time and the three brains. At p.5 he introduces the idea that: “The three parts of the enneagram, the outer circle, the hexagram, and the triangle … represent three dimensions of time … (and) Each of the dimensions of time corresponds to a particular brain of three-brained beings, or one could say that each brain is tuned to a different dimension of time, and this gives us our unique possibilities.” In chapter 10, Wertenbaker expands on this: first he quotes Orage on the passing of the flow of time through each of the three centres, and relates this to Ouspensky’s three dimensions of time: “1) ordinary time, moving steadily from past to future, one second at a time, in which one of many sets of events are actualized each moment; 2) the dimension of ‘eternity,’ in which each moment in a sense exists forever; and 3) “the line of the actualization of all possibilities” (69-70). He then relates each brain to one of these dimensions. I follow his contention that the body moves in ordinary time, and the feelings bring an eternal quality to our consciousness. What I find harder to understand is his view that the mind is related to the third line. He states: “The mind … is free to look forward and backward in time and examine all possibilities …” (70). Is the mind really free to that idea? I am not persuaded. The value of this book, in places like this, is that it raises for pondering a fair and legitimate contention. Relative to the body and the feeling, I think that this is correct. So, I think that Wertenbaker is heading in the right direction. I wonder, however, if he has not drawn his correspondence too tightly?

Similarly, Wertenbaker’s insight that “the three forces may come from different levels, or cosmoses …” (16), is intensely practical: one takes this understanding into contemplation, one has the body in one cosmos, the mind in a higher, and the fine forces to which one opens and seeks to localise and digest, from the highest. Further, I think it is part of the value of the “Four Ideals Exercise” which Gurdjieff brought that he taught a method to “suck into oneself”, blend and metabolize sacred energies which would otherwise not be available.

Note these comments: “Baez … somewhat mysteriously states that 24 is important in the scheme of things simply because it is 6 times 4 (35); see also 90, while I confess I did not understand his meaning at 87-90, 93-95 and 118. If these can be rewritten more clearly …) Then, at 52, Wertenbaker admits that the well-known passage in Miraculous about the incorrect but significant placing of the interval is not clear to him. Incidentally, his exposition of the enneagram at 84 seems to me to indicate that he does have some fair idea of what is meant (even if there is always an irreducible element of mystery). I think myself that the passage in Miraculous possess at least one clear meaning in theory – one must prepare in advance for the interval – the difficulty is to perceive when and how to prepare for the inevitable interval. However, for what it is worth, I think that Gurdjieff’s contemplative exercises provide at least some of the answer: one works on the conscious reception air and higher impressions each morning, to feed and digest the higher hydrogens which will are intelligent enough to take some corresponding action when the interval presents a challenge.

Some miscellaneous points: that “the world as we know it must consist of a mixture of symmetry and broken symmetry” (32) strikes me as important: it may be one aspect of the mystery of aim, and action in pursuit of an aim. The imperfection does not vitiate the aim and its nobility, with this knowledge, it may even validate it.

The fact that one can form the described triads only with three elements (one triad), four (one triad), five (two triads), six (four triads) and seven (seven triads), and never with more than seven (40), may be an objective factor in Gurdjieff’s relating the law of seven to that of three, and saying that the law of three is prior to the law of seven.

I am impressed by the conciseness and apparent completeness of this formulation: “An organism is itself an extremely complex coherent but partially and continually changing vibratory pattern. When a critical amount of coherence is lost, the organism dies” (52). It is such as to bear a higher impression. Almost ditto for this sentence: “The inexorable increase in entropy in the universe claimed by modern physics could be seen as the result of two related deficiencies in its worldview: the virtual exclusion of consciousness and an incomplete understanding of time” (72-73).

I might suggest that at least one example of the “disharmonized sol” (59) can be found in the movement to being-presence in a state of transformed contemplation that is, the movement of the octave turns inwards, hence the need for “absolute quiet”.

I sense a great truth in the concept of “Indra’s net” (75). I have, from time to time, used a similar but less satisfactory image to express an insight.

Wertenbaker’s treatment of the changing of geometric forms mirroring the changing of time (76-77) made me wonder if it was not possible that one value of “sacred geometry” may be to model what can occur in reality, but in abstract, symbolic and hence more comprehensible manner (see also his comments on perspective transformation, 80-82).

Wertenbaker is to be commended for his reading of J.G. Bennett and A.G.E. Blake, whose important bodies of work are too often overlooked (see, e.g. 71 and 85). I may be wrong, but I sense rather than assess that his treatment reacting space to fermions and time to bosons (91-92) may explain, in concrete terms, something of the different cosmoses in the Ray of Creation.

I agree with him that the Pythagorean numbers are “intriguing” (119), but – without meaning this disdainfully or vulgarly – what follows from it?

Although I had to read the book slowly, and even then tired in the last twenty pages, it is, I think I have demonstrated, a worthwhile endeavour to read this book. It sharpens the mind in such a way that at times it touches the feeling – and now this is the final point I wish to make, and it relates to what I said about ideas and theory being practical, or at least having the potential to be so: the feelings which are touched by ideas like the ones in this book are higher and more subtle ideas. One cannot fly too close to them for too long: one must approach, withdraw, digest, approach once more, and so on. That, I think, is another aspect of the pattern of the enneagram: it both conceals and reveals the mystery of recurrence.