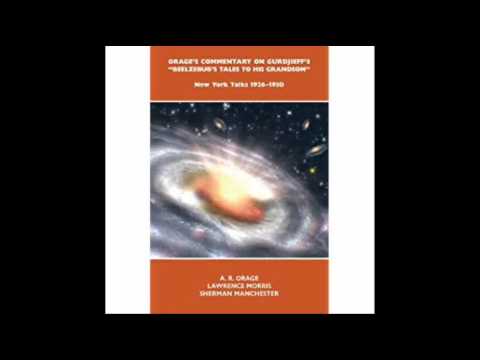 Some of the material in Orage’s Commentaryis quite extraordinary. None of it is bad, but as I say, some of it is rather astounding. That applies to what he says about the organ Kundabuffer. I am sure that anyone who has read All and Everything will also be quite surprised to learn that Orage said that Kundabuffer was implanted in our ancestors by superhuman agencies who altered the atmosphere. On 27 February1927, he said that when Sakaki and his commission realised that humans would eventually realise emotionally our mechanical nature, and that we are without self- or cosmic-consciousness and even its possibility; and that when we did, we might prefer not to live (110-111).

Accordingly, he had the “arch-chemist Looisos” design an organ which would “turn values upside down and provide imaginary pleasures” (111). An organ is, of course, a living member of an organism, working in tandem with other organs and parts of the body, being influenced by the larger organism but also, depending upon the importance of the particular organ, exerting an influence on it, too.

Orage’s’ next paragraph is critical: “The physical analogy (to this story of Sakaki, Looisos and the organ) is with the use especially in the East at certain periods, of opium – or consider the limited amount of electricity in the atmosphere. Its greater mechanical use has allowed less biological use. If will requires electricity, then as the use of electricity increases, will will diminish. Looisos must have done one of two things; either released certain elements in the atmosphere or denuded it of some” (111).

To me, this was truly astounding: Orage states that the fabrication of the organ Kundabuffer depends upon something been done to the atmosphere of the planet. Not only is this not found in All and Everything  as Gurdjieff arranged for it to be published, but Orage’s source can be none other than Gurdjieff himself. That was, I think, part of the reason I found it astonishing: that there were certain important matters deliberately kept out of the book, but which Gurdjieff had imparted at least to some people (we know of Orage, but I would venture to guess that Jeanne de Salzmann must also have learnt much about it, and perhaps the others who worked on the book).

However, the key aspect of this, for me, was that Orage’s statement points to Gurdjieff literally meaning what he says about Kundabuffer and the changes in the atmosphere. Now, this literal truth had always been accepted by a gallery of people who had far more understanding than I: Mr Adie, J.G. Bennett and Annie-Lou Staveley come to mind at once. I had always thought that it might be true but I could not really be sure. Orage’s certainty, with this added detail, make me more sure. I am not a full-on believer, but if Gurdjieff was serious about it, it would be a rash pupil who did seriously entertain it.

Orage continues: “Our Lucifer was a chemist. Superstitious notion of a special organ, all rot. Atmosphere was treated to prevent realisation. We have heard of the separation of the centres, e.g. when taking ether, by drugs, or by such fatigue as induces autointoxication. But all our centres are separated from the other two centres, with which they would be connected if they were normal.

Again, Orage’s perspective is amazing. He proposes that Kundabuffer worked by separating the two higher centres from the five lower. I wonder if it might not even be that the impairment of the connection between the two higher and the five lower caused the disharmonising of the connection between the five lower centres, something like how if the top rungs of a ladder are removed, the entire ladder may fall. That is, the seven centres having been designed to work together, once the connection between any of them was damaged, the organisation of the centres as a whole was likewise damaged. Hence Gurdjieff said that our waking sleep is another aspect of the disconnection of the centres, so that one centre operating alone is hallucination, two working in tandem are semi-hallucination, and only with three is there full waking.

Also, there is contained in this a possible key to the normalisation of the connections between the centres: that we should come to an emotional realisation of things as they are, and an understanding of why we live. Incidentally, note that he here identifies “Looisos” with “our Lucifer.” I hope to return to this in a future post (incidentally, these notes also give evidence of an alternative spelling of “Sakaki”, as “Psycharchy” of Soul-Rule or Soul-Ruler. If this is consistent with Gurdjieff’s intention, then some of his neologisms are based on sound, the homophone principle.)

Later in the same evening, the idea of Kundabuffer as a disease was again noted: “Buddha had realised that all humanity suffers from a planetary disease and called it Kundabuffer. (Buffer mans “reflection”, see life as it is in the water, upside down). … with the sinking of Atlantis the need for Kundabuffer was gone”(146). He then makes the intriguing statement that our present system of education is based on conditions which were “based on Kundabuffer”, so that we have “an education based on a state of things which no longer exists” (146).

Again, there is a possible key to righting education here. But let us move on. Orage said, on 21 April 1928, that: “Kundabuffer has left is properties in the very air we breathe and in our very bodies – this we are never essential” (308).

Why is none of this to be found in Gurdjieff’s expositions, as reported in In Search of the Miraculous? Did Gurdjieff not then have these ideas? That seems unlikely: they are, after all, intimately related to some of his most fundamental concepts, such as sleep and awakening.

No, it strikes me that there is something quite significant here, that when he was writing All and Everything  he had already decided to take his system so far into a different direction. There was continuity, of course, but also development. It is hard to find quite the right word for it. Certainly there is a more religious atmosphere, with the angels and the more concrete concept of His Endlessness, who seems to replace the formless and abstract “Absolute” of the Russian days. But this does not really correspond: there is something more than religious. Is “spiritual” the right word? I need to ponder it, but I do have a sense that it may be related to his use of contemplative exercises, especially such as the Four Ideals and the various forms of the Lord Have Mercy, and the use of the last phrase in the latter series of movements.

I think that Gurdjieff tried to bring one particular type of system, but he found it didn’t produce the results he had hoped for. He therefore tried another method. The hard thing is to have an overview of Gurdjieff’s work, methods and ideas as a whole, which does justice to all aspects and periods of his life, not least that period in the 1930s when it all seemed to run downhill. I have made an attempt at this in my forthcoming volume, which is – to my mind – good so far as it goes. But this material about Kundabuffer in Orage, which I had read but not digested when the book was completed, may, when it is understood better, help me further along.