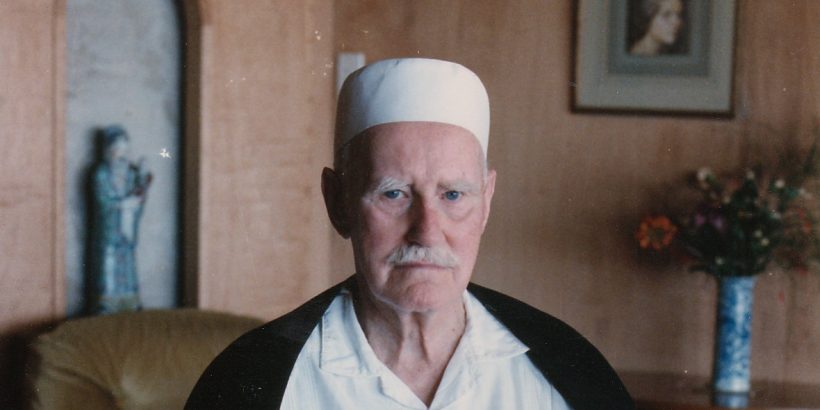 After what Mr Adie said about All and Everything, he continued with the morning address. He said: “Yesterday we worked. We tried to become more knowledgeable about our own image. We have an image. We project an image. People see us. They don’t see the real us: they seem some meat and bones walking. We may seem to be more or less forgetting, or lost in dreams, and they see that.

What sort of an image does the person they see have? Do we have any image at all, or are there only dreams?

And the more we really try and observe as we work, and to receive more impressions more centrally, and so to expand our sight, it gives us more than just one little line of vision. Our ordinary line of vision is narrow, it is as if we were looking through a key-hole. It enables us to go into the room and move around the objects in the room. The objects could look very sinister through the key-hole, but if we can enter the room we may see them as they are, and start to exercise some responsibility over them.

I don’t imagine I have wings really. I behave as if I do, but I don’t really see that. So how do I see myself? What is that image? Just a sort of dreamy thing that drops the knife or breaks the bowl or smashes the tool?

We tried to come close to that, to see the image, and I think what was said at meal times showed it a bit. Who was here yesterday? Don’t you think that showed a bit in the comments? People had seen something. Of course, they didn’t say: “I saw my image”, but what was seen had a certain reality to it. It really more or less happened for them, so they must have seen their image. Because, how do I see myself otherwise? How?

I see an image: this “seeing” includes feeling and sensing and so on. See your posture, Harry. Just don’t move. You see your right leg tucked back? Your left leg pushed forward, your head slightly on one side? You are beginning to sense your posture, now that I have pointed it out. You agree? Good. (Mr Adie had spotted how Harry was sitting).

I don’t really see myself in general. But I need to. I need to see that expression.

In life, why does it happen that people get annoyed when I speak to them? Surely it is very often because they see on my face something that I don’t know. If I can do the work economically, and not waste that energy, I might be able to see. We also had the aim to try and approach the stops with an acceptable image of ourselves if I am going to exchange. And I wish my image to be acceptable. That is different from considering. I must open to see. If I have been working, then it should be acceptable (to be open). I must be very interested to understand that, because there is such a thing as inner considering, and that I don’t want. And for that, I need external considering. I can’t open myself to a person without considering them, but it wants to be external considering.

I think part of the reason we find it so hard to see our self-image may be that we are looking with the lower part of the mind, the formatory apparatus, which expects to see my own self-image the way it sees the trees. Rather, I think it is the higher part of the end and of the feeling which can perceive it, and only them, and we are too unused to their perceptions to recognise them when they come. It is worse: something in us is actually looking in the other direction and so positively misses those finer impressions, those finer and possible insights.

This was the first question after lunch. Pablo, a doctor spoke. He said that he had decided to stop every five minutes and move his little finger, and ask himself, what is my self-image? His concerns about the job next year are tied up with his self-image, but when he asks what his self-image is, there is only a vacuum. He still doesn’t have the answer to the question: what is my self-image? Nothing comes relating to the work, only to the hospital.

“Yes, but a lot of that is false personality,” said Mr Adie. “It is very difficult. I am not sure that you picture yourself flying up and down the corridors, and talking to patients. Does much of that really go on in your mind?  You say that much of your mechanical thought relates to that, but I don’t think you have really seen an image of yourself yet. Do you think you have?”

“No,” replied Pablo. “The recurring thought is related to the job I am applying for, for next year. I wanted to make it go away, so I tried to sense my little finger, but it kept coming back all morning.”

“The idea of sensing your little finger is good, but I think you also need to ponder this matter. You don’t want to be plagued night and day with this concern. If you really looked at it for half an hour, and logically worked through the facts, you might go as far as you can. You can never see what is going to happen. But in any case, is this really the whole of the world for you? Maybe you will see that it isn’t. Really try and face it with the material you possess, the thought that you had. If you do, I am sure you will feel some relief, some enlightenment. If you give up and go away from it, and in doing so you go away to dreams, then you have just handed yourself over. But if you can confront it, you might get a glimpse of something.”

“There was a miser, he was very fond of his gold, and he buried some of it in a hole in the earth. When he died, he came back as a little mouse that ran around the buried gold. That is all he was: a mouse that was attached to some gold. What was its real value? I am not disparaging all the prospects you have in view, but there may be a very heavy cost associated with it, if you are not careful.”

“Ponder it. “I see. Now that might happen.” Turn and face it. Surely you would give some sort of value to just being a human being? No? Otherwise the sun could shine in your room, and you would not have noticed it, all sorts of life, touching contacts and things, but you don’t notice them.”

Pablo replied that it only began today. It hasn’t been like this all week.

“Maybe not, but maybe you just haven’t seen it. You don’t think we save it up for you and release it when you come?”

“I rather think you bring it with you. But when you come you see it, you begin to see it. There is no dodging it, which is the tendency of your last comment. You really have a bit of work there, and you need to do it. When you take a fellow with chronic chest trouble, if he doesn’t do his breathing exercises, what happens?”

“There is no substitute. You have to do your breathing exercises. Pretend you’re a doctor.”