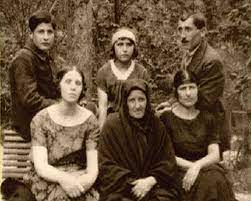 My academic article on Gurdjieff’s most unusual exercise, that of “Help for the Deceased” is being published, this week, by the Alternative Spirituality and Religion and Review. I open with a short summary of Gurdjieff’s life and ideas, simply as background for the main thrust of the article. I have been developing my ideas about Gurdjieff’s career. Three of these are mentioned for context. First, as I explain, it seems to me that, in the Russian years, Gurdjieff was teaching the ideas as a preparation for the practices; but by the 1940s in Paris, he was teaching the practices as a preparation for grasping the ideas. Second, it is tolerably clear that he had the transcripts made in order to have a record of not just his teaching at this time, but more precisely of his exercises. Gurdjieff knew their importance, and he wanted them used (in one 1944 transcript he says that he was thinking of inserting material from the groups into the Third Series). Third, he was developing his ideas and practices right  up until 1947, if not to the day of his death. These practices have a certain initiatic ritual, and most of them depended on Gurdjieff himself.

Now for the exercise. I marshal all the available sources, to examine the various exercises he gave for helping the deceased (sic). The key source was generously made available to me by Professor Paul Beekman Taylor. It comprises notes of the late Donald Whitcomb (1900-1976). If anyone has any information about him over and above that recorded in Prof. Taylor’s books, including anything he may have said about his inner work, or any photographs (I know of the one in Dushka’s book, but a good copy would be appreciated), please let me know.

There is also important material in J.G. Bennett’s Witness, Kathryn Hulme’s Undiscovered Country, and the Paris transcripts. I set it all out and comment on it. I use the material in In Search of the Miraculous to try and piece together the principles. I venture the opinion that at the beginning of his career, Gurdjieff taught the principles of these exercises, while at the end, he taught the exercises but said less about the principles. Perhaps, I conjecture, he intended his pupils to put them together.

But what are these exercises? They are exercises to put people in contact with each other via means we might consider paranormal if not supernatural. This contact was such that one person could help another. In one exercise, it seems Gurdjieff would help the living recover from illnesses. We know so little more of those that we might as well say we know nothing. But some were to put a living person (e.g. Donald Whitcomb) in a position where he could help his deceased father. That is the one which interests me the most. However, in the 1940s, he taught his Paris pupils, and later Whitcomb, Bennett, and Hulme, a means of making contact with Gurdjieff’s deceased mother, and with their departed parent, and she would help them. One important qualification is that when Gurdjieff taught Hulme this exercise, it seems her mother was alive.

I think that we cannot do this exercise just as it was given with his mother. Certainly, I have not attempted it and could not imagine the circumstances which could induce me to. But the principles, especially those concerning contact with the aid of something which had belonged to and been touched by someone are most interesting, and what he said to Whitcomb in 1939 may provide a clue.

Finally, I tried to find parallels. There is some fascinating material about the “psychopomp” or spirit guide, but I can find no real parallel. For example, the academic reviewers thought of Catholic prayers for the deceased in Purgatory. But while the Catholic tradition has the angels act as equivalents to the psychopomp, there is nothing comparable for the “help to the deceased.” Catholics pray to God to have mercy on them, we do not try to send energy to any human being, alive or dead.

If you wish to read the article, then it may help you to know that on 9 September the journal advised me: “your article will be uploaded to our Online First site within the next five days. The full article will be available to subscribers, and everyone will have access for free previews and searches. Subscribers can see your article here: http://www.pdcnet.org/asrr/onlinefirst.

The posted article will have an active DOI. After the issue is completed, the same DOI will automatically point to the finalized version on our website.”

If anyone has more information, about this or similar practices, I would be most grateful.