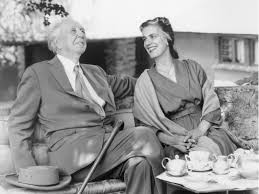 From Crna Cora to Taliesin, Black Mountain to Shining Brow, The Life of Olgivanna Lloyd Wright, compiled and edited by Maxine Fawcett-Yeske and Bruce Brooks Pfeiffer, ORO Editions, 2017 (no place of publication shown, 291 pages, many illustrations, both colour and b&w).

This is a valuable book for those interested in Gurdjieff’s ideas and methods (his “system,” bit not a closed system). The value is Olgivanna’s autobiography: I do not share the editors’ ideas on Gurdjieff (e.g. note 16 on p.39).

For those who have not heard of Olgivanna Lloyd Wright (1898-1985), or know little about her, this book will serve as a welcome introduction. She was born in Montenegro, the daughter of the first Chief Justice of that country. She married, had a child (Svetlana), and after the birth of Svetlana, separated from her husband for the first time, and later, in about 1920, met Gurdjieff. She remained with him until, after his car accident of 1924, he sent her to the USA, to where her husband had moved. She had clearly received a tremendous deal from him before she left. In the USA she finally split from her first husband, but married the famed architect Frank Lloyd Wright (1867-1959). After his death, she remained to lead the Taliesin Fellowship, which Wright and she had founded.

For me, there are two invaluable matters in this volume: what Gurdjieff shows her about the exercises, and what she learnt about higher energies. First, one quote astounded, delighted, and enlightened me. In Constantinople and therefore in 1920 or 1921, Gurdjieff said to her:

“It is good to go to church because the building is filled with pure emanations. Open your circle then let them penetrate into your atmosphere: be completely relaxed; stay within yourself and receive. You will be purified by the inflow of vibrations of higher materiality. There is necessity for you to learn to pray again as you did in your childhood. You are very religious by nature” (39).

She practised this exercise in Hagia Sophia and, I think, Notre Dame in Paris (39 and 67). Now, not everyone is “very religious” by nature, but if I can revise my book for a second edition, this passage must be quoted and woven into the interpretation of the Four Ideals Exercise. It also complements the advice Gurdjieff had just given her. When Olgivanna told Gurdjieff that when she looked at distant mountains, she felt drawn out of herself towards and beyond them. Although they were walking together, Gurdjieff came to a complete stop and said:

“Never allow that, it is bad for you. Every time it happens draw yourself back in. You must learn to isolate yourself from such influences” (39).

Again, this surely applies to us, and in more than one situation. On the same page, Gurdjieff told her that “our aim” is immortality. But, he said, as he was to later say about aim, “we must cross over (many) bridges. And for that crossing we must (be) prepared; we must get proper clothes for various kinds of weather. You must have one type of lantern and another type of lantern for another. One is longer, another shorter, one wide, another narrow. Some of them we will cross together; others you will have to cross alone” (39). This is even fuller and more informative than the analogy he gave of making your way to him, lamp-post by lamp-post. It also explains a good deal about his teaching, and why it has so many ideas, so many movements, so many exercises. And what it says about the teacher-pupil relationship can possibly not be put in any better picture.

In Constantinople he taught her “inner exercises” which she promised never to disclose (42). I only wish I knew whether by this phrase she meant “inner exercises” as I have defined them, because if she did, then my thesis that Gurdjieff only began teaching them in the mid- to late-1930s has to be amended. The entirety of his advice to her at this point would be well worth repeating, but in re-reading the book for this review, I now see the fuller significance of her earlier comments about a “Great Presence,” and about Gurdjieff’s presence, and his wife. That is, I think the entire section needs to be read in context, and to imaginatively follow its development with the author.

The second key matter concerns energies. I had already deduced from what she wrote about some work Gurdjieff had made her do, some “super efforts,” that he had put her into contact with the Great Accumulator. So imagine my delight to then encounter this, describing her reflections in the USA:

I had achieved knowledge of music, of the Movements, of dance; I had worked hard, connecting with a different kind of generator within myself which not many are aware that they possess except by way of what is called a “second wind” and with no knowledge of how it works. One actually plugs oneself to a second generator more powerful than that which works for us in our daily chores (67).

There is much more which would be most valuable to Gurdjieff’s students of the second, third, or later generation. But I wish to point out the value of this volume for three other matters: first, what it shows us about Olgivanna’s life. I think that little which has been written of her is quite unbalanced. When one reads her vivid accounts of her father and mother, both remarkable people in their own way, one begins to develop an empathy for her. I rather suspect that if her critics had read this book with any feeling, they could not have written as they did. And this makes me wonder if this principle is not of more general application.

Second, I have never been a big fan of Frank Lloyd Wright’s architecture, and still am not, but I have begun to see that this may be due to something which has been lacking in my education, and is presently lacking in my feeling. As for Wright himself, I had always sensed that there was something great about him. I later learnt that Gurdjieff himself came to have this opinion. And this book crystallised that for me: the anecdote about him and Mme de Salzmann brought this out well (226).

Third, and finally, one receives some strong impressions from the photographs of her. I have always liked her book The Struggle Within, and this volume sent me back to it. Yes, there are uneven patches in it, but I recognise in its ideas the strong and beautiful woman we see in this volume. What is needed now is an edited illustrated reissue of The Struggle Within. If any publisher wants to get to work on it, I will help.

That reissue of Struggle Within should also have an index. For this book, From Crna Cora to Taliesin, an index and a list of illustrations (not just credits) would have been great. I say this because I consider the book’s contents to be valuable: it is not some trivial collection of stream-of-consciousness diary entries. Maybe the editors had no choice. But there is still a gap.