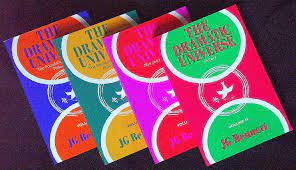 I have now completed my first reading of volume 2 of the Dramatic Universe. As with volume 1, I am quite certain I have only engaged with it superficially, and that a deeper reading would be rewarding. I am also reinforced in my view that what Bennett is doing is painting the picture of world-creation and world-maintenance, such that we better see what our position is, what it could be, and how we can realise our potential.

It is subtitled “The Foundations of Moral Philosophy,” and appeared in 1961, although he states, in the dedication to his late wife Winifred, that he first “outlined the themes of this work” between 1920 and 1950. He does give some of the details of this in Witness.

If I read this volume correctly, he begins by restating many of the key ideas from volume 1, but more clearly, more precisely. This can only mean, I suggest, that even Bennett himself needed time to digest the ideas he had adumbrated in volume 1, to be able to assimilate them and express them more simply.

He then follows that thought through many roads until he arrives at the climax of this volume which is, I suspect, figure 35.2 on p.294 of my edition. He writes: “the following table (sets down) the categories, potencies, and energies … in parallel with the essence-classes.”

In a footnote, he states that this table is much informed by Gurdjieff’s teaching especially in the Diagram of Everything Living and the Food Diagram. It is honourable to candidly acknowledge our debts.

I cannot set out the entire table here, but let us take “Category of Experience” number 8, which is “Individuality.” Its “Level of Potency” is realised in “Man,” his distinctive quality of energy is “Sensitive,” and his “Essence Class” is “Men.” Now, if we follow the qualities of energy above Man, we have “Conscious,” “Creative,” “Unitive,” and “Transcendent.” I wonder if this is not related to the degrees of reason in All and Everything. It seems to sketch the ladder which Man may climb.

Beneath that level, the qualities are energy are “Automatic,” which is distinctive of the Essence-Class “Animals,” and so on. So, if I read this aright, we can infer that our proper energy is the sensitive, but when we “fall,” so to speak, we are merely using automatic energy, while when we “rise,” we are using conscious energy.

Those who have read Making a New World, and some of Bennett’s  books, edited and published posthumously by Bennett’s pupils will recognise the ideas. Well, in this volume the basis of the ideas are worked out. Yet, ideas like this cannot every be fully worked out, at least not in every detail; often one works back from an insight. Hence, Bennett writes that in developing his scheme, he will make assertions about matters which are beyond Existence, and such dogmatic pronouncements might well be met with a demand for his authority to so speak. His reply is: “no authority is involved or implied. We are following a method which uses whatever instruments may be available. … nor does it imply any authority beyond that of ‘seeing for oneself’.” (263). This, I think is critical, and explains I suggest, Gurdjieff’s assertions, especially to Ouspensky: he was describing what he had seen, and the “explanations” are often an attempt to make sense of that vision.

What Bennett says about these higher dimensions, life, and themes such as Man Created in the Image of God, and Omnipotence, deserves a separate and fuller study. Although they are the crowning glory of this volume, they are too large and too important to be summarised within a thousand word review.

But I can cover how in the Author’s Note, he explains that the Dramatic Universe was first planned as a theoretical harmonisation of “the two great Domains of Fact and Value (ix).” This relates to many questions, e.g. Stephen Jay Gould’s idea of “Nonoverlapping Magisteria” of Science and Religion (Rocks of Ages), and the basis of human ethics. This was quite an undertaking, but it developed into “a search for the meaning and purpose of man’s life on the earth” (ix). Looking back on volume 1, he now saw one of its main “innovations” to be “the replacement of the Cartesian dualism of matter and mind by the triad, Function, Being, Will, as the basic elements of all experience” (ix).

Interestingly, Bennett notes that the appearance of this volume was delayed some three years by his engagement with Subud, and that this episode led to a better understanding, which is reflected in this volume (ix-x). This is significant: the way I see it now, part of the value of Bennett’s enthusiasm for Subud was not only in what he acquired from it, but also in his seeing that what he could receive from it was limited, and that to see more, he himself had to become more – to develop his own individual contribution.

The book is replete with insights. For example, to those who cannot understand the value of such an endeavour, he points out, I think correctly, that “every attempt to understand the universe” has in common the “intuition … that there must be some universal power that drives Existence to seek its own fulfilment. … The most uncompromising materialism … is compelled to invoke some universal principle, if only that of rigorous causality” (86).

As a budding Bennett-biographer, I was entranced by his statement about how, when he was a young child “almost too young for speech,” he saw a Pietà of Michelangelo in Italy, revisited it at age 15, and  subsequently over nearly 60 years. From the first, he appreciated in it “a timeless quality” which had since then deepened into a sympathy for the “value-experience” which led Michelangelo to “religious contemplation in his later years.” More, these viewings “contributed to the formation in early youth of the conviction that there is an invisible reality that cannot be held within the limits of time and space” (41-42).

And that conviction led, through many years and experiences, to this remarkable volume.