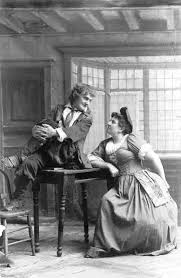 Of all the concepts Gurdjieff brought, that of “playing a role” is one of the hardest to get a practical handle on: or so I have found. But this exchange with Mr Adie on Tuesday 1 April 1986 at Newport gave me a clue. I shall return to that later.

A young man said that he was required to play a role when he’s at the office, but that the role in question has very little in common with him.

“Or it may be that you have more in common with it than you realise,” replied Adie.

The chap did not even stop to ponder what Mr Adie could have meant. He protested that the more “inner work” he did, the more the resistance he felt to playing that role.

“Half a moment,” Adie interrupted. “But you don’t play that role. That role is played on you. You don’t play that role, don’t worry. You have no choice. You’re not there. So now, just rephrase it a little bit: what exactly do you mean? What you said wasn’t quite right. What do you find hard?”

“I am less inclined to be that person which I am expected to be.”

“But I don’t know that you are: this is your idea of what you’re expected to be. Can you describe this role? An office manager whose task it is to help people, and show them what to do? Is this the function?”

“Well you’ve got to play that role if they’re to pay you. Isn’t that right?”

“But that isn’t what you’re talking about, is it? Don’t you mean to refer to a certain falsity about the whole thing?”

“This role of the helpful office manager is a role that you could play, and that is just what you have to do. But you don’t. Rather, it simply takes over, which makes all the difference in the world. You have a conception of what is required – not you but around about you – and this goes automatically.”

“I find that a lot of it is based on false personalities,” said the man, again protesting, but this time more weakly.

“Yes, because connected with that role is your vanity, and your demand, and your considering. That is all mixed up with it. So the role, the real role, is lost in a muddle of considering. Well, if you have a wish not to go on with that, that would be quite right.”

“But to play a role is just what we need – to play a role and not to identify. We think we play the role, but we don’t. In order to play the role, I have not to be identified. The role will depend upon all sorts of external things, many accidental, which actually take place. But, with my identification, I don’t see that at all. I project a whole other world of people criticising, and fears. Yet it is not justified. So I don’t play that role, rather, the wrong role is played on me.”

“So first of all I need to be able to refrain from that, and then with knowledge of what is required, to behave as my reason tells me. That is playing a role. Is that much clearer?”

“So what will your aim be in the future?”

“Not too quickly,” cautioned Adie. “First of all you have to now be there, to see all the tricks and falsity of the way that role dominates you: to see it and understand it. By being present, that will gradually become passive, and then you’ll be able to play the role, which is doing the job for which you are being paid.”

“Are you clear? There is an awful lot of work to be done in such a situation. Someone earlier tonight brought one thing: it opened up a whole avenue of work. You bring another: that opens up another avenue. So the work isn’t impossible: it is difficult, but it is possible. Mr Ouspensky called his book The Psychology of Man’s Possible Evolution. Possible.”

Transcribing this made me reflect: have I ever taken this instruction seriously? And then I saw that I take it as an instruction rather than as a teaching which could help me, even be medicinal, if only I would accept it. “Suggestion” is too weak. It is more than that: it is teaching that if I want X then the road lies through Y.

And that led me then to sit down and write a list of eight qualities which relate to the role I am required to play. At first, I had a sort of idea it might prove impossible. But very soon, very soon indeed, the first word came, and then six more followed. I had to stop for a moment, waiting for the eighth to appear, and when it did, I was glad it had. I feel that it has given me something of lasting value. I won’t share the full list, after all, each of us who wishes to attain the aim has to do that work for himself, but I will say that the eighth attribute was impartiality.

Finally, let me copy and paste here what I see as being the practical heart of Mr Adie’s extraordinarily intelligent answer: “ … first of all I need to be able to refrain from that, and then with knowledge of what is required, to behave as my reason tells me.”