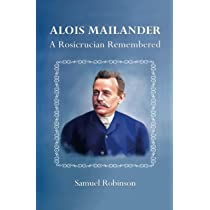 This is a good and interesting volume. I had not ever heard of Mailander, but a friend recommended it, and I have long felt that there was more happening in Western Esotericism than we have heard, and I was open to an exploration of hitherto-hidden avenues. So, I trepiditously ordered in the volume, with mixed feelings of hope and fear of disappointment. As it happens, I have been favourably impressed by much of the volume, especially Robinson’s scholarship. He has done us a favour by taking the trouble to plough through old German manuscripts: the sort of diligence which always impresses. He has also translated all German phrases, something which, although it seems obvious, is often overlooked.

First, Mailander was clearly an impressive person. It would have been better, in my opinion, if Robinson had opened with a short biographical sketch: A.M. was born on this date in this place; he died on that date in such a place. The main features of his personal life were X., and of his spiritual life and teaching, Y. It is a shame to work as diligently as Robinson does, and not to distill the essence of the honey into a few drops, and thus to orient the reader. In fact, the learned author several times assumes that we know all he knows about his subject and the background. That is, I suggest, a fault, albeit one which the learned often make. He also makes reference to people like Jane Lead who turn out to have once been reasonably well-known. A note on these would have helped.

Second, the value of this book is entirely independent of what I might call “Rosicrucian” studies. Robinson shows that this German “Rosicrucian” movement, although modest in size, possessed some intriguing ideas which go far beyond what I have otherwise seen. Not the least of these was the realisation that the spiritual and the physical bodies are closely related, and that the spiritual life can, so to speak, permeate the physical. Mailander even said that we need to experience in our bodies events such as the foot-washing, Last Supper, and the crucifixion (82). This is not the same as needing conscious sensation in order to be psychically balanced: it is rather more like Ignatius of Loyala’s “spiritual exercises.” Like Ouspensky, I think they are exactly what we do not need. I consider these to be lopsidedly fantastic rather than spiritual, and daydreaming rather than exercises. Also, there is a bizarre idea of having signs imprinted on one’s skin and “crucifixion pains in the left foot” (pp.84-86). I am afraid I cannot follow Mailander there, yet he was quite serious about it.

However, I wish to be quite clear: I am sure that although he had some eccentricities, Mainlander was a pioneer of the importance of the body in the spiritual life. Some people today are interested in the “theology of the body.” I think that Mailander was ahead of them. This book is, in my opinion, more valuable than the lengthy tomes of “Theology of the Body,” which I have seen,

Another strength is the perception that as we are, we do not possess the individuality proper to a person on the spiritual path. These insights are united in the report of Mailander’s teaching at pp.118-122. We even find this surprising assertion: “It is a matter of forming a sun, an “I”, which enlightens your entire being. In it you will see past, present and future. So your life is opened up and the new heaven opened” (120). This is rather dramatic, but two questions arise for me: how is this to be done, and does not the extravagance of the promise show that this is poetry rather than practical mysticism?

Although he taught a method (pp.76-80), I am doubtful that Mailander had found a way which could be passed on the way that one of the great mystical traditions can be passed on. But I do suspect that Mailander was delivered somewhere further along the way. I wonder if something like this did not happen to Krishnamurti. At some point, perhaps after a sickness, a person finds that when restored to health, they are in a different place. They do not know quite how they got there. In Krishnamurti’s case, he seems to have believed that there was in fact no “getting there,” no “path.” But I do not think that is right: they have generalised from their own experience, in a manner I consider ill-founded, and ultimately illegitimate.

This does not mean that such people cannot be inspiring and encouraging, and sometimes supply so much confidence, perhaps even arousing faith, that a person can surmount a difficult period in his life, and even make a substantial advance. But it is the difference between being given some fruit or grain and knowing how to farm your land. Mailander and people around him could attribute his gifts only to divine action: hence the idea that St John was speaking through him, and the mania for finding the “return” of Biblical prophets like Daniel in modern teachers (pp.60 and 97). Mailander did bring some striking ideas, despite his lack of a higher education, and Robinson presents these in the second half of the book. Some of these can touch the feeling, but others seem to be to be arbitrary, like the idea of three baptisms.

This book shows that there can have been circles and groups in Western Esotericism which have not come to notice. Robinson is continuing his research, and this could be more significant: not only may he present other perhaps more important figures to the English-language world (like Kerning), but also help us better place Mailander in his contemporary society (e.g. the critique of Theosophy he makes is interesting, yet he himself joined T.S., pp.69-71)

In conclusion, I suspect that the significance of this volume will only appear in full sight when we see the balance of Robinson’s work. His research is excellent, and the material is intrinsically interesting. His weakness is in the order in which he presents his material, but this is only a minor hindrance. I am looking forward to seeing where the author goes, and in particular, learning more about Kerning.