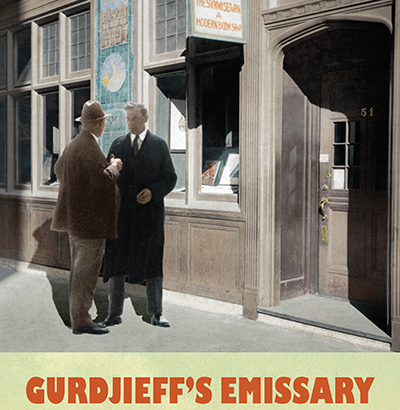 The cover depicts Gurdjieff and Orage in earnest conversation outside The Sunwise Turn Bookshop in New York. It is almost surrealist. Is it a retouched photograph, I wondered? No, but it took the editors a year to get it right, and right it is, even from the fall of the two men’s shadows onto the pavement and store front. It is the most striking book cover I have yet seen, and this volume is the most significant I have read for time out of mind. And I have barely skimmed the surface.

At 630 pages including the index, some 247,000 words, one and a half inches thick, with around 130 illustrations and 37 photos, it is no slight achievement. Drawn from diverse manuscripts and notes it rarely indicates which extract is drawn from which source. That is disappointing. But the material is extraordinary: only, one needs discretion in reading, because the notes are not always clear, and rash interpretation could easily prove to be misinterpretation.

I shall deal but swiftly with the little I have read. Three passages have particular struck me, just within the first twenty pages.

First, the reported notes of what Orage said about attitudes on p. 17, opened a new perspective for me. What Ouspensky had to say in The Fourth Way, was important enough. But this adds to it a practical dimension: attitudes consist, these notes say, in mental images which “induce corresponding emotions”, and these cause actions. Pondering this has enabled me to isolate, and so see clearly, mental images which had been mixed up with many other things. Note: he is not speaking about words or mental formulations, but about mental images. I shall not go into the balance of what is said in this short paragraph, except to say that it is worth making your own.

Second, what Orage is remembered as having said about the miracles of the feeding of the crowds is that they mean: “the scientific use of all the energies of food and of all foods” (p. 13). To me, this was illuminating, because Orage’s method of reading the Gospels is not simply symbolic or allegorical. Rather, it is typological, because it is saying that the foods Jesus referred to are all foods, all energies. Typology is barely understood today. Typology transmutes the earthly vision into the divine (to the limited extent possible for us). In Orage’s reading, the words of the Gospels are not just reinterpreted but transmuted into another discourse, one begun or recommenced in this age by Gurdjieff.

Third, there is one of Orage’s suggestions: “Try to make every little episode in your daily life meaningful. Always have a reason if you are walking on one side of a street and if someone should tap you on the shoulder and ask why you are walking on this side of the street, you should be able to give a reason for it” (p. 12).

Before leaving this part, I shall just give one example of Orage’s ability to state the concepts he had taken from Gurdjieff in simple and powerful language: “All living forms are screens through which energy passes” (p. 17)

Orage’s stature as a thinker, and as someone who actually was able to take Gurdjieff’s methods and ideas, and develop them, is not in doubt. The great mystery is why Orage was dissatisfied with Gurdjieff. Paul Beekman Taylor’s books don’t really explain to me either the break or the dissatisfaction.

I would not question Orage’s breaking with Gurdjieff, if it were taken by itself. After all, Gurdjieff could have engineered it for some purpose. But I can understand neither what Orage felt that he lacked, nor Gurdjieff’s role in leaving him lacking. Did Orage have everything he needed? Was he merely failing to avail himself of what Gurdjieff had shown?

The almost astounding quality of these notes only adds to the mystery for me. Because if this is insufficient, or if this man was not ready for what he needed, when would anyone be ready?

I have read some unpublished notes of a conversation with Jeanne de Salzmann in which she says that Orage had not understood enough before he began his groups, and had made up his own exercises. She states that she overheard the famous telephone conversation between Gurdjieff and Orage, and that when Orage asked Gurdjieff if he could attend the meeting, Gurdjieff replied: “Come Orage, come.” Orage’s decision, according to Madame, was more to return to life.

I am in no position to contradict her: but Orage’s understanding was astonishing. If the suggestion from p. 12 quoted above is an example of Orage making up his own exercises, then it is a good thing that he did. If he ran into problems, what hope was there for anyone else using Gurdjieff’s teaching? If Orage did not understand sufficient, then the human position would be hopeless, if we are speaking about the Fourth Way as a path to consciousness. This would mean, by exclusion, that a religious way is necessary, and that Fourth Way is an aide to such a path.

The more I see of life, the more I believe that this may be true. Many people following the religious path can go no further than a certain point. I am sure that in many cases Gurdjieff’s teaching could help them better understand their own religion and move beyond that point. Likewise, many in the groups are in the same dilemma. Religion could help them better formulate their aim and the importance of their behaviour: there is a tendency in the Gurdjieff groups for people to imagine that they are “beyond good and evil”, as it were. This of course, leads to putting conscience to sleep.

Now, after Orage’s departure, Gurdjieff began teaching the Preparation and the exercises. Would these have made a difference? Perhaps. But I am reminded of what Mr Adie once said to me about Ouspensky: one can be too harsh on him, Adie said, for it could be that Gurdjieff had made a mistake with him. Pondering it, I wonder if, especially until the 1940s, Gurdjieff did not find it harder for himself to deal with males than with females? Was he too hard on men until the very end of his life?

Whether one thinks there is anything in these speculations or not, this volume is extraordinary.