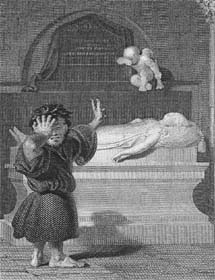 “… fair play and auld (old) Scotland for ever!”

The issue at the heart of The Black Dwarf is that of suffering in that word’s strong, original sense of “being able to bear hardship and pain”. The Dwarf himself and his condition is a metaphor of Scott himself and his limp, albeit an exaggerated one. It is set right on the borders of geography (the remote Scottish moors directly north of England) and of history alike (the people are turbulent because the Jacobite cause has been defeated, but there are new hopes to revive it and to conquer). It is perhaps no accident that many of the most important moments take place as evening sets, and the grand finale, an intended wedding, takes place in a crypt.

While some critics maintain that the whole world has always depreciated the Dwarf, that is simply not true. Although The Black Dwarf is today considered to have been something of a failure, when Walter Scott published it in 1816 it was seen as a good tale with some defects in the telling. I would say that that assessment is fair. Scott himself wrote an anonymous review stating that it had structural flaws. It is not a well-crafted novel, but it is a good read, and many of its pages are brilliant, and not a few of its lines are dashing, such as the one at the head of this essay. Before turning to the novel itself, perhaps Scott’s shortest, preparing this review has helped me clarify my views on literature. Let me set out some of these first.

Novels are an imaginative exercise, and can enter the reader’s mind and hold there an imaginative sway. That power should be used for good. What human power should not? The amoralism or even immoralism of the “artist” is itself an ethical teaching, and a maleficent one. By saying that ethics have no place in art, the artist makes a statement about the limits of ethics.

One might even say that all of culture involves an influence on the mind of each individual. Even if an idea is rejected, it can still exert an influence. For example, it happens that a person sees an image of violence and is struck by it. I have known people who have feared that they might possess within themselves the capacity to perform such atrocities in a moment of madness. So far as I have been able to discern, this very real anxiety has been based upon nothing but the image being in their heads. And I will refrain from mentioning the noxious obsessions which have taken hold of people as a result of viewing pornography.

It seems to me that each trend has had certain blind spots when it comes to art, not excepting the novel. First of all, the various “schools” of art and culture can be typified by what they exclude and are incapable of, as much if not even more than by what they include. For example, many modern schools of art exclude classicism. Many theories of writing exclude an orderly and sequential development.

At the time Scott was writing, there was no lack of awareness of the need for a good novel to be instructive, especially as regards virtue and vice. This did not mean that the novel had to be a sermon, quite the opposite. It was understood that the novel was not and could not be a novel, and that it would make its points and educate its readers indirectly and by engaging their feelings. This understanding has been lost, if not actually refused today, and I think that today’s literature is immeasurably the poorer for it. At least since the 1960s, writers have basically lost any sense of the ethical and even spiritual possibilities of the novel, even, perhaps especially, if they deal with spiritual topics.

Scott did not labour under this delusion. But he did sometimes construct his novels poorly, at times intensely hurling us onward in a storm of action, at others, lingering for no apparent purpose over trivialities. He sometimes made his characters act in ways which seem inconsistent with his earlier descriptions of them, straining the suspension of disbelief too far: I would hold up The Pirate as perhaps the prime example of both these faults. But neither is the Black Dwarf free of them.

The first thing to remember about this novel is that Scott was still under the influence of Shakespeare. This particular story is much indebted to Timon of Athens, not Shakespeare’s greatest achievement. However, while that tale seems to just fade out at the end with the death of Timon, Scott needed to muster more excitement, and so wove in a romance between two truly sympathetic people, which seems impossible of fulfilment. The Dwarf is transformed, just before the end of the novel, from an enigmatic misanthrope to a tragic hero. Scott does this in revealing the Dwarf’s most unexpected and chequered personal history. But most of all, the Dwarf, now Sir Edward Mauley, foils the scheming plans of the Virtuous Maiden’s embittered father to wed her to a cynical peer, and makes the marriage of the two true lovers possible. Having distributed his fortune to those who need it, Sir Edward retires into obscurity. One day, the sad news of his death is brought, but by this time most parties have received their natural due.

This personality transformation is, I would suggest, the main defect in Dwarf. The metamorphosis is too extreme. One will suspend disbelief for a novel, it is a necessary condition of the novel. But that token of trust should not be abused. The novelist establishes the parameters of the disbelief with each word he writes. In great novels, such as Lord of the Rings, that confidence is never betrayed: the tale is a seamless and consistent whole from beginning to end. To spring surprises which beggar belief is to detract from the success of the novel. Even Scott admitted that he had rushed the ending.

But along the way, the tale passes through many delightful and instructive posts. The narrator is the wittily drawn school master Jedediah Cleishbotham (“flog bottom”). This was part of Scott’s refusing to be named as author (novelist was not, as it is now, a badge of honour for a lawyer, which Scott was). He had fun with the critics who insisted that the author of Waverley could not have written this and other stories. They gave wise and weighty reasons for their opinion, e.g. influenced doubtless by “the higher criticism”, they said that the novels must have been produced by several hands and “could point out traces of the patch-work, which it was perverseness or want of taste not to distinguish.” (see Johnson’s life of Scott, p. 558) But they were all wrong. Humans are more versatile than the higher critics like to admit, probably because it makes their work so much more difficult.

Further, Scott used the novel in his later work (e.g. The Bride of Lammermoor), with much greater success. In Part Two, I will set out sections of the novel, with some commentary, by way illustrating why it has made such an effect upon me.