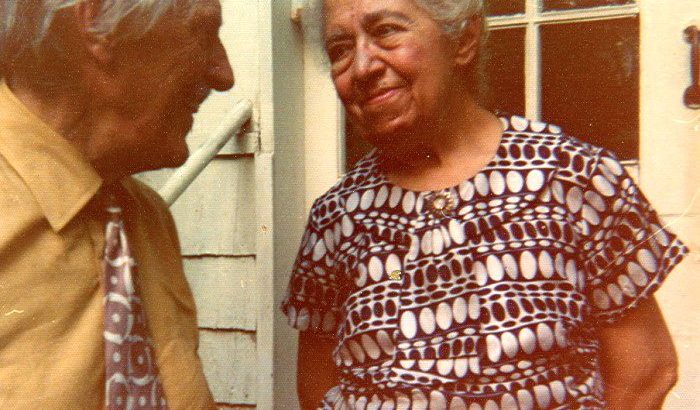 As we continue this work with chief feature, some things become clearer. First, to struggle with chief feature seems to always involve losing belief in a story. That story is the fictional idea of myself which comes with chief feature. I might be wrong, but it appears to me that just this effort to not believe, is fundamental when I am up against chief feature, because all my life something in me (personality) has implicitly believed it.

Chief feature is something with which we have been living since we were children. It formed, I tend to think now that it must have formed, before we were old enough to reason about it. That is, it must have crystallised when I was too young to be able to reason about my impressions, to compare memories, to critique, analyse and conclude. This, I suggest, is why chief feature is both pervasive in my psyche, and why it seems so right. We are accustomed to it. True. But not only accustomed, that is too weak a word.

Let us go back to the example of someone who suspects his chief feature is that he is haunted by the past. All the life he can remember, this has been the case. He does not realise that other people are not haunted by the past to the same degree. Perhaps it is of the nature of every chief feature that is is shared with everyone else to some degree. If our individual chief features are like our fingerprints, as Nicoll suggested (see the previous articles), then just as what is unique about our fingerprints is the configuration of whorls, loops and arches and lines which everyone has, so too, the same may apply to chief feature.

The individuality of fingerprints has another result: it means that as long as chief feature is active, we live our own uniquely distorted world: our perceptions and conclusions are biased by chief feature, and we cannot see that until we have some representative of real “I” to stand outside our personality.

The haunted person of our example, does not realise that he does not have to live as he does: he does not know that he can recall the past without being, very often, shaken. He does not understand that the important thing is to try and change by being present, by seeing where he went wrong, and so providing an aide to being more present when similar circumstances recur, as they will. To remember is natural, and to him, to be tormented by regret or self-recrimination seems natural, too. He sees other people sometimes react that way, and he thinks it must always be right. He sometimes sees other people with no regrets, no pangs of conscience whatever monstrosities they may have perpetrated, and he feels glad that he is not so self-satisfied, so callous.

As soon as he can say: “this is chief feature”, he is able to say “this is a pathology”. And with that comes his first real chance for freedom. Irmis Popoff states that Gurdjieff said that: “man’s work begins when his struggle with his chief feature starts” (Gurdjieff: His Work on myself …, 220).

Also significant is that chief feature provides a line to our work. In fact, because of the nature of chief feature, it provides a steady line. It is always there. The work against chief feature will always provide the shock we need to pass an interval. We only need to remember it.

The struggle with chief feature also provides a certain confidence: not an overweening brashness, but a humble confidence: I know that I am flawed, I have this feature, but at least I have seen it, and now I can work on myself, using the energy generated by that struggle.

After I had written the above (except for the quote from her book, which was added later), I revisited Irmis Popoff’s writing on this, I found that there was a great deal of depth in her comments, and felt grateful to her for sharing it. One evening, Ouspensky said to her “You are always inventing things. … That is your chief feature. … Now you are luckier than most people. You know what most people spend years trying to find out. Use it.” (Gurdjieff, 218-219). Something in her was able to accurately write that down in her notes. But she immediately forgot it. Gurdjieff came, and she joined the groups established. They even discussed chief feature, but not once in many years did she recall what Ouspensky had said.

She does not say how much later, but some years after Ouspensky had said that, she found the notes. It came back very clearly, but she was shocked. “It makes no sense. This is not true of me” (p. 220). She relived the moment. She stayed with it, and struggled. She now saw that even as he had been speaking, she had been inventing. As she turned to her present life she saw that “inventing is what I was engaged in now” (p. 221).

She then makes this very important comment: “How, indeed, could I struggle against this, which was my very self?” (p. 221). This tallied exactly with what I have found: that the new self must start to form before the old can be seen. She states, quite memorably:

And then it happened. I cannot put into words the feeling that came over me. I saw so much, so rapidly. … it was a real milestone in my personal work on myself. I saw my chief feature as a medal, its sides advantageous or harmful, useful or useless, desirable or undesirable, depending upon which one of them I flipped” (p.221)

There is a very deep principle there: it is related to the way of thinking which we call typology. A type can be thought of as a medal, and the antetypes are what are formed from the medal, as if it were dipped into wax. She is saying that chief feature is something like this. When she says that it has two sides, I think it probably more accurate to say that we have the two sides: essence and chief feature. To “flip” chief feature is to approach essence.