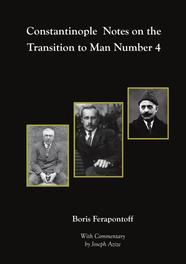 Boris Ferapontoff was one of Gurdjieff’s most important pupils. He is one of the few whom Gurdjieff mentions in any of his books. Gurdjieff terms Ferapontoff his (Gurdjieff’s) “personal translator,” who became one of three managers of Gurdjieff’s business: both honourable positions, and all the indications are that he discharged his obligations honourably, too.

And now, after much work on three continents by many people, the notes of the teaching which he made in Constantinople are finally to be published, with my commentary and attempt to interpret the more obscure parts (which were often the most enlightening passages, once they had unfolded for me): for details, go to

This publication is important, if not only because these notes comprise the first comprehensive summary known of the teaching in all its branches. The only earlier document is “Glimpses of the Truth”, and that does not compare with these notes for coverage.

Yet, the publication is not an end in itself. It is but a means to an end, that the method (the ideas and the practices) be better understood and much better used. Those acquainted with the system will understand why this is so critical: it may be more necessary for our welfare now than at any other point since Gurdjieff’s death.

Bennett was surely correct when he said that the present age is marked by an increasing velocity of deterioration. For a while, I did not wish to see it. I would focus on good developments and changes in general attitudes for the better (e.g. the growth in environmental awareness).

But I have started to wonder: perhaps the increase in awareness is actually a function of the increase in danger. After all, it is not as if everyone is now taking urgent action to cut down on the production of waste, and to ensure that future generations will not be handed a much abused and depleted planet. Gurdjieff said that when a process is in stasis, the appearance of one feature produces the production of the opposite. Is the care for the environment simply the automatically produced opposite of the gross exploitation of it which we have seen?

Where is the deeper understanding of the environmental crisis which someone like Mrs Staveley possessed? It is not just a case of saving some endangered species, important as that is, it is more a case of understanding reciprocal maintenance, and the role of conscious evolution in making that possible!

Consider that Ferapontoff said that organic life on earth serves as “duct-endings” which suck in food for the planet, and will absorb human emotions, such as terror of invading armies (and how much of that there has been in history). He specifically states, on Gurdjieff’s authority I would conjecture, that the fear of the Normans in the Middle Ages lives on in the form of bacilli, and in new modern diseases.

The world-view Ferapontoff provides in these notes is extraordinary. There is a significant amount of information in here that will not be found elsewhere, especially in terms of the laws structuring our world (for example, there is a fascinating chapter on Karma which presents something entirely new in the Gurdjieff literature).

The main difficulty with publication was that the notes were sometimes very concise, even to the point of obscurity. It was not easy trying to interpret some of them, and there are a few places where I have had to admit to being unable to penetrate Ferapontoff’s meaning. However, there were many more occasions when something which seemed hopelessly opaque became clear with a fresh piece of information, or a change in perspective, a new state, or some combination of these.

It was not easy to work through these notes, but it helped to adopt a respectful attitude to the task, as if I had been honoured to have been given the chance to not only help bring this test to light, but to help enlighten its meaning. It is impossible not to start to feel some deepening connection with the three main men behind these notes: Gurdjieff, Ouspensky and Ferapontoff himself.

Many others have special relationships with the first two, but very few have that kind of connection with Ferapontoff. Working on this book was something of a service not only to the work, but also to Ferapontoff himself.

Where there is a gift, even a gift of knowledge, there is a corresponding responsibility. This volume is one way of discharging an obligation which began, really, when I met Mr Adie, because before then I had not received anything much from my reading. So, there is an aspect of repaying a debt to him, too.

Something else occurs to me, as well: Ferapontoff put together in an orderly format what he had learned in a short intense period of time. Is it not necessary that the more we have gained, the more we are obliged to make our own efforts to put it together for ourselves? The responsibility for repayment of our debt is only one aspect, and perhaps not the most important.

I could be wrong, but I do think that the more one has gained, the greater the risk of having it slip through our hands if we do not make one whole organic body of it. We receive many ideas, we learn many methods, we obtain many perspectives, but are we really following a line unless we have used our understanding to lay out the line before us? Perhaps everyone who has got beyond a certain point has to put it all together in their own way. It is certainly a test. Funny how many people would rather argue away the test than take it.

I’ll close with a thought from Ferapontoff: he says that we always make a fundamental mistake, we expect every novel to end with a wedding. So he has read his Jane Austen. But he goes on to say that we have no grounds for being assured of a happy ending. And that, in a nutshell, is why we have to make the efforts we can, not only for ourselves and for our families but also for the work.