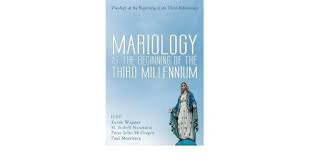 An essay of mine, “The Virgin Mary in Ancient Christian Tradition,” has been published in the book Mariology at the Beginning of the Third Millennium. The book, edited by Kevin Wager and others, is now available.

It deals with some rather diverse Marian topics: e.g. the Mother of God as Protectress of the Two Romes, and an essay on two alleged Marian apparitions in Australia. I had intended to write a fuller review, but time has beaten me. I shall have to just explain what my article was about.

It is the first part of what I hope will be a series exploring the earliest Christian traditions concerning Mary the Mother of Jesus. Here, I challenged the standard view that St Mark depicts Our Lady in a negative light.

I accept, as highly probable, the thesis that the earliest of the canonical Gospels is Mark. It unequivocally mentions Mary, the Mother of the Lord, only in 3:31-35 and 6:1-4. In the NAB translation, which I use where applicable, the relevant sections read

He came home. Again [the] crowd gathered, making it impossible for them to even eat. When his relatives heard of this they set out to seize him, for they said, “He is out of his mind.” The scribes who had come from Jerusalem said, “He is possessed by Beelzebul”… Mark 3:20-22a

After the “kingdom divided against itself” passage, the Gospel continues:

His mother and his brothers arrived. Standing outside they sent word to him and called him. A crowd seated around him told him, “Your mother and your brothers [and your sisters] are outside asking for you.” But he said to them in reply, “Who are my mother and [my] brothers?” And looking around at those seated in the circle he said, “Here are my mother and my brothers. [For] whoever does the will of God is my brother and sister and mother.” Mark 3:31-35

Mark has Jesus travel and then return to Nazareth:

He … came to his native place, accompanied by his disciples. When the Sabbath came he began to teach in the synagogue, and many who heard him were astonished. They said, “Where did this man get all this? What kind of wisdom has been given him? What mighty deeds are wrought by his hands! Is he not the carpenter, the son of Mary, and that brother of James and Joses and Judas and Simon? And are not his sisters here with us? And they took offence at him. Jesus said to them, “A prophet is not without honour except in his native place and among his own kin and in his own house.” Mark 6:1-4

I note that the translation “his relatives” in 3:21 for the Greek hoi par’autou is not a literal one. Referring to the dictionaries and to Bortone’s book on Greek prepositions, I show that it means something such as: “those who were by him”. I concluded that the phrase hoi par’autou in Mark 3:21 was probably intentionally undefined: they were Jesus’ “people”, surely friends or relatives or both, but so vaguely put that one might wonder whether even the evangelist had a clear idea of who was encompassed by the phrase.

So it does not say that the relatives of the Lord had this view: that is an interpretation. But some scholars say that it must mean that because St Mark had a habit of “sandwiching,” and in both 3:21 and 3:31, Mark must be referring to the same people. However, this begs the question of how St Mark’s “sandwiching” operates. When you look at all the examples of it, something unexpected arises: St Mark does not always refer to the same people in both parts of his sandwiching. So why should we think he does so here?

The fact is that in St Mark 3:31-35, there is no criticism of the Lord’s family. Rather, by saying that those who do the will of God are his family, Jesus valorises (affirms the worth of) family relations. If it was meant that the family were to be seen in a negative light, Jesus is not paying his followers any great compliment. The point of the verses is that those who follow God’s will are especially close to Jesus.

Then, in St Mark 6:1-6 where Jesus states that he is a prophet without honour, the Lord does not specifically include Our Lady in his comments about being a prophet without honour. That can be maintained only by insisting that the terms “relatives” and “family” must include all Jesus’ family without exception, even his mother. The Gospel of St John is quite clear about the disbelief of Jesus’ brethren. But this is never claimed of Mary, whether in the Gospel of St Mark or elsewhere.

Second, let us consider 6:4 within its context. Jesus’ comment is directed not against his relatives, but against the many who heard him and were sceptical of his authority on the basis that they knew his family.

By answering the sceptics in his “native place” by reference to his relatives and family, Jesus is administering a rather gentle response. He is saying, in effect: “Can I expect better from you when I am not honoured even within my own family?” I think, also, that Jesus is telling them that their familiarity with him has blinded them to the reality they are witnessing. So the passage as a whole is, I submit, kinder and even sadder than is usually thought, but not so “negative” and not so directed at Mary that one can see an implicit incompatibility with Mary’s knowledge of the virginal conception: but I do accept that some of Jesus’ family would not have known or believed in it.

To understand Jesus’ attitude more fully, we must site 6:1-6 in the context of Mark’s statements about Jesus’ family and disciples. There is a steady tradition in the Gospels that Jesus’ brethren are to be included among the sceptics. Given the terms of John 4:44 (“For Jesus himself testified that a prophet as no honour in his native place”), and 7:5 (“For his brothers did not believe in him”), I quite accept that tradition as historical.

I deal with other issues, but that is sufficient to say that Our Lady was not among the disbelieving.