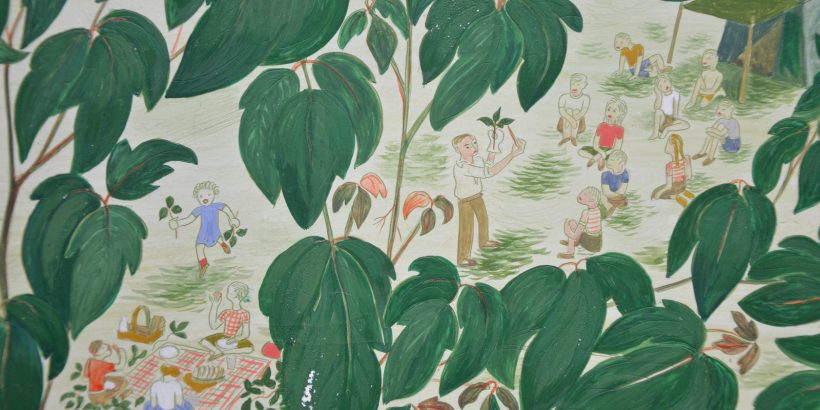 This is from a transcript of a meeting on Wednesday 16 November 1988, at Newport. Some of the exchanges have already been published on the web. Jill said that she had been working on her attitudes, and seen that she has negative attitudes.

In the course of his reply, Mr Adie said: “There are some things in respect of which I need a negative attitude. But you may find yourself always being critical, tending to negative emotion.”

After making some comments about this, he added: “Think of what an attitude means. It means an awareness, a mode of thinking, a forward look, and intention, a sense of moving and also a sense of something settled. We use the word very freely, but without any consciousness that it signifies the whole complex of life.”

“It’s a tremendous thing to have a right attitude. But if I think that I can just select a right attitude, without considering all those elements I have mentioned, I am setting myself up for failure. “Attitude” involves posture: mental and emotional as well as physical, and will call for a certain courage. It is related to the speed of my reactions. The relative influence of things. Everything.”

While Mr Adie had been speaking, Jill kept making a noise: “mmm”. Mr Adie understood quite well that this was her way of expressing disagreement. By the way, I recall that he once said of people who say “I will think about it,” that you could not wish for a stronger opposition. It was typical of Jill, as I remember her, that she would bring an observation that, for example, she had negative emotions, but heaven help the person who acknowledged it let alone agreed!

Mr Adie continued: “See, a gas-bag cannot have a conscious attitude. The gas oozes out, and there is no solidity. There needs to be something objective, a fact in me, before I can speak of having an attitude. But what is in me now is amorphous.”

“I cannot have an attitude without having an intent.”

“And an intent without feeling would be useless, because it is the feeling which brings the power. So, if I have an attitude, I have three forces: an active intention, a need which is the field upon which it operates, and the feeling of myself as I am.”

The next question was from Gary, who said that he had forgotten the work during the week, and seen that he is always identified with being busy.

“So, it is no good busting myself. I can only do what is possible. But the first question is, what is necessary? What I need first is my aim, and a plan to achieve it. If my self-will goes into my aim, I will again become confused. To ask what I need gives me actual and immediate knowledge of my place and my relation to the world and its levels.”

“If I identify, I try and hold it.  But that makes it worse, because that goes against the laws. The awareness of the law is an added thing: it only lasts a moment. But my business is to expand that moment.”

Gary asked Mr Adie what he meant by working against the laws. “If I am identified, the laws of evolution cannot be actualised,” replied Mr Adie, and Gary said that he now understood.

“Think of a prophet: he is a very, very high being. But what does a prophet signify to us? Surely his life would be of a different order. He would be under different laws. He has to calculate all the laws of cause and effect, including the law of accident. The prophet can act. As he prophesies, so it is fulfilled: and that is in that picture (of John the Baptist). The artist knew that. He comes out of the tabernacle to go into the desert, and here it is, fulfilled. He is full size. He is bigger than the mountains.”

Mr Adie was referring to St John the Baptist Goes into the Wilderness by Giovanni di Paolo (see p.98 of my John Lennon: Harmony out of Pain) for a reproduction of the picture, and an explanation of its esoteric meaning.)

“Such a thought lifts me above my considerations and pettiness,” he continued. “I am not entitled to throw away such a thought. It merits a little time. It calls me, and then, I return to life again.”

The power of higher thought, and this idea that there are some thoughts I am not entitled to throw away (perhaps they are gifts from a level of greater intelligence) run counter to the concepts of the age, but are all the more valuable for that.