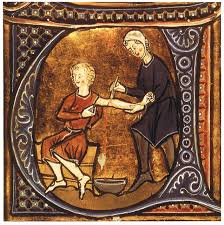 This continues the meeting of Wednesday 9 November 1983. I have presently extracted one exchange from it, highlighting Mr George Adie’s astonishing comments under the title “Not to Have to Mourn when we Part” (http://www.josephazize.com/wp-admin/post.php?post=797&action=edit)

The first question was from a woman who said that she “had allowed” her negative emotion to cut her off from her mother-in-law who had been staying with them.

“When you say that you allowed yourself to be cut off from her, that cannot be correct,” remarked Mr Adie. “But what is important is that the effort can be there only for a moment, a flash. But the effect of that can remain, and that can lead to another flash. And then, how to play my part? I am part of the total. All things have been arranged according to laws. So now, for a moment, let me be as responsible as I can be, together with all the things that exist in objective reality.”

“It shows how little we can do: almost nothing objectively. We can have a wish, and something of a presence, which can support an interest. All the miracles were done like that. And our work is a miracle. To be able to take some part in a simultaneous change from a dark state to a more open one is extraordinary. That is a change in my feelings.”

The next question was from Ruby, who spoke of an exercise based on the difference between incoming impressions and outgoing, and how important it was to her.

“In the first ten minutes, the emphasis was inner,” said Mr Adie. “And in the second, my attention was here, but not totally. I want to be sufficiently present to know that. Without that consciousness of the outer, I have no inner. And without the inner, I have no consciousness of the outer. Both are necessary, but there is a difference, after all, there are three forces for everything. They happen in a certain order. The act is simultaneous but there is an order. There are six basic triads, made of three forces, active, passive and neutralising, acting simultaneously but in an order. How is the order expressed? In emphasis? In speed? Or perhaps both? See, it takes us into a different realm. We have to free our understanding a little bit.”

Then, said Ruby, although she had not succeeded in the exercise, when she attempted it, her state was considerably affected for the better.

“This is the whole thing,” replied Mr Adie, “to attempt it. If I attempt to do it, there is a result. But my ordinary head tells me to aim at something which does not correspond to this work. My ordinary head cannot understand this work. Certainly, it has to be accompanied by some conscious feeling. And then, I find I am using a higher part of the head which can understand a bit more. A part of my head is suitable for shopping, another for living and making love, and the third part for the aim in life upon which everything depends. So there are different layers, different centres in my body.”

“We don’t wish to have an observation, as you did, and to leave it without having understood it. If I see something, but then move on to the next thing without working on it, it doesn’t crystallise in me. Crystallisation takes place, minute grain by minute grain.”

Julie then brought an observation about how unfair she is with the husband’s son.

“Yes, and I sometimes get a glimpse of who is walking through the door …” Her voice petered out.

“This is not something you have chosen,” responded Mr Adie. “It is something which has taken place. You haven’t been able to move from this dreariness. I get into a mess with the people I want to live with, and if I don’t see how I got into it, I am not likely to be able to escape. This is where the acceptance comes in – accepting the situation, because that it is what you have to work with. It is not so easy to be free, for a moment or two, of my normal reactions. It is possible, if I really wish for it, but not for long.”

“See, suppose you get a glance from the eye of a twelve year old, and you see a little contact there, it is a fact. He may not realise it consciously, but subconsciously he knows. I cannot expect a whole morning to be like that. I cannot expect him to appear different, and me to also be different.”

“To see it as a possibility for work would be the only way forward,” added Julie.

“I thought that was what we were talking about. It doesn’t mean anything without that. Otherwise, it is just ordinary “I”s, without meaning, not for us. I am glad you put it like that. Each little “I” only wants what it knows.”

“Now there are shafts of light, and moments to see. If I settle to act for a moment, occasionally, and not to try and evade things, it is amazing what can take place. I can build a different chain of associations. See, supposing I have been at enmity with someone. It has happened in life that people can’t stand each other, then they break each other’s noses, or blacken each other’s eyes, and then they fall on each other’s necks and are best of friends. They love each other, in a way. Or I despise a person, then circumstances change, and for a moment I see a different person. If, by intention, I can have a moment where something passes, then that is fantastic. But I have to acknowledge that it is through that person that I have had that moment. They may not be conscious, and perhaps I am having a moment of relative consciousness. Nevertheless, they have been part of this situation, and there is a lot going on there.”

“Perhaps in the past my manifestations have not been at all true. It doesn’t matter. At last I begin to see and to understand. It shows that there is a certain attitude even in ordinary “I”s which has some approach to reality, even some respect. But these ordinary and decent “I”s are not enough for our work, because if they are disappointed they are immediately displaced by other “I”s, and suddenly we’re negative. What we want is more continuity of our reason. It is only a small inner act that is needed, but it can start something which will have a big effect.”

(The illustration is a 13th century image of blood-letting.)