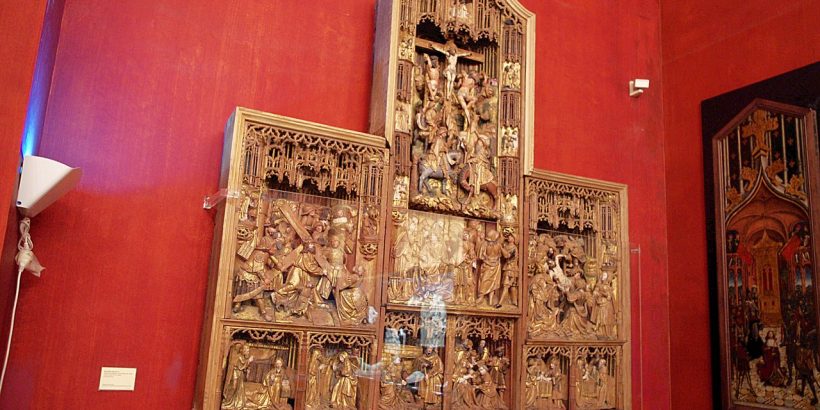 This is the morning address from Sunday 6 April 1986. It is a fit offering for the Feast of St Joseph. Mr George Adie is speaking.

Yesterday we tried to work with mindfulness of the very fine moments of inner stop which are always available. Without words. The inner reality. The aim to be present at this moment. “I am.” And it’s already gone again. Self-realisation, and then be prepared for the next one. That doesn’t mean being tense. You’ve got to cast away and go, go into your life. But there can be another moment. Yesterday, people came with some kind of search, to try and experience the reality of the moment, movement at one level, and something still on another, simultaneously.

It is so simple and so vivid that it eludes us, strangely enough. It’s like putting fine spirit on a charcoal fire. It seeps through and sometimes nothing happens, but sometimes it catches fire and it flares up. The whole of our life on earth is charged with duties and obligations, and yet, all this time we project our own fantasy image onto it. It doesn’t correspond, generally, to what is outside, and so we do not meet our obligations.

What is the way out? We have to live both lives. So how to make them correspond? If I think of the difference in tempo, the difference in the speed of centres, the difference in the speed of one level from another, it begins to give an inkling of how they can co-exist. While I do this work of moving centre, cooking, digging earth, or whatever I am doing, I could, according to my own plan, use moments to remember the higher life which is always there, at a finer speed. And as I move this object, I take a moving stop. Some quiet intelligence prepares the movement, so that it really goes there. The work will go better. Well, that is attention divided between two points of one action, but there are many, many fresh concepts necessary to understand everything.

I expect that some of you have heard of this argument of the theologians about how many angels could dance on the head of a pin? Some said ten million, some said a hundred million. Did you think as I did, when I first heard it, well, this is a bit barmy? What is the profit in that rubbish, getting involved in such a complicated argument about angels on the point of a pin? But that was just part of my youthful arrogance. Those people were not necessarily candidates for lunatic asylums, and I see now, that it was quite possible, and that this was some formulation they gave then to try and convey the idea of a different form of life: the fineness of an angel, that fact it is so very fine that it can penetrate, a million on the point of a pin. Perhaps they even understood that it was ubiquitous, that it also occupied the entire universe. The angelic intelligence penetrates everything.

So this was the work we were trying to do yesterday: I try and have today a moving, wordless, stop. Well, what is the idiot talking about now? How can you have a “moving stop”? Obviously, you can’t. But that shouldn’t bother us. For us, every stop should have some movement. There are intervals in movement. If something is to come in from one level to another, then only at the gaps, the intervals between ME and FA and SI and DO, can it enter the corresponding level of another line of action.

Consider the different levels. Take the level of the function of my thinking centre when it’s not using words, that’s very fine indeed. Take the speed of the emotional centre, as compared with the speed of moving centre which is, again, very fast as compared with the speed of the ordinary lower thinking. Again, you know how it is said that in order to understand this level I have to understand the level above and the level below, otherwise I cannot place myself. When I work, I try and have as often as I can, a moment of a sort of stop, an awareness, so fine compared to my usual automatic goings-on that it is a stop.

It’s a relative stop, and we try to have that, because that’s how our higher experience comes. It comes with many things: light, ideas, everything.

We get defeated because we think that to remember we have to do it for half an hour. But it’s not possible. For a brief moment – see! – and it’s already gone. But if I acknowledge that, then after another short time, there can be another such moment.

And you get the idea, the experience, of almost a continuity. I am beginning to remember myself. If you take a fully developed man, he remembers himself. There is this continuity. We want to use these possible flashes, or rather the ideas which are made possible about them. Have I managed to convey something? You think I have? It’s not easy.

Try, when we’re working today, to have this idea in my work, of every frequent moment a stop. Then I can work. I don’t have to stop working. I work, but I have an inner stop. I don’t think about it, I just have that added experience of an inner life without words. Instantly words will come, but that’s different. I know it’s gone, the words come, I even allow them because they might reconnect me. Try and work that way. Try and see what experience you have.

Another thing was that when we stopped on the half-hour, and I am working with John, I stop, and then, after a minute I turn to him. And when I turn, I wish to be open, free of ordinary criticisms, and just be open. I want to be safe. I am safe. I risk it. Not to peer at people, not to look at them. I don’t have to look at anybody, I just want to be open to them.

Of course, I can be open to them without looking. That is possible, but we turn because we want this challenge to really open to another. And try and work well, and do the jobs well. I have a note here. “Let the key to this day be the conscious response to the demand for a moving wordless stop.” See, now that I have had to put words to it, it is gone. It’s too long, it’s gone already.

“Let the key to this day be the conscious response to the demand for a moving wordless stop, and my work, to be the experience, and hence the knowledge and understanding of this formulation.”

Just for a second, I remember myself. I don’t go and knock the milk over or smash anything. Everything is quietly brought under control.

Mr Adie’s thought was extraordinary. It went so quickly that he sometimes left important connecting ideas unspoken. Rather than change his text, let me try and fill out what I believe he meant. I will take one paragraph, and add my own words in italics:

“Consider the different levels. Take the level of the function of my thinking centre when it’s not using words, that’s very fine indeed. Relative to the work of the formatory apparatus, wordless thought is still, but its tempo is unbelievably fast, and so there is an experience of moving and stopping together. Take the speed of the emotional centre, as compared with the speed of moving centre which is, again, very fast as compared with the speed of the ordinary lower thinking. The life of feeling is so fast and rich the body cannot grasp it, but if I am present, I have the experience of both. Again, you know how it is said that in order to understand this level I have to understand the level above and the level below, otherwise I cannot place myself. But when I can place myself, I am present at once to the diverse tempos. When I work, I try and have as often as I can, a moment of a sort of stop, an awareness, so fine compared to my usual automatic goings-on that it is a stop.”

Incidentally, this may explain what Ouspensky meant by “thinking long thoughts” (The Fourth Way, 234 and 345). The higher thought itself, like every thought, is too fast for measuring; but if and only if I am present, I can receive the impression of the thought through higher emotional centre, and it is transmitted to the ordinary head in a concentrated manner, but its opening in the ordinary head is lengthy. I think we have all had the experience of an illumination, and then struggling to find the words to express what we saw. One notable feature of this is that the illumination takes a split second but the articulation of it takes far, far longer. (see now Part Three below, 7 April 2018)

Yet, it is also true, or so it seems to me, that there is an experience where the higher mind is still and calm, and sees in one glance the bustling activity of the lower. Sometimes one can been a busy street with cars and trucks whizzing past, when all of a sudden there is a silence there, as it were, beyond the noise. So, from this perspective, a moving stop is when the higher mind appears at a window and sees what is happening in the street below.

Next, I am very impressed by Mr Adie’s thoughts on this question of how many angels could dance on the head of a pin. As it is, he is correct. The earliest known parallel seems to be from a 14th-century text, the Swester Katrei (“Sister Catherine”), where it is written: “doctors declare that in heaven a thousand angels can stand on the point of a needle. Now explain to  me the meaning of this.” It is a mystery, and note that it is speaking of what happens in heaven. It turns out to be a very fitting image for Mr Adie’s line of thought: that what is infinitesimal in heaven, when unfolded here, is much grosser.

Finally, his explanation of the unique stops we had at Newport is good. One day, perhaps, someone with understanding will be able to use this idea again. I again record it that it might not be lost.

After I had posted this, I came across this confirmatory aside in Ouspensky’s A Record of Meetings, from his group of 4 July 1935: “Perhaps if we were able to use higher centres, which have longer ideas, we could know” (p.53).