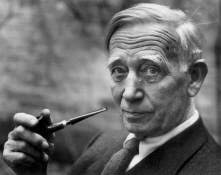 This is an intriguing volume. To my mind, the book it most closely resembles is the Pentland Collection Exchanges Within. Given the history between Nyland and Pentland, a comparison would not be inappropriate – yet, I am not going to engage in one here. I think the more valuable exercise is to approach this book on its own merits.

First, it is nicely presented. The cover is simple and classic, the typeset clear and legible. The preface is to “the second edition of the 1500 series.” There is no preface to the first edition, neither had I heard of a first edition, and an internet search yielded no results. I would guess, then, that the first edition was a private one. This preface gives a little background to Nyland and how he came to attend Gurdjieff’s initial presentation at the Neighborhood Playhouse in February 1924, along with his wife Ilonka Karasz (for whom see my earlier post http://www.josephazize.com/2017/01/07/enchanting-modern-a-review/.)

The description of Nyland’s time with Orage, from 1924 to 1931, focusses on the readings from what they call All and Everything (but on this page seems to be Beelzebub), the discussions with Orage, and the idea of “Objectivity,” a rather unusual concept to put front and centre, yet quite fitting, for the book, Beelzebub, was described by its author in the subtitle as “objectively impartial.” A digression, but a needed one, suggests itself here: in both Herald of Coming Goodand in Beelzebub itself, Gurdjieff is clear that All and Everything is the title of the three series written in ten books, and that First Series, in three books, is An Objectively Impartial Criticism of the Life of Man, or, Beelzebub’s Tales to his Grandson.

Moving on, in 1946, when the Nylands went to Gurdjieff in Paris, he asked Wim Nyland (Ilonka seems to have been included in this) to reinitiate regular meetings in New York, and from these flowed the present American groups (if there were numbering on these pages, these would be pages viii-ix, given the clue in the Table of Contents). What follows next is, I suspect, of more importance than the compilers of this volume articulate:

Gurdjieff’s last visit in the winter of 1948 ended with a final lunch at his departure in February 1949. Tasks and responsibilities were given to those who were there at the table. Gurdjieff gave Mr Nyland special instructions regarding the exactness and clarity of the ideas. He was to report to him if there were any deviations. Gurdjieff said, “I trust him.”(ix)

The editors then offer the pregnant observation that “the prescription for Work in daily life” is found in All and Everything, by which I am not sure if they are now referring to the First Series only, or to all three. I would think it is far truer of the three series as a whole than it is of the First Series alone. Oddly enough for someone who pointed to his exact fidelity to Gurdjieff’s ideas, the editors note that Nyland spoke of the “three Omnis – Omniscience, Omnipresence, Omnipotence – Consciousness, Conscious, Will” (ix). Why rephrase Gurdjieff at all? And are these adequate reformulations or even aids to memory?

Then we come to the nature of the book itself, and the unenlightening title: there were apparently 2,606 meetings with Nyland (recorded or otherwise, it is not stated), from which 100 which took place 18 December 1968 and 4 June 1969 form the “1500 series.” That suggests to me that there had been, perhaps, 1499 meetings before then. The meetings were held at various locations across the USA.

Although it states that the themes are ‘arranged sequentially by meeting at the back of the book” (x), there is no page reference there, so I found that rather useless. They made the decision to restrict this volume to excerpts from that series, yet, to make a point, they then quote from 29 October 1969, probably a memorial for the 20th anniversary of Gurdjieff’s death (xi). Note, too, how in this excerpt, they have “that that what is expressed.” This is either an innocent error (in which case I have nothing but sympathy for them, being prone to such errors myself), or else, they are following Nyland’s expression literally: and there does seem to me to be too much of that. Sometimes even the master’s words can be tidied up, but perhaps the editors would see that as a presumptuous sacrilege. Sometimes a foot note would have helped: for example, in the interesting passage on Bach, Nyland spoke of “fusion of man becoming nothing” (50). I have read and re-read it, but I am baffled. Again, Nyland mistakes the title of the Second Series at p.117. Why not correct it, or at least explain why he said Remarkable Men I Have Known? Sometimes his use of English is odd: thus I doubt that phrase he really wanted at p.189 was “let your hair down in public.” Something like “drop your mask” was possibly more what Nyland had in mind. But then, the people who knew the speaker always have the advantage. I may be wrong in my conjectures, but the editing still leaves me guessing.

Next, the editors tell us when and where each meeting took place, but I think an index with page references would have been of more practical aid.

So I am not wildly enthusiastic about the editing and care in presentation. That is a double shame, because the material here is very good. I would stop short of saying that it is essential, but it is certainly valuable. I suspect, however, that it will be of more use to those who knew him, or his direct pupils, than to others. From the examples I have given above, you will see I found the text to often be cryptic. Once more, I am sure the editors would say that so too is Gurdjieff’s writing. Maybe. But this is meant to be a practical aide to using Gurdjieff’s teaching, and it almost needs a practical aide to understanding it. Also, this is not of the same level as Gurdjieff’s own writing, and I am certain Nyland would not have claimed as much. Then, if one reads the transcripts of Gurdjieff’s meetings, they are miracles of clarity and conciseness, for the most part, as I noted in my recent volume on Gurdjieff and mysticism.

Yet, all this criticism has a point only because of the high quality of what Nyland brought. I feel a gap between the two levels. When Nyland is clear, as in the paragraph which straddles pp.272-273 (“The process of Work on oneself changes the mind”), it is enlightening. I would take his searing words on “the necessities and responsibilities of ordinary life,” at p. 299, and ask the editors, did they take these words to heart when they edited this volume?

There is much useful, even significant material in this book. It is recommended to all those with a practical interest in Gurdjieff’s ideas. But it is idiosyncratic, and I think a little editing could have helped removed that particular distraction.

p.s. Mr Adie knew and much liked Wim Nyland. When I showed him the Popoff volume on Nyland, he was terribly disappointed. He felt that Nyland had deserved something more substantial than that. Well, he now has it. Whatever criticism of the editing I may have offered, I would not say that this book is not substantial.