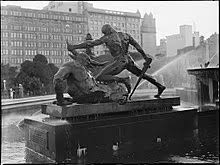 This is the fourth excerpt from the meeting of Tuesday 2 October 1988. Trixie said: “Even though I want the quality of the work in my life, and lately I’ve been seeing horrible things of what I am.”

“Yes, well that’s good, that’s very good because there are horrible things about everybody. But what is a horrible thing? That’s the question, there’s all sorts of different kinds of horror, and the horror is to be a thing, that’s the horror. I mean a pencil, to be a pencil would be a horror, because it’s dead.”

“It’s just I feel I am going to grow old and just to be a nothing, with all these habits, and new issues, even feuds in the family. I mean years ago, I didn’t ever think there would be a feud, and yet now there’s this thing inside me … due to things that have happened, and they’re not good. That’s just one aspect, another aspect, the personality …”

“Take that one that you just described, you give a little deep detail there, you said an existence of a family disagreement, family feuds.”

“Alright, something that could end up as a feud, that means to say, fairly strong disagreement and argument.”

“It’s more inside me than anybody.”

“Of course, it’s all inside you! That’s what you’re talking about. Whether the other members of your family have the same thing or something similar, is not guaranteed, even if it may be probable.”

“It’s just a horrible feeling of non-relationship with a particular person, my in-laws. Due to it, I never ring this particular person, and even if we do meet there’s a part of still being nice. There’s still this, like a grudge inside me that’s quite horrible.”

“Yes, if you’ve got a negative rotten part, like an apple and you cut it, you’re very disappointed, you find a lot of black stuff in the middle. Some mouldy pips, and suddenly even the skin does not look quite as good as it had.”

“It’s just something, I wouldn’t of thought I ever have really, but, things like that develop,” Trixie kept countering Mr Adie, although she had brought the observation.

“Well alright,” said Mr Adie, “you’ve got a nice solid meal there, maybe a dripping roast for a long time. It’s not so easy to end feuds. It’s not so easy to get in touch with people and feel kindly towards them when you’ve been shunning it, and not ringing, and dodging the issue whenever you could. But now, you want to take that and use it, you’ve been given that, you’ve seen it, you know it’s negative and it’s leading to this nothingness which you fear.”

“You can’t afford that. You depend on exchange for your life. If you go on with that you will get a disgruntled, vicious possibly, old woman. If you don’t do something about it, your face will be different; it will take on lines and have expressions which you would very much wish otherwise. So this is good now, you’ve got something definite to work with. And when you think about it, you ought to take definite steps in order to change that state. It is a state that you get into, not all the time, but when your thought happens to turn to the in-laws. That’s when they come. That’s right, isn’t it?”

“Well, then what are you going to do about it? That’s your, that’s your question. There are many approaches, many methods to change your attitude.”

Trixie was puzzled: “How to do it without being, well, how to change my attitude, but then, I know there is something false, there’s some sort of false thing lurking there.”

“Of course, it’s false,” said Mr Adie, “that is why you need to take steps. If it were true and objective, there would be no need.”

“What if I rang this person,” asked Trixie, “and just work? I have feelings I can communicate.”

“If it isn’t too far to travel, then go and see them. If it is too far, there’s a such thing as writing. Take some action in the affirmative way, in a positive way, a positive direction. It would be very interesting, it’s a chance to actually make an effort. We’ve been told many times to look for resistance, and here is resistance without any question.”

“As it is, you try to dodge, and get away. You become disconnected, and retain your bad opinion, or your accusation, or your grudge. That’s the position.”

“I’m a speedy person,” said Trixie, “I move quickly, I do things quickly, I have this sort of thought, “Oh, I can’t fit the work in, I haven’t got the time for it.” Not so much like that, but a feeling in my body that has that flavour to it.”

“Well, the body doesn’t know much about the work,” Mr Adie replied. “The head is what you need for the work. The body only offends because the head isn’t doing its work. If you had a decent thought, the body would behave beautifully. The body would behave beautifully. (Mr Adie pants) the heart wouldn’t pump and blood rise, no it would be quite right, it’s your thought that produces all that.”

“I need to see it quick enough before I get lost taken in it,” offered Trixie.

“Yes, it means you have to take a while, steady yourself, try and balance your sensation, your feeling and your thought and then really remembering yourself try and think what it means. I’ve got a bad attitude to this, to my family, or to these persons or to that person.”

“I need to remain there in order to really see, really think, and realise that the things you complain of are very likely things that you might even do yourself. And see what grievances you’ve got about them, but try, and not in the old way of justifying, saying that it’s all their fault. Don’t go into faults, just try and see your negativeness, how you are. Mmm?”

“In order to find a way, I need a different point of view, I need to be slightly more upright. Don’t stoop like that when you want your better state. That’s one of the benefits of changing your posture, you get a little higher. It’s really very practical.”