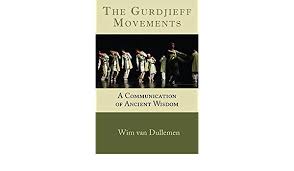 Wim Van Dullemen, Gurdjieff’s Movements: The Pattern of All and Everything, replublished and available in a limited edition at https://www.bythewaybooks.com/pages/books/20986/wim-van-dullemen/the-gurdjieff-movements-a-communication-of-ancient-wisdom

When I say that this book is essential for anyone interested in Gurdjieff and his legacy, I am aware that I sometimes seem to either praise a book quite highly or to be dismissive. From one perspective, this is not true: my review of books such as Notes on the Next Attention came down somewhere in-between. But there is another point here: a book on Gurdjieff will often, perhaps usually, either grasp something real, be written around an objective insight, or it will not. Sometimes it will be mixed, as with the book I mentioned. But perhaps more frequently, when there is an objective insight there is enough in the volume to warrant lauding it; when there is not, there is a sort of word salad.

Well, this book is essential, and it is based around real insights, but objective and subjective, for the author relates the book as the fruit of his on-going pilgrimage. It begins with this sentence: “On two occasions, my life has been touched by something extraordinary.”(7) It closes with “I think that this is what I have learned through the years from the teachings that I have endeavoured to speak in favour of in this book.” (238)

Between those two points, we learn how van Dullemen met the Gurdjieff Work, and are presented with his studies into Gurdjieff, the man and his ideas, and finally the lengthiest and most stimulating treatment of the movements known to me. It is a fitting accompaniment to the more inner-oriented writings of Jeanne de Salzmann, Solange Claustres, Pauline de Dampierre, Marthe de Gaigneron, and the not to be forgotten essay by Michael Smyth in Stopinder 1.

The book has 246 pages, including a DVD of a film (available separately from the new edition). It is written in two main parts: background, and Gurdjieff’s Movements. The first part speaks about Gurdjieff’s life and legacy as a whole, his means of passing on what he had found, and with Beelzebub’s Tales, the groups, the teaching, and the music. Part two deals with the Movements, from several overlapping perspectives, including a study of the three main phases of Gurdjieff’s development of Movements, whether the dances were originally devised by him, or whether they were replicated from what he had seen (it is a bit of both), the music for the movements, the efforts to record them (especially by de Salzmann and Jessmin Howarth), their transmission after his death, and recent developments (most particularly how they were learnt and passed on by some of Osho’s pupils.) There are countless miscellaneous insights and interesting facts in this volume.

What I wish to stress is Wim’s central insight that there is something objective about the actions and the postures, the music, and the movements as a whole (at least, this is what I understand his central insight to be). The movements as a whole and each movement can and should correspond to a feeling-reality, to the music as a whole and to each single sound, to the rhythm and a single movement: each individual element calls the other and evokes the whole. I think, properly understood, the book as a whole “serves” and “supports” this insight. If one passage encapsulates all this, it is perhaps from the penultimate chapter, when he writes:

“The hopeless situation in which a centre cannot develop, whatever the efforts, can according to this vision only be overcome in one way and that is through the forming of an independent ‘I’, which is the goal of Gurdjieff’s teaching. Only from here can all obstacles be removed. This is the crossroads of the outward and inner form of the Movements and I believe that this is exactly what Jeanne de Salzmann meant when she said that Movements can only be performed by the ‘astral body.’

What comprises the inner form in practice? Every participant in a Movements class must have a picture of Gurdjieff’s teaching and must have made the effort to apply this teaching to himself. … The observations evoked by the Movement act as a sign post that shows us the path we must take. The observations can be the start of the forming of well-determined substances that are stored in the body, a stable reality in contrast to our volatile emotions and thoughts. Movements are the esoteric part, in Gurdjieff’s words ‘the practical part’, of his teachings and as such inextricably linked. (228-229, italics in the original, but I have added the underlining, see also the first paragraph on 227).

That, I think, is the essence of the volume. That alone makes it essential for those with a practical interest in Gurdjieff’s system of methods and ideas, whether one can or cannot participate in a Movements class. However, there are other valuable insights. I would not want to treat these as superfluous but pretty ornaments on a vase. They are critical to the book as a whole. But I can, I think, draw particular attention, first of all, to the testimonies to Gurdjieff’s wisdom: e.g. “those who know …” (33); “Gurdjieff once opened a conversation …” (84); “Later I heard a story that was related by Gurdjieff …” (149, this parable is most poignant and practical); “I permit myself to digress …” (182); “Gurdjieff once related the following story …” (196); and, for me, the most illuminating of all: “This regards an anecdote that, as far as I am aware, is not recorded elsewhere …” (97-98).

There is so much more that I could delve into, some of it quite significant, but I will content myself with one last gem: “I do not know exactly why the practical skills connected with an esoteric discipline are taken too lightly. It could be connected with the fact that people who open up to new spiritual paths, also open themselves up to new possibilities within. They free themselves from the uncompromising and often generally accepted criticism, but the downside of this is that the border between reality and illusion sometimes becomes blurred, certainly in the beginning of this process, and the absence of proper criticism can lead to an overestimation of one’s powers …” (227)