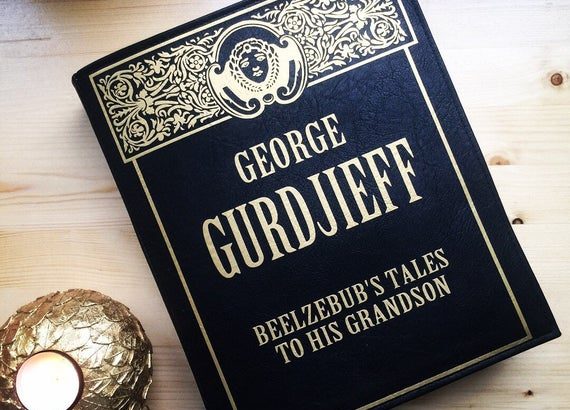 I am revisiting Beelzebub’s Tales to his Grandson, and in an almost complete academic article, I note that Gurdjieff saw it as objective art. Hence, on 21 October 1943, he said to his Paris pupils:

… in Beelzebub I know that there is everything that needs to be known. It’s a very interesting book. Everything is there: everything that exists, everything that has existed and everything that can exist. The beginning, the end, all the secrets of the creation of the world – it is all there. But it must be understood, and understanding depends on the individual. The more a man has been instructed in a certain way, the more he understands.

Objectively, each one can understand according to his level, because this is an objective book, and everyone ought to understand something in it. One person will understand only one part of it and another a thousand times more. Now, find the means to place your attention on all of Beelzebub in order to understand it. …

You did not know this secret. In Beelzebub there is everything. I have said that before – even how to make an omelette … and at the same time there is not a word in Beelzebub about cooking. (1943 Paris transcripts, 233-234)

Apart from the sub-title (“An objectively impartial …”) this lines up so well with what he said to Ouspensky about objective art, that there can be no question: Gurdjieff considered his book to be objective art. If one re-reads Ouspensky on objective art, and then ponders the Book from that perspective, a rather new way of approaching it emerges.

Now, from that perspective, the question whether the 1992 revision was allowable answers itself. To alter a work of objective art, one has to be on the level of the producer of the art: otherwise, how I do not see how one can be sure that one has not diminished it in changing it. I am not saying that someone would have to have been on Gurdjieff’s level to produce objective art. But I do think that one would have to have been on his level to alter his objective art.

So, when I speak of Beelzebub, I speak of the original, the 1950 edition, and not even the earlier one which he had authorised. I do read that text, but Gurdjieff superseded it in some very important respects, as I note in my book Gurdjieff: Mysticism, Contemplation … I have also purchased the Russian edition, and am teaching myself Russian, to at least be able to follow it, and to make my own conclusions on the new words Gurdjieff placed in his book.

And so I come to some questions for you. I would be very interested indeed to know whether any of you play some of Gurdjieff’s music before or after readings from Beelzebub? It has often been noted, especially by Johanna Petsche in Gurdjieff and Music that this had been his original intention. Why he abandoned the scheme, I don’t know. But surely we are not prohibited from experimenting with playing some of the music beforehand, e.g. “Reading from a Sacred Book,” or some of the hymns. After all, we have some knowledge of certain pieces having been written to accompany the book, e.g. “Rejoice, Beelzebub,” “Atarnakh,” “The Bokharian Dervish,” “Hymn to our Endlessness,” and “Hymns from a Great Temple IV” (also known as “March of the Heropass),” and “I AM, Father, Son,” for the Ashiata Shiemash chapters.

So that is the first question. The second question is, how often do you read it in groups, and what do you find?

Third, does anyone have information about how the revision was actually conducted? For example, who actually worked on it? We are told it was under Jeanne de Salzmann’s direction, but in what did that consist? Was it in fact the project of Peggy Flinsch, with different people working on different chapters? I have unimpeachable reason to believe that critical work was done on it after Madame’s death. Does anyone know anything about this?

I would like to be able to post responses to the first questions online, but perhaps any to the third question should sent to me by email.