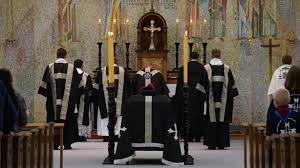 Let me begin from here: when we were with the Adies, we would attend the Russian Orthodox Church each year, when the bishop, his clergy and choir would celebrate the Panikhida. We would forgather in All Saints of Russia Church in Croydon, Sydney, and then return to Newport for a meeting with an austere meal taken seated on our stools. To the best of my recollection, after the Adies had died we soon stopped attending. The service had been organised some very good and honourable students who were themselves Russian. When they left, we let that tradition go.

Perhaps it was understandable, and yet, I had an uneasy feeling about it. My first concern was that we had let the circumstances decide the outcome for us. Had we met and said that we did not wish to continue the tradition, that would have been one thing. But any discussion along those lines was rather fitful, as I recall. My second concern was that we might have understood better what was involved in the service before we stopped it. I am sure that the idea we had was: “We don’t really understand what we’re doing, or its purpose, and it is becoming perfunctory and ritual. Let’s stop that.” I am pretty sure that for a while we had a sort of memorial service by ourselves, without attending the church. But then we stopped even that, for reasons I won’t go into now.

However, I now understand it all quite differently.

I would say that, whatever the situation with the Russian Orthodox Panhidia, the traditional Latin Requiem is a real legominism, a vehicle in which ancient knowledge is preserved. When it is offered with intention, it is an aide in becoming. It calls higher energies down to earth (something which Gurdjieff had said of the Mass when it is performed with understanding).

I am also convinced, from personal experience, that it can help to make a contact with Gurdjieff. I do not mean that to sound spooky: the reality is more concrete than that. Jeanne de Salzmann told Mr Adie that it was good to remember the 29th because it helps us better feel our connection with him (see George Adie: A Gurdjieff Pupil in Australia, 2nd edition). That is at least part of my experience. Although I did not know him, I better feel a connection with him simply because I am preparing to say this Mass for him.

Then, when I say “for” him, there are other prepositions I could use. There is a mystery here. Perhaps I can say more when the Mass has been said. But, for me at least, this shall not be another ceremony. And above all, I might say, I see that it is an absolutely practical way of realising conscious labour and intentional suffering. It is a real effort, and no effort is in vain.

Here is a link to the text of the Mass. I shall be saying the Collect, Secret, and Postcommunion for a deceased man, naming “George” (Georgi in the genitive).

If you wish to obtain a taste of what I am feeling, consider this, the Dies Irae, the sequence from the Requiem Mass: https://www.youtube.com/watch?v=upjugDJd_jo