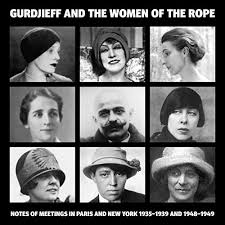 I think it is more than worthwhile to purchase the two audiobooks: Undiscovered Country and Women of the Rope. The first of these, is at https://www.audible.com.au/pd/Undiscovered-Country-Audiobook/B08CFTLNMY

I am not sure which of the two is the most significant. The first can be listened to in the car, but even then, if one listens too long, one starts to lose a memory for significant details. However, I think the second needs an even more careful listening, in smaller portions. It is hard to overstate their value for people interested in Gurdjieff’s ideas and methods.

It has long been known that what one receives when listening to a reading is different from what one receives when reading. This has been reinforced by listening to these recordings. What is the basis of this different? It came to me while listening to the Women of the Rope that the tempo of my reading had been so fast, even when trying to read attentively, that I had missed many significant things in this book. That the discovery has come, more than once, with such an emotional impact tells me that more of my feeling must be available when I am listening.

I also see that there are certain things, such as Gurdjieff’s giving injections to the women, and to himself, which something in me had surreptitiously censored, not by denying or refusing to acknowledge it, but by writing it off as “known.” However, when one has to listen, and cannot speed one’s eyes up and move on quickly, the material has a chance of sinking in. In this case, it confirms how important the body is in Gurdjieff’s system. It also reminds me that there were certain methods he used which we cannot use: the idiots is another one. But that is not the end of the story  – the next question is, what can we use? What should we use?

This period with the Rope was an important one, a stage of transition for Gurdjieff. One can see how the exercises become central to his method (especially the fundamental control of one’s emanations), his insistence on change which does not vanish – what I call “consolidation,” – and that each effort should be an effort of the whole person.

One of the unique things about Rope book is that one often hears the same conversation with Gurdjieff recounted from two different perspectives, whereas in other books, e.g. Undiscovered, one only has the one perspective. This is quite interesting. It’s a good feature. It may help to explain one facet of why there are four Gospels and not just one.

Both are narrated by Mary Castillo. I would allow her 8/10 for her reading. She mispronounces “Beelzebub” as “Beezelbub.” That should have been picked up and corrected. Too often, she places the accents on the wrong word. e.g. “and Dr Bell” at p. 60. It is distracting. But overall, her reading is very good. I am particularly impressed by her rendition of Gurdjieff. I am not so sure about Miss Gordon, sometimes she makes Elizabeth Gordon sound like an idiot. There is little doubt that the women of the rope presented her as prim and proper, but an idiot would not have stuck to Gurdjieff, or – what is more to the point – been allowed to stay with him.