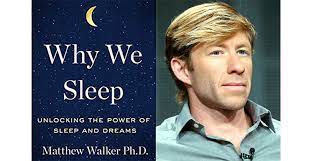 Sleep Is an Esoteric Issue

Matthew Walker, Why We Sleep: The New Science of Sleep and Dreams, Penguin, 2017 (342 pp. plus end material including index)

This is a valuable book: it is in fact the best book I know on sleep. Significantly, it also treats of dreaming and the function of sleep and dreams in our lives. I am aware that it has been subject to strong criticism: the Wikipedia page has the link. From my previous reading of material in this field, I do think that Walker overstates some matters, and a second edition to address these criticisms would be in order. But from what I can see, the overstatements are not significant, and will not cause anyone any harm, as they are in one beneficent direction: they stress the value of sleep. Given the seriousness of the sleep drought most of us live in, this is the only type of overstatement we should contemplate.

Let me try and sum up the book in two sentences: first, our culture makes it difficult for us to get the sleep and the dreaming we need to be healthy, learn to the best of our ability, and keep mentally sharp. Second, we can take more care to spend in bed the time we need, and to nap during the afternoon, preferably before we begin suffering from sleep deprivation.

That is the thesis, and the book is devoted to working through the supporting evidence, and giving advice on how to sleep better. Helpfully, Walker provides twelve tips for healthy sleep in his appendix. These are basically to prepare and adhere to a sleep schedule; to exercise but not too close to bed; to avoid caffeine and nicotine; avoid alcohol before bed, and large meals and beverages at night, if possible avoid medicines which interfere with good sleep, don’t take naps after 3.00 p.m; relax and take a bath before bed,; make sure your bedroom is conducive to sleep; have appropriate exposure to sunlight; and don’t lie in bed unable to sleep. (341-342)

At p.68 he states his thesis in these terms: “Humans are not sleeping the way nature intended. The number of sleep bouts, the duration of sleep, and when sleep occurs have all been comprehensively distorted by modernity.” The book explains how he believes we should be sleeping.

Before I go further, I can say that I have recommended this book to a number people (in Gurdjieff groups and elsewhere), and I think the unanimous verdict has been that it has made a significant difference to their lives. This is what Walker aims: he is something of a missionary for better sleep, hence the strong words of his

Within the space of a mere hundred years, human beings have abandoned their biologically mandated need for adequate sleep … As a result, the decimation of sleep throughout the industrialised nations is having a catastrophic effect on our health, our life expectancy, our safety, our productivity, and the education of our children. (340)

This last point refers to his radical critique of school hours, and what is expected of children and teenagers. But before I pass to a fuller consideration of the volume, I have found people in Gurdjieff groups more open to the book’s message than others. I think this may be because they are already aware of the need to integrate all their faculties (physical, emotional, and intellectual) in one healthy regime. People outside the Gurdjieff work often need convincing that they cannot deprive their bodies of sleep, yet still enjoy the same emotional and intellectual equilibrium they would have when rested. This is why I say that sleep is an esoteric issue (the pun is intended only for those in the work).

Part 1 is “This Thing Called Sleep,” and explains what sleep is and how our sleep changes as we age. The second part asks why we should sleep and illustrates the surprisingly diverse benefits of sleep. Part 3, “How and Why We Dream” explains why it is necessary to have healthy experience of dreams. Finally, in Part 4, “From Sleeping Pills to Society Transformed,” he explains why sleeping pills and alcohol only sedate rather than helping us obtain restful sleep, and he sets out his “New Vision for Sleep in the Twenty-First Century.”

One of the first matters to strike me was Walker’s statement the peak and trough points within our twenty-four cycles different from one person to another (within, I guess, certain limits, and broadly distributed in three ranges). He says that for “morning types,” or “larks,” our “peak of wakefulness” is early in the day with earlier waking and sleep times for optimum performance; for “evening types,” or “owls” it is later in the day with later sleep and waking, and for a middle type for which he offers no avian analogy (let us take a bird I am fond of: magpies), they are somewhere in the middle. The larks are about 40% of the population, and the owls and magpies about 30% each (pp. 20-21). So, if an owl is obliged to awaken too early for their type, “their brain remains in a more-sleep like state throughout the early morning” (21). This is most true of the prefrontal cortex which “controls high-level thought and logical reasoning, and helps keep our emotions in check” (21). Night owls are often thought, by larks, to be lazy. However, states Walker, this is “not their conscious fault, but rather their genetic fate” (21).

Sleep consists of several phases. In the slow waves of NREM sleep (that sleep when our eyes are not making rapid movements), different parts of the brain share information, in what is effectively a “file transfer” (52). Recent “memory packets” are moved from their temporary storage area in the brain, where they can easily vanish, to long-term storage. This leads him to say that waking brainwave activity is primarily for reception of sense impressions, while in deep NREM slow-wave sleep, we effectively reflect upon those impressions, and distil the memories. REM sleep is a time of integration, for “interconnecting these raw ingredients with each other, with all past experiences, and in doing so building an ever more accurate model of how the world works, including innovative insights and problem-solving activities” (53). This is why sleep helps us not only learn better but remember what we have learned for longer.

At the moment, we sleep in a monophasic pattern (i.e. “one long, single bout of slumber at night, the average duration of which is now less than seven hours”), while people with older, traditional ways of life, sleep in a biphasic pattern, with seven to eight hours of sleep at night plus an afternoon nap if between thirty and sixty minutes (68). Now, some of these peoples tend to monophasic in winter, and biphasic in summer, but they all tend to fall asleep two or three hours after sunset, and to wake around dawn (68). This preference for biphasic sleep is biological rather than cultural in origin (69, and I think Walker would say the same for sleeping until about dawn.) A Harvard study of the abolition of the siesta in Greece found that it led to a 37 per cent increased risk of death from heart disease, but among workingmen, the risk rose to “well over 60 per cent;” but where they have retained the siesta, e.g. on the island of Ikaria, men are four times as likely as American males to live to be ninety (71).

Now REM sleep is necessary for the integration of our impressions with our cognitive frameworks (to paraphrase Walker). And alcohol is “one of the most powerful suppressors of REM sleep that we know of” (82), and can even cross the placental barrier and damage the unborn child (and adversely affect its sleep). Alcohol taken by a breast feeding mother is consumed by her child, and interferes with its sleep (84-85) It is easy to see why Walker recommends less alcohol, and even that amount be taken before lunch.

Another finding which should not surprise us is that deep NREM sleep is necessary for the maturing of the brain. If you had thought that the brain inevitably matures and that this changes our sleep, think again: it is the other way around, which shows how important sleep is for the work of the instinctive centre (and possibly also the sex centre). These last terms are of course from Gurdjieff, but they help us better understand what is happening in the organism. And it makes sense: of course sleep is needed by all centres. Even though the instinctive centre goes on working, there are things it can only do or does better when the other centres cannot interfere with it. What is more, deep sleep begins the work of maturing the brain in a pattern: it begins with the back of the brain, maturing visual and spatial perception, and works forward to the front where it “enables rational thinking and critical decision-making” (90). The ingestion of caffeine can prevent this deep sleep in children (91), suggesting that children (and perhaps even adolescents) should not be given it, at least not in strong doses. Walker believes that the evidence suggests disruption of sleep in these formative years may lead to later psychiatric issues (91-92).

I will end my review of this section by noting his conclusion on pp.102-103: “… poor sleep is one of the most underappreciated factors contributing to cognitive and medical ill health in the elderly, including issues of diabetes, depression, chronic pain, stroke, cardiovascular disease, and Alzheimer’s disease.”